Five questions for the face of the lectures program 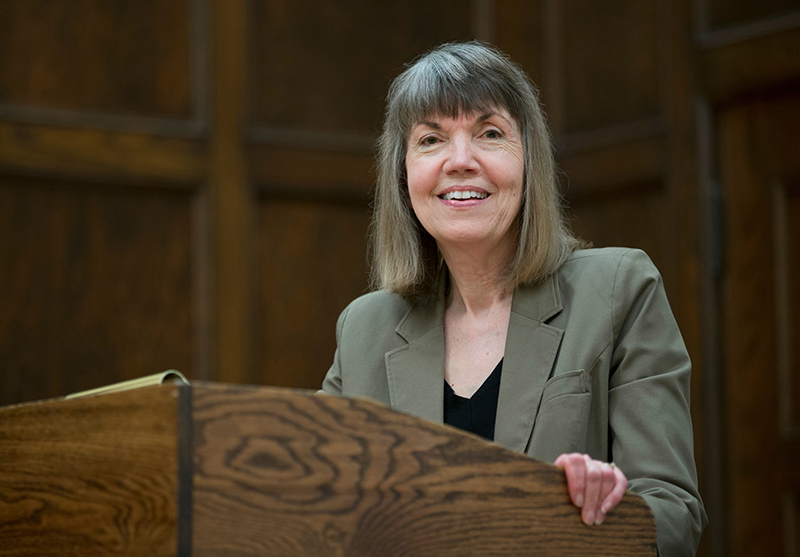 Iowa State's lectures program hit the 60-year milestone this year, amazingly with just two directors during that span. Pat Miller assisted inaugural director and English faculty member James Lowrey in 1980 and succeeded him the next year.

As senior vice president and provost Jonathan Wickert noted at an Aug. 30 60th-anniversary celebration, "There's nothing across the country like our lectures program. Most universities sponsor five to 10 speakers a year, but nothing matches the richness, reach and breadth of ours."

What's the secret to convincing famous, interesting people to venture to Iowa?

It's not that hard. The presidential caucuses have helped put Iowa on the map, so people are curious about Iowa. I always promise a lively and engaged audience of students, faculty and community members, which is true. You learn to be thoughtful in your invitation, to be brief but say something memorable so that Iowa State sticks in their mind. People don't come here who don't really want to connect with the students.

No speaker comes back inside of three years unless there's a reason -- a remarkable thing happens or a wonderful book, for example. But 99.9 percent of the time the three-year rule holds. Some speakers are timeless in their appeal to students. For example, linguist and philosopher Noam Chomsky first came in 1978, returned in 1985 and 2006, and we just had a student group ask about bringing him back. Feminist icon Gloria Steinem spoke on campus in 1984, 1998 and again last fall.

How did you grow the lectures program?

Collaboration. We alert colleges, academic departments, student services and organizations on or off campus to opportunities to co-sponsor lectures. What that also does is layer on audiences and students who otherwise might not know to come.

Who did you work the longest to bring to campus?

Margaret Atwood [writer and environmental activist who spoke on campus last November]. It took almost 29 years. I first invited her in 1988, and I'd see her at book expos every five years or so. When I wrote a second time, I'd learned she was a bird watcher, so in my invitation I told her we'd take her to Rathbun Lake to watch the bald eagles. Or, if she came earlier in the year, we'd take her to the Iowa State Fair to see the 3,000-pound, hand-carved butter cow. She visited Iowa City in 1992 for the Iowa Writers Workshop and I had the chance to greet her during a book signing. I said 'I'm Pat Miller from Iowa State University and our students and faculty would love to have you come to campus sometime.' She quit autographing and looked up and said, 'Ahhhhhh, the butter cow.' It took another 24 years to get her here.

Who were your favorite speakers over 30-plus years?

The next one is my favorite speaker.