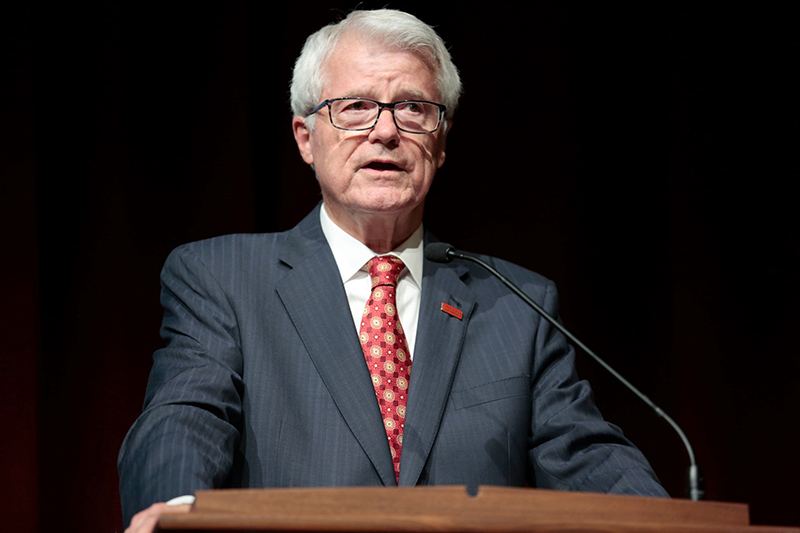 The university's first campus climate survey in 13 years and inclusive discussions about budget reallocation strategies are among interim President Ben Allen's fall priorities, as outlined during his Sept. 14 address in the Memorial Union Great Hall. Both the script and archived video of his talk are available on the president's website.

Noting that an interim leader walks an uncertain line between what decisions to make and those better left to the next president to shape his or her own agenda, Allen said one thing is clear: Iowa State "cannot have a passive interim president."

The online climate survey, for all employees and students, will launch Oct. 3 and remain live through October. A campus working group developed the survey, assisted by consultant Susan Rankin. Broad participation is necessary to get an honest assessment "that can lead to effective, sustainable change," Allen said.

But he also said that the base for building a truly inclusive community isn't programming or policies, but how well individuals connect with each other.

"If we want to break the barriers of social and political tension, we need to build up and invest in personal relationships," he said.

That can be as simple as removing your ear buds or stashing your phone as you move across campus -- instead, making eye contact, sharing a smile or having a conversation. It's every individual's responsibility to reject discrimination, value diversity and participate in respectful, honest conversation, he said.

As has been the case in recent years, Allen said a key challenge this fall is an operating budget that includes less and less state support -- a loss of $56 million over eight years, including about $11.5 million last year alone.

He expressed regret about having to make salary increases optional for the budget year that began July 1.

"I know that over the past decade, more and more has been asked of you," he said, adding his personal appreciation for the effort all employees put in to make Iowa State "an exceptional institution."

"I also understand that words only go so far. You must be fairly and competitively compensated for your efforts or you will look for other opportunities," he added.

A more reliable funding plan for Iowa State requires changes on several fronts, he noted: advocating strongly with state politicians for increased state support, predictable tuition increases (outlined last month to the state Board of Regents' tuition task force), a greater reliance on private gifts for student scholarships, and cost savings. And while he praised the effort and successes of past efficiencies and cost-saving measures, he noted that the savings realized is "not robust enough to make our financial model work."

Iowa State's five-year tuition proposal includes annual reallocations totaling 2.25 percent of the operating budget. Therefore, the next step is making decisions about what the university should be doing, "which means making even tougher decisions on what we should stop doing," Allen said.

In the next few weeks, he pledged to develop a plan for involving the university's shared governance groups in discussions about possible reallocation strategies.

Other highlights of Allen's address: