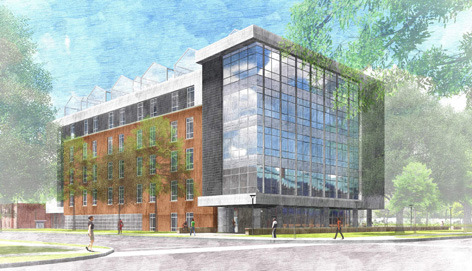 Architect's sketch of the view from the southeast of the Advanced Teaching and Research Building, one of two biosciences projects approved June 4 by the state Board of Regents. The building's location will be the northwest corner of the Stange Road/Pammel Drive intersection. Submitted image.

Iowa State received the final green light from the state Board of Regents last week to proceed with two biosciences projects -- a new five-story teaching/research building north of Lagomarcino Hall and a four-story addition to Bessey Hall.

The Advanced Teaching and Research Building, a $52 million facility, will be supported by state appropriations ($22 million), university funds ($20 million) and private gifts ($10 million). It will house the plant pathology and microbiology department and portions of two others: entomology, and genetics, development and cell biology. It will include space for research and related support, faculty and graduate student offices, teaching labs, formal and informal collaboration, department administration, a plant diagnostic clinic and a lecture hall that's part of the university's classroom inventory. The fifth floor will remain unfinished, pending future needs. Construction will begin next spring and last about two years. As part of this project, the 90-year-old Industrial Education II building will be demolished this fall.

The four-story addition to the east side of Bessey Hall will house undergraduate teaching labs (two floors) and research labs (one floor) for two departments (ecology, evolution and organismal biology, and genetics, development and cell biology), two general university classrooms and support space. The fourth floor will remain undeveloped for now. A four-story atrium will connect the addition to Bessey Hall. The project, which includes modernizing about 8,000 square feet of space in Bessey, will cost $28 million and be funded by state appropriations. Construction will begin next spring and should wrap up during summer 2017.

Noting that "incremental funding to freeze tuition needs to be recurrable" and the Legislature's 1.25 percent increase on the general university appropriation is one-time in FY16, board president Bruce Rastetter said that the 2015-16 tuition freeze approved for resident undergraduates will be guaranteed for the fall semester. When actual appropriation levels are known later this summer, he said board staff will work with the universities to see if funds "allow us to continue that freeze for the spring semester." Rastetter said students and parents need to know what their fall costs will be, and that any changes to spring semester tuition would have to be announced by October. Spring tuition will be part of the annual analysis the board does in preparing its funding requests due Oct. 1 to the governor and the Legislature.

Rastetter: Performance funding concept is not going away

While expressing disappointment that the 2015 Iowa Legislature failed to support the board's proposed performance-based funding strategy for distributing the general university appropriation among the three regent universities, board president Bruce Rastetter said the idea isn't dead.

"The board will continue to have performance expectations of the universities. As we prepare a budget proposal for next year, those details will be put together.

"If we think about 70 years of the present budget model, it ought not surprise anyone that it may take more than a year to have that instituted into the budget of Iowa. So while we're disappointed, we're not surprised that it's going to take longer," he said.

For the fiscal year that begins July 1, in addition to an incremental increase to state operating support, the regents sought an additional $12.9 million, to be divided between Iowa State and Northern Iowa, to implement the first year of performance-based funding without taking dollars away from the University of Iowa.

During his own comments to the board, President Steven Leath expressed his disappointment with the misperception that the performance-based funding model created unintended competition for students in the 12 months since the board approved the model.

"We changed nothing in our recruiting strategies," he said. "Our growth is the result of the student culture at Iowa State, the demand for our academic programs, our high placement rates. It's because students want to come to Iowa State."

Geoff Janes, ISU admissions, was ISU's representative on the portal development team. He said the new portal, which will reside on the board's website, doesn't replace any of the schools' application websites. Students who want to apply to just one school will continue to complete that school's admission application.

The team developed two FAQs to help educate users and will send a letter to all Iowa superintendents, high school principals and guidance counselors to alert them to the process.

The board approved a proposal to distribute $2.5 million among regent employees' TIAA-CREF accounts from a 20-state settlement with Standard and Poor's Rating Services. The lawsuit focused on misleading investment advice by S&P prior to the 2008 financial crisis. The state of Iowa's share of the $1.375 billion settlement is $21.5 million. Of that, $10 million will be added to the state's IPERS fund and $2.5 million will be directed to individual TIAA-CREF accounts.

Associate vice president for business and finance Pam Cain said the distribution works out to $42.87 for each of the 58,317 eligible participants systemwide. The regent schools agreed to distribute by a simple head count rather than try to determine proportional amounts based on the size or movement of individual accounts. Cain said eligibility was granted to TIAA-CREF participant employees who:

In a closed session, President Steven Leath received his annual performance evaluation with the board, but his FY16 salary will be set "at a later date." Rastetter said the board will take additional time "to determine an appropriate level of compensation and to determine performance goals for the coming year." The same deferment is in place for the other regent institution heads and board executive director Robert Donley.