Five questions with an extension specialist 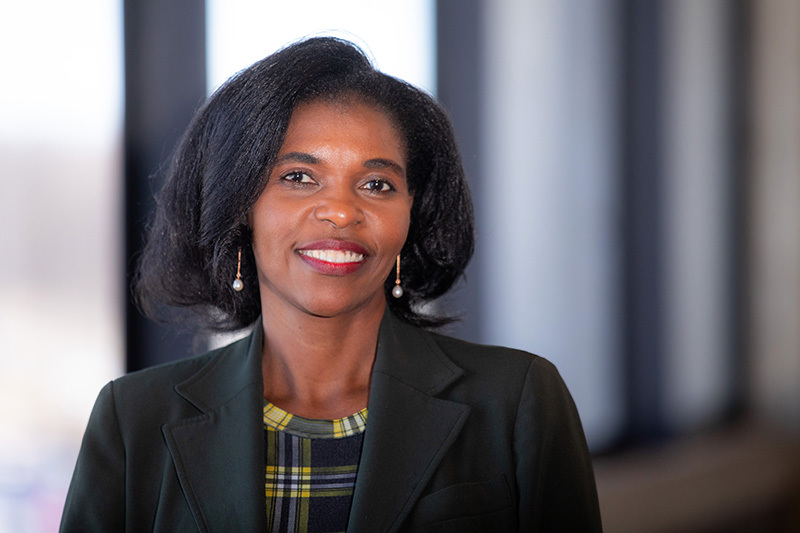 Jeannette Mukayisire is fluent in four languages and uses them often through extension programs. Photo by Christopher Gannon.

Jeannette Mukayisire (M-UU-K-EYE-SEE-R-EH) helps people improve their financial situation. She works with a variety of ISU Extension and Outreach programs, including Volunteer Income Tax Assistance (VITA), Finances of Caregiving and Money Smart. She also is involved with Salir Adelante to help prepare Latinx youth and families for college or employment.

Mukayisire's success is aided by her own immigrant experience coming from Rwanda, which  mirrors, at least in part, many of the people she serves. Mukayisire is fluent in four languages and uses them often through extension programs.  She recently spoke to Inside about her role in extension and how her background helped shape her desire to help others.

How does your work help immigrants and improve their communities?

I cover northeast Iowa and work in regions 5 and 10. I work in Black Hawk County in partnership with the Hawkeye Community College adult learning center where immigrants get their GED or learn English. The county has lots of immigrants who are unaware of the tax system in this country and are being taken advantage of. We brought the VITA program to teach them for the past four years. Now they have a reliable way to get their taxes done, and they can help people in their community if they have a question. I also work with Latin families as well as Somali families in my regions and introduce them to extension programming.

How does your background help in the VITA program?

In the fall, the Internal Revenue Service (IRS) publicizes tax materials and provides training for me before I train the volunteers at the community college and a site in New Hampton. The volunteers have to pass an IRS test and then they are able to do people's taxes.

Immigrant volunteers do not have some of the IRS tax terminology in their native languages, such as a tax refund, so I can explain it in another language that makes it easier for them to understand those new terms.

How did you learn to speak four languages?

I am from Rwanda, and we have a mother tongue that we speak called Kinyarwanda, but when you go to school you start to study in another language. All the material was in the language of the country that colonized you, so for us everything was in French, and that is how I learned French. I also speak Swahili because it is spoken in several neighboring countries.

I came to the United States in 2000. During the genocide in Rwanda, a women from a church in Cedar Falls came to my country. She asked me what my plans were and said I should come to the University of Northern Iowa. I came and studied English before I started taking courses at the university. I also have learned some Spanish because I am running a Spanish program for Latino families.

What is the key to learning a new language?

There needs to be a motivating reason to learn a language. When people don't have that, often they won't stick with it, or they really struggle. Find that motivation, whether it is because you want to travel there, or you're interested in the people or the food. It is that passion that will make you successful.

What motivates you in your work?

When I started, I wanted to help women because studies show they will use money to better their family. I want to help immigrant families be able to make wise decisions with their finances. It is the same reason I wanted to do something when I saw immigrants being taken advantage of when it came to their taxes.

Some immigrants are coming from countries that have experienced war, and I know how that goes because I have been in their shoes. I never expected it, but it has been a good meshing with my life and educational experience.