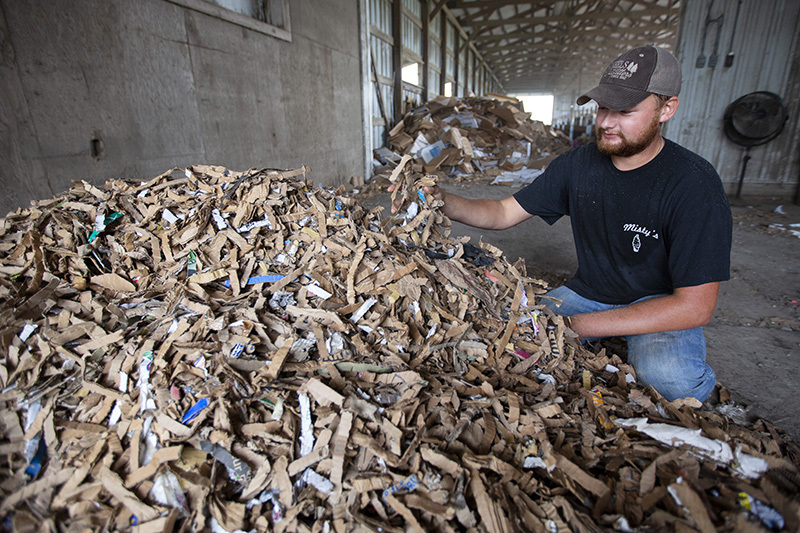 If a waste-reduction pilot project takes off, cardboard recycled at Iowa State could end up back on campus, after a pit stop in a livestock pen.

The initiative to shred cardboard for use at ISU farms as animal bedding -- which is then fodder for the university's compost facility, which supplies material for campus projects and plants -- is one of several efforts launched in the past year as part of Iowa State's goal to become zero-waste by 2025. The projects, many of them trials meant to study what works best, have been headed up by Ayodeji Oluwalana, hired last year as the first full-time ISU recycling coordinator.

"The past year has been laying a foundation upon which the zero-waste efforts will solidify. I know behavioral changes take a while," Oluwalana said.

Here's a look at the recycling improvements in the works:

From boxes to farms

The cardboard-shredding pilot sprang from discussion about the increasingly challenging market for recycled materials, a downturn caused by China's tighter restrictions on imports.

"Because the market has changed, it was a good time to talk about doing something else," said Jayna Grauerholz, a procurement agent involved in the project.

One idea was to find a way to use cardboard, which is collected separately from other recyclables at 63 sites across campus. Three weeks ago, recycling haulers began delivering the disassembled boxes to Iowa State's beef nutrition farm instead of Mid America Recycling in Des Moines, which takes the university's other recycled products. 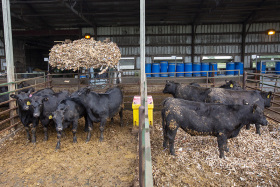 Cardboard is being used as bedding for beef cattle.

Grauerholz said piles of torn cardboard appear to be acceptable bedding, even more absorbent than the corn stalks previously used. But for the plan to work, the soiled cardboard bedding will need to compost well. It's too soon to tell if it will, she said.

"If it's successful, we'll sit down with the stakeholders to determine the costs and benefits," Oluwalana said.

Iowa State would be the first university she's aware of to use its cardboard collections for animal bedding, Grauerholz said. Though it would cut down on transport costs, the financial impact is not the most important factor.

"The main focus is to make the best choices for the environment," she said.

Beginning this fall, in-room recycling containers are provided for all on-campus student residences, including apartments. Recycling had been available in residence halls at central collection areas on each floor, but usage was spotty, Oluwalana said.

"One year, they might have a student who is passionate about it. Then the next year it would fall through. That model wasn't really engaging students," he said.

After piloting in-room recycling in Maple, Willow, Larch and Linden halls in the spring, the program kicked off this fall. Bins and instructions were provided as part of the check-in process. Students haul their own recycling to their building's single-stream dumpsters.

Oluwalana said further education is needed to ensure students don't toss their recycling out in plastic garbage bags, which can lead to entire truckloads of recycling being rejected and redirected to a landfill. Trash bags and food are the biggest contamination issues, he said. To allow for shredding and use with animals, cardboard also needs to be untainted.

In another test, Oluwalana urged his facilities planning and management (FPM) colleagues in the General Services Building to give up their trash cans last fall, leaving their blue recycling bins as the only at-desk disposal option. Losing the most convenient way to get rid of garbage decreases how much potential recycling ends up in the landfill-bound stream. It also cuts down on waste overall.

"You end up thinking about what you're generating in the first place," he said.

More than 50 FPM workers, roughly one-third of the office staff, agreed to forgo trash for two months. At the start of the trial period, an audit of the building's garbage showed 55% was recyclable. By the end, that was down to 24%. Just three employees asked for their garbage cans back, Oluwalana said.

"People felt like, 'Yes, I can deal with this,'" he said, noting that new signs emphasizing precisely what can go in recycling bins helped. (The signs are available to download.)

Oluwalana hopes to extend similar testing to a handful of academic buildings this spring, adding other variables such as having custodians empty recycling bins from desks instead of trash bins. He plans to implement a new scheme for deskside recycling campuswide next fall.

Iowa State's zero-waste goal aims to halt all trash production, though Oluwalana said he would consider the ambition achieved if all plausible efforts keep 85-90% of waste out of landfills. Hitting that mark requires detailed and accurate information about the university's trash and recycling volumes.

"Without data, you can't measure your success," he said.

A new recycling hauler contract began this summer and will help solve the data issue. It requires Waste Management trucks to use dedicated routes for campus recycling, which allows it to provide accurate weights of the material drivers collect because other customers' recycling isn't mixed with the university's.

FPM custodians also are helping by tracking recycling volumes building-by-building, using a cellphone app to record how many 55-gallon bins they're emptying and how full they are, Oluwalana said. With that information, he can address site-specific issues.

About 2,000 tons of ISU garbage ended up landfilled in fiscal year 2019. Extrapolating some trial runs with dedicated recycling routes, Oluwalana estimates that about two-thirds of the total waste generated on campus was diverted from the landfill, including:

Oluwalana aims to expand recycling at campus events, including athletics events. He's recruiting for a zero-waste team to volunteer for awareness activities and event coverage. Students, faculty and staff are welcome to join. Those interested can email him at recycling@iastate.edu. He plans to convene a meeting of volunteers later this semester.

Women in the arts are central to this year's programming.