Compost facility is the answer to varied campus needs

By Bill Zahren, College of Agriculture and Life Sciences
June 01, 2017 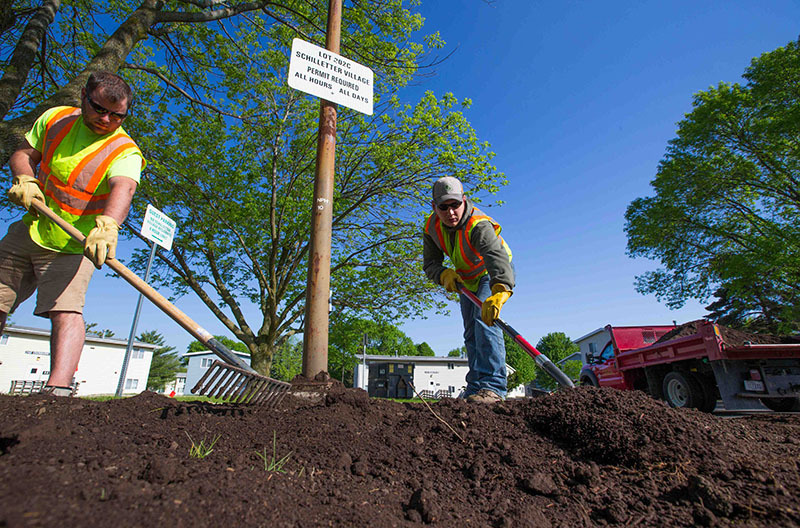 When Iowa State students threw away banana peels, french fries or other food waste in campus dining halls over the last six months, they probably didn't expect them to play an important role in the south end zone project at Jack Trice Stadium.

But that's just what happened, after a circuitous journey that included a stop at the university compost facility, adjacent to the ISU dairy farm south of Ames.

Since 2008, all food waste from ISU Dining — both discarded food and leftover menu items, some 466 tons in 2016 alone — has been made into compost. But the amount of food service waste in the composting stream pales in comparison to the primary source of raw material: cow manure.

"The composting operation opened in 2008, and was built in conjunction with the ISU dairy farm," said Mark Honeyman, associate dean for operations for the College of Agriculture and Life Sciences. "We needed a way to handle and use all the solid manure from the dairy cows. We knew we needed to be good stewards."

The facility, operated by the college, composted 8,424 tons of raw material in 2016. About 77 percent (6,475 tons) of total inputs came from the dairy farm, most of that in the form of solid and semi-solid manure and bedding. The rest comes from:

All the material is hauled to a rural, windswept composting site. It features seven hoop barns, each measuring 80-feet-by-140-feet, and a smaller hoop barn. Startup of the composting operation was partially funded by a combined grant/loan of $246,000 from the Iowa Department of Natural Resources Solid Waste Alternatives Program. Now it runs on fees charged to university units for material coming in and compost going out.

Deliveries are weighed as they come in and unloaded into the center hoop barn. From there, the raw material is put into windrows under the other six hoop barns. It's turned using a special tractor-powered machine once or twice a week for 12 to 16 weeks as the transformation to compost occurs.

Honeyman emphasized that the entire operation is ISU-contained. All the input comes from ISU sources, and all the outputs are used around campus. The facility doesn't accept compost inputs from non-ISU sources, nor does it wholesale or retail the output. 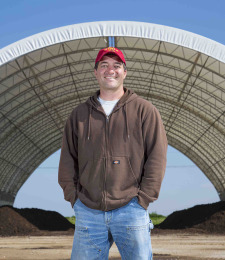 A big part of the success of the operation, Honeyman said, is having a manager like Steve Jonas at the helm.

Jonas, a Remsen native and 2001 Iowa State graduate (horticulture), worked for a landscaper after graduation. He initially interviewed with Honeyman for another job at Iowa State.

"I didn't get that job, but Dr. Honeyman asked me what I thought about composting," Jonas recalled. "I said, 'I don't know a lot about composting' and he said, 'That's okay, neither do we.'"

In some ways, the composting operation started off as a production-scale research project. Jonas, Honeyman and everyone connected with the effort learned by trial and error.

"Snow," Jonas said, shaking his head, "that's the worst. In the winter, the process takes longer. Snow really slows you down. If it's 20 below zero, I'll just leave the windrows sit. Maybe the top six or eight inches freeze, but the inside will be nice and hot, so when the weather starts to warm up, I can take my turner and break through that frozen crust, and the steam just pours out."

Another lesson was that dairy manure keeps coming -- on average, 17 tons every day in 2016 -- so minimizing slowdowns in production was crucial.

Composting is the process of letting naturally occurring microbes break down organic waste to a form that becomes a nutrient-rich plant growth medium. When Jonas puts the raw material in windrows, the microbes start to work in the center of the rows. Microbes breaking down organic material generate heat. The desired composting temperature is about 140 to 160 degrees Fahrenheit. The compost operator can impact the heat by turning it more or fewer times. Turning it more often provides more oxygen to feed the heat source.

The compost blend targets are a carbon-nitrogen ratio of 25 to 30:1 and moisture around 50 percent. The hoop barns provide maximum access for heavy machinery while keeping rain off the compost to control moisture.

The process starts when Jonas -- using a tractor, wagon and loader -- creates windrows 10 to 12 feet high. He then runs through it with a "turner," which uses tines to slowly and gently turn over the compost as it moves down the windrows. About four months later, the composting process has cut the height of the windrows in half, and compost is ready to be hauled out.

Despite the tons of manure present, there is little odor. Jonas makes a special effort to minimize it.

"It mostly has to do with the carbon-to-nitrogen ratio and making sure the compost has enough, but not too much, moisture for the microbes," Jonas said. "Once those conditions are where they need to be, the microbes do their job and it should smell only for a little bit when I turn the windrows."

In the beginning, Jonas said he tried to segregate all the raw materials as it arrived, but because of limited space and the growing volume of materials coming in, he now only separates wet materials and dry materials.

Jonas also has gained enough experience to tell if the mixture of carbon and nitrogen is right by the way it looks and how much steam rises when he turns it. He still takes the temperature of the windrows weekly, but has learned how to use visual indicators as well.

Once the compost looks ready to go, it's sent through a screener to take out any solids, like rocks -- or, every once in a while, an ISU Dining fork. Most of the compost goes out as amended soil, which is a 50-50 mixture of compost and soil. The soil is stockpiled in a hoop barn at the facility to keep it dry until it's needed for a campus project.

In eight years, the operation has turned out about 65,000 tons of compost, the majority of it used for large university landscaping projects such as the one that enclosed the south end of Jack Trice Stadium. Compost and amended soil also are used around campus for ground maintenance, such as filling in worn spots around sidewalks, creating or refreshing flower beds and for many projects at Reiman Gardens.

The compost operation has drawn about 2,000 students and visitors, some coming great distances. Jonas said there's increasing interest in composting, and he gets visitors from other colleges and commercial enterprises looking to learn more about Iowa State's large-scale operation.

What makes it work

Honeyman identified three primary factors that allow ISU to conduct composting on such a large scale. First, there's a steady flow of inputs. The dairy cows producing manure literally around the clock, see to that. Second, it has the right person, Jonas, managing the operation. Finally, there's an outlet for finished product -- the 1,813-acre Iowa State campus.

"Good supply, good execution, good demand all come together to make it work," Honeyman said. "It's all these different pieces that work together. In fact, we'll probably expand a little bit more in the future."

A prescription for pork production