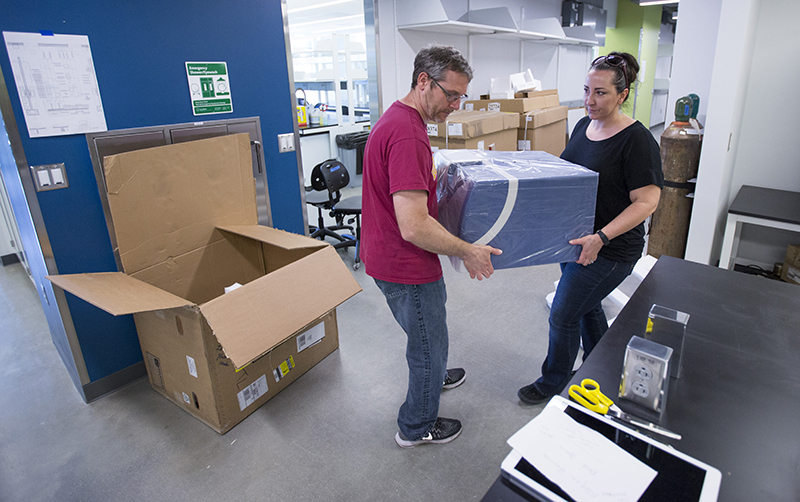 Steve Whitham, left, professor of plant pathology and microbiology, and Jaime Dittman, research assistant, get equipment into place while moving into their fourth floor lab space in the new Advanced Teaching and Research Building on Tuesday morning. Photos by Christopher Gannon.

Plant pathology and microbiology faculty have started moving their offices and labs into their new home in the Advanced Teaching and Research Building (ATRB), which also will house portions of the entomology and genetics, development and cell biology (GDCB) departments.

Unlike most of his colleagues, plant pathology and microbiology professor Steve Whitham is orchestrating two moves. His own lab will shift to the new $57.5 million facility later this month, but he also oversees the department's shared lab space, which moved Tuesday.

"Quality-wise, it's definitely an upgrade," he said.

Care is taken to minimize the disruption for in-progress experiments, but other logistical concerns are more common, he said. Moving a lab, just like moving a residence, is an opportunity to sort and downsize. 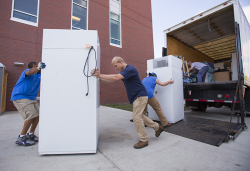 Movers unload equipment outside the Advanced Teaching and Research Building on Tuesday morning.

Years of planning preceded the recent arrival of moving trucks. The state Board of Regents approved the new building in 2015 as part of $88 million in bioscience facility improvements, which also included a $30.5 million addition to Bessey Hall that opened last fall. Funding for the combined projects included $50 million in state appropriations, $10 million in private gifts, and $28 million in university funds and facilities bonds.

ATRB is at the northwest corner of Stange Road and Pammel Drive, just east of Insectary on the former site of Industrial Education II. Occupants are filling the finished lower four floors of the building, where offices and meeting rooms circle a core of teaching and research labs. A lounge and a 122-seat general university classroom sit on the first floor, with study space on each level overlooking the lounge's glass atrium. The roof holds nine greenhouses -- six for plant pathology and microbiology, two for entomology and one for GDCB.

About 18,500 square feet on the fifth floor remains unfinished, but not for long. In December, regents approved a $6.5 million plan to create a headquarters on the fifth floor for the Nanovaccine Institute, an Iowa State-coordinated interdisciplinary consortium of 67 researchers at 20 universities, research institutes, national laboratories and companies. It is expected to open in fall 2019.

P&S Council Meet and Greet, May 22