Forty-three Iowa State faculty received preliminary approval from the state Board of Regents Dec. 6 for professional development assignments in the fiscal year that begins July 1, 2018. The group includes 29 males and 14 females and their plans vary in length from a semester (28), full academic year (12), something in between (two) to a full calendar year (one).

The board's academic and student affairs committee approved the proposals, which will go to the full board in January.

All Iowa State faculty employed at least half-time -- 1,865 -- were eligible to apply for a PDA, typically used to pursue intensive research or scholarship, or prepare publications. Priority may go to tenured faculty over nontenure-eligible, and to faculty who haven't received a PDA in the past five years. Next year's group includes faculty from the rank of Distinguished Professor to assistant professor. Their average length of service is 11.8 years. The estimated faculty replacement cost, net of the salary savings from faculty on assignment for a full year, is $116,000.

Senior vice president and provost Jonathan Wickert told regents it's a competitive application process; not all proposals make it through the department, college and finally university approval process. Faculty are required to submit a final report on the outcomes achieved by their professional development assignments, he said.

The board approved a Master of Professional Practice in Dietetics (MPPD), a non-thesis, online graduate degree in the food science and human nutrition department. By 2024, a master's degree will be required to take the national credentialing exam to become a registered dietitian. Demand for the MPPD program is high among current dietetic internship graduate certificate students -- about 180 annually -- and credits earned in the certificate program will be applied to the master's degree.

An Iowa State request to renovate numerous restrooms at Parks Library cleared both the property and facilities committee and the full board this week. The university will gut and reconfigure 14 restrooms across all five levels of the northwest section of the library. The renovations will provide accessibility compliance and add a family restroom to each floor. Work will be done over the summers of 2018 and 2019. General university funds will cover the $2.3 million cost.

Approved by the property and facilities committee in October, these ISU requests received full board approval this week:

And finally, these projects were presented to the board's property and facilities committee this month and will be forwarded to the full board for final approval in January:

The board approved two bond sales on behalf of Iowa State. The first is for $25.4 million in academic building revenue refunding bonds to advance refund $26 million of bonds sold in 2009 to finance part of the construction costs for Hach Hall. Lower interest rates will save the university an estimated $2.2 million.

The second is $21.5 million in recreational system facilities revenue refunding bonds to advance refund bonds sold in 2010 to finance part of the construction costs for the State Gym expansion and renovation. Lower interest rates will save recreation services an estimated $1.6 million.

In response to Auditor of State Mary Mosiman's Oct. 24 report on the university's purchase of a single-engine airplane in July 2014 and former President Steven Leath's use of it for both business and personal use, Iowa State leaders defended the purchase and said Leath's reimbursement payments to date are adequate.

Mosiman subsequently acknowledged the university's response (but did not audit the content of it) and wrote, "the university should ensure all purchases have a business purpose and the business purpose is clearly documented." Regent Nancy Dunkel, chair of the board's audit and compliance committee, and board executive director Mark Braun had no further comment about the issue. 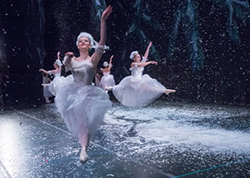 Dozens of local dancers perform in this Christmas classic.