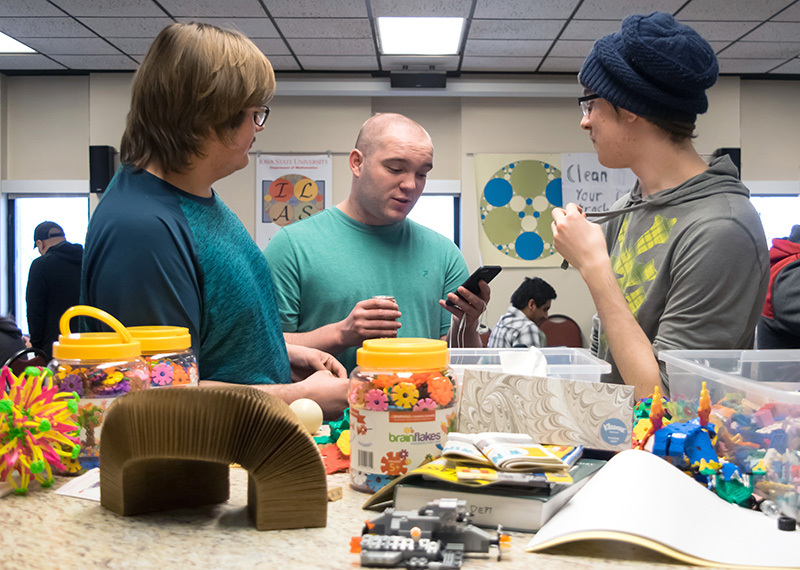 The weekly undergraduate math tea gives students in the department a regular chance to socialize. At the March 22 tea was, from left, Samson Baker, Lance Cordts and Brandon Tague. Photo by Joseph Kastner.

To Steve Butler, math's bad rap doesn't add up. He thinks of math more as recognizing patterns and solving problems than a computational crush of figures and formulas. But there's a widespread notion that it is something to endure, not embrace.

But even a math-is-misunderstood advocate such as Butler -- who has taught a class on the mathematics of juggling and explained the calculations behind card tricks to crowds at the state fair -- concedes one math trope is at least a little bit true.

"I think there is a tendency for people in math to be slightly on the introvert side," he said.

Overcoming that inclination -- helping math students meet and support each other -- is the main benefit of the math department's weekly undergraduate tea, a mixer for socializing with graduate students and faculty. Why tea? It's a reference to the historical tradition of mathematicians mingling at a regular tea time. The ISU spread is just soda and snacks.

"We do now have a hot water dispenser so we can actually make tea, should someone request it," Butler said.

The weekly teas started in 2012 after Butler was hired in a position that includes undergraduate engagement as a portion of the appointment. While a departmental tea is a math tradition, it took time for it to catch on here, Butler said. Just one student showed up the first week. But Butler kept putting out food and encouraging especially social students to spread the word.

The practice slowly became more popular. Now, the student lounge where the teas are held -- a room on Carver Hall's fourth floor that years ago was the department's office -- is pretty near capacity on Thursdays from 3 to 4 p.m.

"This took years to get where we are," Butler said.

About two dozen showed up last week, munching on chips and casually chatting. Many knew each other well. One of the regulars is sophomore Brandon Tague, who was clad as he often is in a sweatshirt adorned with numbers and notations. He said the teas are a time to talk about homework or informally help out other students. There's also math-free conversation -- about TV shows and other classes, for instance.

"Usually it's math, though," he said. "I just like being able to talk to people about math."

Graduate students Kate Lorenzen and Nate Harding said they see it as a way to get away from the daily grind to talk about funny moments from classes they teach or the latest political news.

"It's very easy to isolate yourself when you're doing math research," Lorenzen said.

Butler said the teas are one of several ways the department is trying to build connections with undergraduates. There's also a weekly newsletter specifically for undergraduates and a variety of math clubs.

"It's lot of simple things. The key is consistency and patience," Butler said.

Though the impact might be difficult to measure, Butler believes the community-building pays off in the classroom.

"The truth, I think, is that mathematics is a very social activity. It's important for people to talk to each other and to get to know each other. It helps," he said.