Five things to know about our learning communities 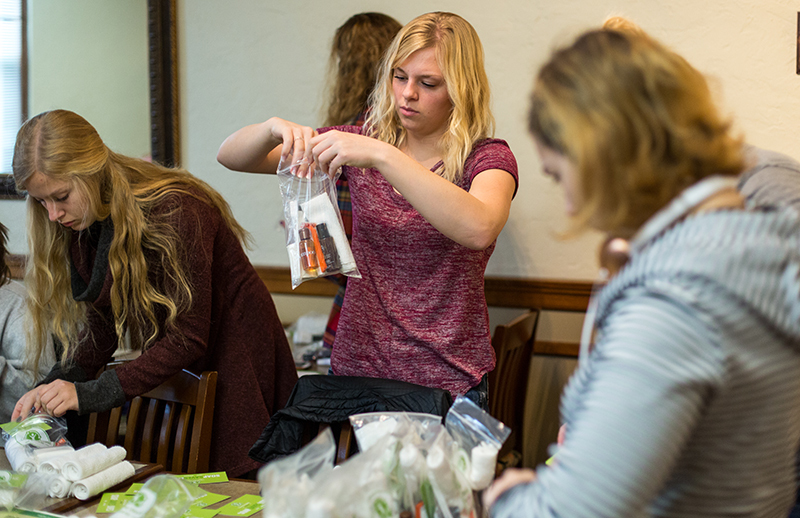 Katie Vande Wall (center), event management major and member of this year's Directions learning community, fills a hygiene kit with soap, shampoo, toothpaste and brush, washcloth and razor during a November session. Directions, for first-year event management or hospitality management majors, has partnered for several years with Orlando-based Clean the World to recycle hygiene products from hotels and resorts. In November, the 50 members of the learning community filled more than 450 kits as a service project and delivered them to five central Iowa agencies serving homeless and low-income Iowans. Photo by Ryan Riley, Human Sciences Communications.

During a decade of surging enrollment, Iowa State's learning communities program more than kept pace to create spaces for the students who wanted to participate. Last fall, 77 percent of the freshman class -- 4,588 students -- joined a learning community, up from a 69 percent first-year participation rate in 2012 and 55 percent in 2007. For freshman students of color, membership was even higher: 83 percent.

Here are five more things you should know about the learning communities (LC) program:

When Iowa State lands on a "best learning community programs" list, typically it's in a minority group of large universities commended. For example, of the 18 "stellar" LC programs noted last fall by U.S. News and World Report, eight were at schools with enrollments between 3,500 and 12,000 students. Seven --including giants such as Ohio State and Michigan State -- have larger enrollments than Iowa State.

"Iowa State learning communities are a great example of a committed partnership between academic affairs and student affairs. It's one of the reasons a program as large as ours can flourish." Leptien said. "All of the faculty, staff and peer mentors involved with the program are dedicated to student success."

At its January institute for LC coordinators, Leptien introduced discussion about Iowa State's six Principles of Community and options for sharing them with both peer mentors and LC members. Last August's peer mentor training intentionally included the principles, too.

"We have the ability to help shape the community and to encourage students to live 'the Cyclone way,'" Leptien said. She has asked LC coordinators -- faculty and staff members who oversee and guide a learning community -- to include practices and outcomes of the principles in their year-end reports.

Iowa State's decade of enrollment growth saw international student numbers almost double, from 2,244 in fall 2007 to 4,131 in fall 2016. Transitioning to college life presents additional challenges for this student group: They're acclimating to a new country, they typically didn't make a campus visit or attend summer orientation, so they register for classes late after many learning communities have filled. To address this, the LC program bought a quarter-time appointment for Suzanne Härle, academic adviser in the College of Liberal Arts and Sciences. Two of her strategies have been to develop additional options within the LC program and collaborate more with registrar staff and LC coordinators to place international students in learning communities.

At his retirement, colleagues and peers of Gruenewald launched a scholarship for undergraduate peer mentors. Each year, some 600 returning students provide essential leadership to LC teams of 12-20 undergraduates. These $500 awards are in addition to the wage or stipend they earn from their learning community's home department. So far, eight peer mentors have used the need-based Gruenewald scholarship to help keep their own educations on track to graduation.

"The scholarship honors Doug's great work to develop the peer mentor program, which really is the bedrock to the success of our learning communities," Leptien said. "It's also a way to do something positive for students with financial need."