Steven Leath is in his final week as president of Iowa State University, the job he's had since January 2012. May 8 is his last day; in June he'll become Auburn University's 19th president. Inside recently sat down with Leath and asked him to reflect on his five-plus years in Ames. 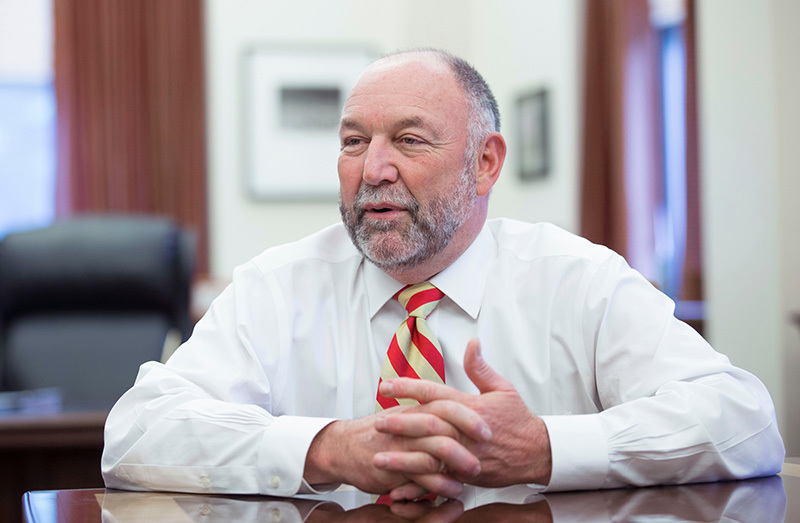 Why Auburn and why now?

If someone had asked me a year ago if I'd be leaving Iowa State now, I would have thought that was very far-fetched. Truly, my wife and I have come to love it here, we think of ourselves as Iowans. Auburn made the right run at the right time. It's a great university, another beautiful campus, and it would be fun to return to the Southeast -- we spent 27 years there. And the things Auburn wants me to do are similar to the things Iowa State wanted me to do: raise the university's profile, build research, grow the research park, help the university be a bigger force in economic development, push their fundraising agenda. These are things I'm good at, so the chance to do that again is exciting.

What three or four aspects of Iowa State do you believe are stronger today than the first year of your presidency?

First would be student success. Our retention rates, our graduation rates, our job placement rates; these types of things excite me because, ultimately, we're about education. At the same time, there was a commitment to grow research, and we have a number of new national academy members, which shows recognition of our research efforts. And our research funding numbers are at all-time highs. Third, one of the things expected of me was to help foster economic development in central Iowa, and when I look at the successes at the research park, the Cultivation Corridor and job growth numbers, I'm really pleased about that. [Economic development] also was one way we could increase our value to the state and help garner more help and more funding through the Legislature. For five years in a row, that worked quite well.

How have things improved for faculty and staff?

One of the best parts of this job are the people, and the faculty and staff we work with every day have been truly wonderful. If you look at their productivity and their overall workload, they've been just remarkable in the time I've been here. We tried hard to put more money into salaries. They told us they needed more help to deal with the growth, and we hired over 450 tenure-track faculty and increased staff numbers. We worked as a team in a shared governance model to say, what are the priorities we really need to put in place -- and then worked to do that. We had remarkably low faculty resignations this year -- something like 24 faculty leaving us -- so I feel good that people want to be here and are relatively happy here.

P&S staff are the heart and soul, the ones who roll up their sleeves and get things done. They told us they wanted more opportunities for professional development. So we put some programs in place, such as the professional development day at Scheman, which was so well attended we almost needed more space. It pleases me to see opportunities like that working the way P&S staff asked for when I got here.

Among the accomplishments achieved by this university under your watch, of what are you personally most proud?

Student success. Students are moving through the ranks, they're graduating, they're getting jobs. One point about our enrollment growth: There was a misperception among some that we had some goal to grow the university and be the largest university in the state. That happened, but it was never a goal. What I'm proud of is that we've made the university so desirable, such a fun experience for students -- and then they get jobs when they leave -- that they want to come in bigger numbers than ever before. But it's not the numbers, it's the demand we created for an Iowa State education that makes me excited.

Who gets credit for creating that demand?

For the most part, it's not Beardshear -- with one exception. The staff and the faculty have done yeoman's efforts. They shouldered a huge burden to deliver the kind of experience we expected -- and parents expected for their kids -- before we could actually grow into it.

I give a lot of credit to (former senior vice president for student affairs) Tom Hill. He saw the merit and value of creating an Iowa State brand for the students. He created a culture here where kids could come and work hard, be successful, get jobs, but also have fun. The idea that half of what an Iowa State student learns is outside the classroom is true, it's what makes it a neat experience.

We have the ability to take tremendously gifted students and turn them out where they can change the world. But I'm almost more proud of the fact that we can take students who maybe didn't have that level of academic success in high school and make them just as successful and influential once they leave here. Not many schools do that as well as Iowa State can.

One of my concerns when we hired so many faculty so fast was that we might lose our caring culture. But in fact we didn't. The new faculty embraced it.

What were a few of your favorite tasks associated with being Iowa State's president?

I like meeting and spending time with alumni, donors, our friends and supporters, not just in Iowa but really all over the world. To learn why they care so deeply about Iowa State and just learn their stories. They come from all walks of life -- astronaut, engineer, chef, clothing designer. The opportunity to interact with them is something I'll always treasure, and I think I've made lifelong friends.

The other thing I'd point to is some of the fun things that involve our students: going to the student section at a football game, eating with them in a dining hall or greek community; those are fun things for me.

What was your best day as president?

There've been a lot of good days. Walking into the Economic Development Core Facility when it was done was more rewarding and moving than I anticipated. We took the park from somewhat of an industrial look to a much grander look. When I envisioned a core facility to move all our economic development programs together, many told me 'You can't build a facility like that, you can't fund a building like that in Iowa.' (It was completed with one-time funds from the 2013 Legislature with permission to spend it over three years.) When I saw all the different units that were extending Iowa State's mission to the state, working cooperatively in one place, that was personally very rewarding.

What was your darkest day as president?

We've had some student deaths and those are horrible days. With the exception of those, the most difficult day was the day we met to suspend Veishea in the year it was still active. To watch students in tears, to have the reality sink in that a 90-plus-years tradition was ending, was particularly painful and disappointing. The discussion that day about ending it and all those implications was a great example of shared governance, but nobody really wanted to own that decision, even though I think I knew where everybody in the room was. It was difficult to make that decision, even though there's no doubt in my mind it was the right decision.

Are there projects, goals you regret not completing?

No matter when you end a job, there's more you could do. You have to come to some reconciliation with yourself on that. But yes, there are a few: I expected the research park to be further along when I left. I thought we'd have a 90 percent first-year student retention rate and a 75 percent six-year graduation rate when I left. And I thought we'd have a billion-dollar endowment. And all those steps are now very reachable; the trend line is there. I fully expect the next president will be able to get there. That will be personally rewarding for me, wherever I am, to see Iowa State get there. I love this place and I'm always going to be a Cyclone. I'll still want to see the university move forward.

As you prepare to leave, what would you like to say to the faculty and staff at Iowa State?

Thank you. You have worked incredibly hard. You've always been willing to give me counsel and advice. You value shared governance, which I do. I've said since day one that universities are like churches: It's not about the building, it's about the congregation. We have a beautiful campus, which makes this place fun, but it's not what makes this university great. It's the faculty and staff. If I could take a bunch of you with me, I would. 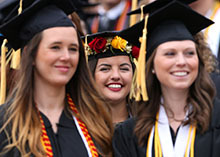