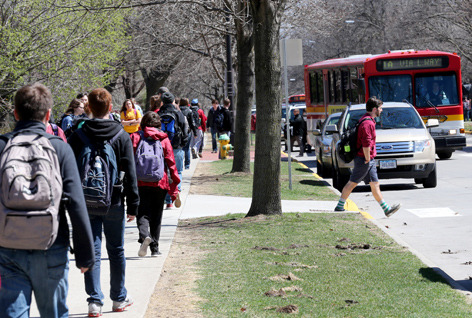 Summer work is expected to alleviate some of the crowding along Osborn Drive. File photo by Chrisopher Gannon.

Osborn Drive will get a lot of attention this summer as crews begin working their way through a list of projects to improve safety on the most congested road on campus.

First up is a sidewalk-widening project that will double the width of the north sidewalk on a particularly crowded portion of Osborn -- the stretch between Physics and Science halls. The new sidewalk will be 13 feet wide, expanding to 16 feet at the Science bus stop, to give pedestrians more room, said Cathy Brown, assistant director for planning in facilities planning and management. Additionally, the edge of the walk nearest the curb will be a contrasting color -- visually alerting pedestrians that they're near the street.

The LeBaron Hall sidewalk area, just across the street from Physics, also will be expanded.

"We're in-filling some of the space on the LeBaron corner to make more room for people," Brown said.

Sidewalk construction is scheduled to begin June 22 and should be completed by Aug. 1.

"The sidewalk is a pilot," Brown said. "If it's successful, we may seek funding to widen other portions of Osborn sidewalks."

Adding to congestion in the Physics and Science area are a pedestrian crosswalk and CyRide bus stop that appear to be a little too close together for safe road crossings. Over the summer, the bus stop will be moved to the east. The move will give Osborn drivers and bicyclists a better view of pedestrians approaching the crosswalk, Brown said. The bus stop will close for two weeks during the sidewalk widening project. Riders will be re-directed to the Kildee of Gilman hall stops.

Parked cars that currently line the north side of Osborn may disappear around by summer's end, Brown said. The plan is to prohibit Osborn parking when a nearby 64-stall lot opens on the former Davidson Hall site. Based on the current schedule, the lot should be open for use Monday, Aug. 17.

Brown noted that drivers who occasionally park on Osborn may wish to use the Memorial Union parking ramp or the prepay lots at the Lied Center (lot 100), Armory (lot 21) and the east campus parking deck

The summer projects are a start, but there's more to come on Osborn Drive, Brown said. Several months of study yielded a number of ideas for improving the road. An Osborn committee is reviewing those ideas and making plans for additional projects.