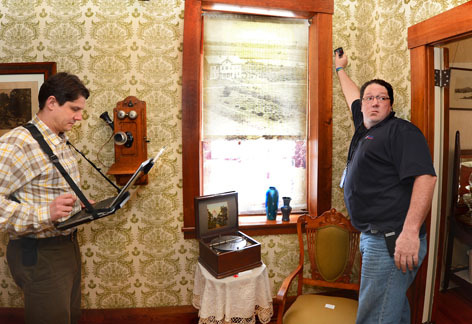 Phones, laptops, tablets, game consoles, printers and more. How many personal electronics do you have? With record-breaking enrollment and the popularity of multiple devices, Iowa State's wireless network is in need of reinforcement.

"The design criteria assumes that each user has three wireless devices on campus and five devices in the residence halls," said Jennifer Lohrbach, ITS senior systems analyst.

Forsythe's two-person tech teams are in the midst of surveying campus and residence buildings, covering about two buildings per day. The techs, who are harnessed with laptops bristling with external modems, take readings from different locations throughout each building.

The data is being used to design a map of enough wireless access points to provide optimal service in campus buildings and residences. The survey will wrap up by the end of the month, and Forsythe should submit its final report to ITS by the end of May.

Using the report results, implementation of the upgrades will proceed as funding allows. The residence department already committed $1.5 million to upgrade access in its buildings and will get started on improvements in its buildings as soon as possible.

"While our initial Wi-Fi installation was the best system available at that time, the current proliferation of wireless device use by our residents has outpaced the capacity," said Pete Englin, residence director. "We're delighted to partner with ITS in serving our future residents with a terrific wireless system that performs far better than anything available off campus."

The university's computation advisory committee (CAC), which oversees the use of student technology fees, has earmarked $2 million in matching funds for wireless upgrades. Lohrbach said funding decisions from a university budget request will be made later this spring.