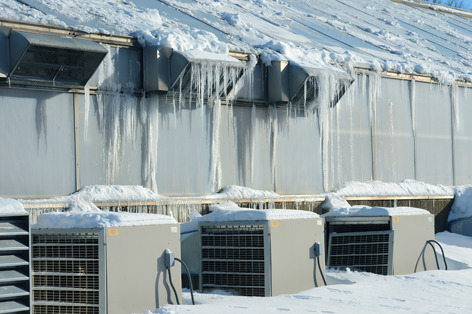 The icicles cascading from the roof of this campus greenhouse help tell the story of this winter's extreme cold. Photo by Bob Elbert.

Mother Nature has dealt us a long, cold, snowy winter, and it's beginning to take a toll on the campus infrastructure.

Potholes are a common winter nuisance, and this year is no exception. Holes are dotting streets and parking lots all over campus, thanks to a thawing-freezing pattern. Facilities planning and management crews are repairing the potholes with an asphalt-based material called cold-patch, but FPM director Bob Currie said it's just a temporary fix.

"We're trying to fill the potholes with the cold-patch now, but they may need to be refilled again when it warms up," Currie said. "It's hard to get the cold-patch to stick to the holes because there's just so much snow and ice."

In the deep freeze

This winter's incessant subzero temperatures have significantly deepened underground frost levels, creating more challenges for FPM. A problem obvious to campus drivers is the speed-bump effect on some streets. The cold ground expands and contracts, forcing seams in the streets to rise. The problem also occurs under sidewalks.

"In some instances, the heaving can cause tripping hazards, so we use the cold-patch asphalt to smooth out the unevenness," Currie said. "Waiting for warmer weather and the subsoil to thaw is the best option."

If warmer spring temperatures don't fix the problem, portions of the affected sidewalks and streets may need to be ground down at the seams or be replaced.

Cracked water lines are another symptom of deep frost levels. The lines break when the earth expands and contracts, putting pressure on the pipes. Under usual winter conditions, the frost line stops above the buried water lines; this year has been the exception.

Crews are repairing the lines as they break, so be on the lookout for temporary lane and sidewalk closures throughout campus for the rest of winter.

The bitter cold is causing problems above ground, too. Drains that lead from roofs and gutters on some buildings are backed up with ice, which means melting snow runs off roofs like waterfalls. In some cases, underground drains are jammed with ice, requiring special equipment to remove the ice.

Again, the best fix for this problem is warmer temperatures, Currie said. But until that happens, FPM crews are redirecting the melting snow to minimize water damage.

The Department of Residence also has experienced some challenges with this winter’s extreme cold. During a particularly cold stretch in February, several sprinkler pipes froze in locations that had not experienced problems before. Broken pipes can cause water leaks and in some cases, short periods of water and electrical service interruptions.

“Our residents have been extremely understanding in situations where broken pipes impact their homes,” said Randy Monthei, manager of residence hall maintenance.  “We partner with FPM, respond to issues as quickly as possible and make repairs so that the issues don’t happen again.”

Cold-weather alerts also are issued to educate residents about closing windows and how to properly operate their heating units.

Currie said FPM employees are used to working extra hours throughout the winter, cleaning streets and sidewalks.  But, he admits, this year has been a challenge.

"We've had a lot of weekend snow events so the staff has had to come in on Saturdays and Sundays a lot lately," Currie said.

Bitter cold temperatures are another concern.

"It's been difficult for the staff working outside," Currie said. "We take frequent breaks to have them come indoors and get warmed up. We need to make sure people are safe."

Though winter has been tough on campus streets and buildings, there is one bright spot. Iowa State's sand and salt supplies are adequate for the rest of winter.

"We're doing okay," Currie said. "We've had a lot of snow but we haven't had pure ice events, which depletes the sand and salt supplies." Currie said streets usually receive a sand/salt mix while sidewalks may receive all sand or the street mix, depending on the severity of the ice event.

"We treat the sidewalks almost every day just because of the ice buildup," he said.

While the calendar says March, it feels more like January. Currie said the negative effects of this winter's bitter cold could last a little longer.

"It probably will be late March before we reverse the trend," he said.