Iowa can take a lesson from the starts – and stops – of states that have experimented with distributing their higher education appropriations according to some kind of student performance matrix, says a leader from a national consulting group. Matt Pellish, director of member education for the Washington, D.C.-based Education Advisory Board, met Dec. 17 with the state Board of Regents' task force studying a performance-based revenue model for Iowa's three regent universities.

Performance-based state funding has been around since the early 1990s, Pellish said, with a dozen or so states abandoning it after four years or less, for various reasons. Since 2010, there's been renewed interest in the concept and nearly 30 states currently use it or are in the process of developing a plan.

"There is no one correct model," Pellish noted.

He said states need to develop a performance matrix that reflects that state's university system and education priorities. Some of the many variables could include:

Pellish said Tennessee is the state everyone is watching. It's been using performance-based funding the longest and its model is very competitive, with 100 percent of state funding tied to performance measures. A model that's too competitive may damage collaboration within a state university system if schools become reluctant to share the practices behind their success, he noted.

Three Iowa State professionals also presented to the task force. Assistant professor of sociology and extension rural sociologist David Peters said that Iowa's population is concentrated in a triangle that includes Des Moines, Iowa City and Waterloo at its vertices. Peters said trends indicate there will be fewer college-age people in Iowa in 2020, but that a higher percentage of them will attend college, whether two- or four-year schools. He also said the college-eligible pool will remain overwhelmingly white, but that there will be growth in the Asian, black and Hispanic minority groups.

Johnson said another factor in the student debt equation is the relatively low level of state financial assistance available for Iowa's public university students, forcing them to rely more on loans. After fluctuating for a decade, state work-study dollars disappeared in 2009 and haven't returned. About $124,000 in state-funded Iowa Grants was awarded to Iowa State students this year, less than 1 percent of the total financial aid picture.

Johnson said the average debt at graduation for Iowa State undergraduates has been steadily declining since a peak in 2008 at $31,616. For last spring's graduates, the average was below $30,000.

Undergraduates with debt: Class of 2013

The task force's next scheduled meeting is Jan. 21, when it plans to meet with a representative of Tennessee's university governing board. The group hopes to include the three regent presidents at its February session. The goal is to bring recommendations to the board of regents in early June.

The sum of the parts
It's graduation weekend
Winter break: A few reminders
Iowa can learn from other states on funding distribution for public universities 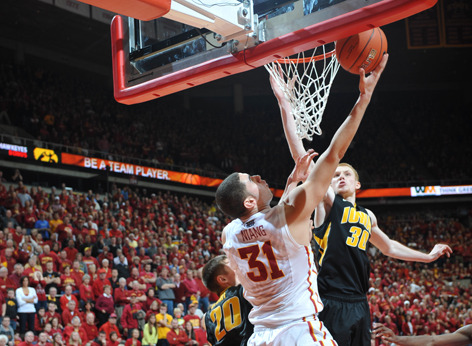 Hilton will be hopping during break