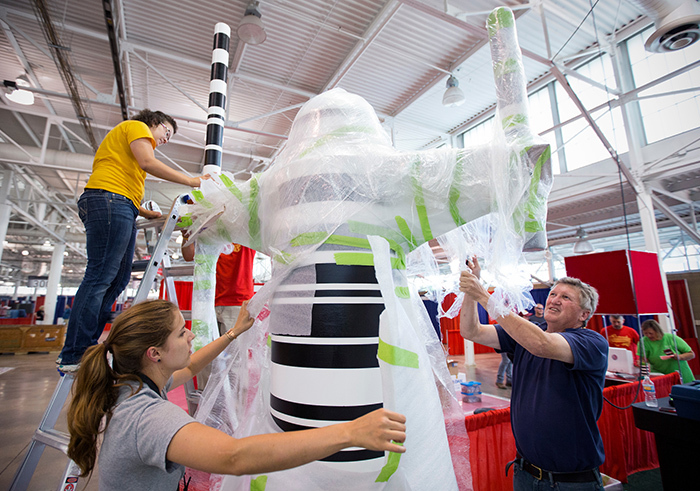 Clockwise from right, Tom Stancliffe, Abby Hedley and Marie Glaser of the public art incubator at the University of Northern Iowa unwrap a refabricated G-Nome earlier this week at Iowa State's exhibit space on the state fairgrounds. One of four produced in aluminum by Stancliffe's team, the G-Nome joins seven other campus works of art in "Your Beautiful Adventure," the university's state fair exhibit, Aug. 11-21.

With its mates, next month it will replace the original terra cotta G-Nomes created by Minneapolis artist Andrew Leicester but damaged by 24 years in the elements atop the Molecular Biology Building. Like the originals, two of the refabricated G-Nomes have a domed head and two have a cylindrical head. At 400 pounds each, the metal versions are roughly half the weight -- but the same 12-foot height -- of the original G-Nome sculptures.

No one knows the origin of the mistaken notion that free expression on campus was confined to a few designated free speech zones. Perhaps it started in 1986 when student leaders honored a longtime mathematics professor and civil liberties activist with a small stone wall and plaque near the Hub that read "Edward S. Allen Free Speech Platform."

The plaque and wall disappeared during the Hub renovation last summer. But the misleading phrase "free speech zone" had crept into university jargon, generally in reference to the Allen space and a couple of other spots on campus that were considered good rally spots.

That phrase led some to believe that any campus locale not designated as a "free speech" area was off limits to free expression.

That policy -- officially called the "Facilities and Grounds Use, Activities" policy -- applies to all kinds of gatherings on campus, from a lone speaker orating at the Hub to large public events involving stages and microphones.

The policy was revised over the spring and summer, and recently, was posted to the university policy library.

"The revised version doesn't change any of the rules," Rippke said. "But it's streamlined and easier to read. And it emphasizes that Iowa State, as part of its mission, encourages expressive activities throughout the university. It welcomes the university community and public to make use of university facilities and grounds, as long as activities are noncommercial and don't substantially interfere with university activities."

Members of the university community or public may express themselves at any unrestricted outdoor area on campus without giving notice as long as they meet a few conditions. For example, their activities must be noncommercial, occur between 8 a.m. and 10 p.m., be located 100 feet away from classroom buildings, and not interfere with walkways or building access. If the area hasn't been scheduled by another person or group, an individual can just walk up and start talking. (Outdoor restricted areas include such places as residences, farms, utility tunnels and facilities used for intercollegiate athletics or federal or national labs.)

Outside activities that organizers reasonably anticipate might draw more than 50 people or indoor events that draw more than 15 are considered public events. Organizations and groups must contact university offices (specified in the policy) to get approval for these activities.

Any use of indoor areas must not interfere with university programs and events. Activities also should be compatible with the purpose of the area or facility. (For example, requests to put a dunk tank in the foyer of a building or set up portable grill near a residence hall food court likely would not be approved.) Organizations and groups that wish to use university buildings for meetings, events and conferences must contact relevant offices (listed in the policy) to determine availability and usage fees. Some indoor areas aren’t available for nonuniversity-related assembly or solicitation. These include hallways, stairways, waiting rooms, residence and dining facilities, work rooms and health facilities.

The policy notes two areas on campus that are particularly conducive to public gatherings (centrally located, high traffic, won't interfere with building access) and refers to them with an ancient Greek word meaning gathering place -- "agora" (pronounced AG-or-uh). The popular areas are:

The policy also includes general rules about use of university property, displaying non-instructional materials and access to facilities.

Three finalists have been selected for project director of Hispanic/Latino affairs, a new post in the office of the vice president for diversity and inclusion, Reginald Stewart.  Interviews will take place on campus this month.

The project director will provide, develop and facilitate education, outreach and other support functions to students, faculty and staff, with an emphasis on the Hispanic, Latino, Latinx (pronounced La-TEEN-ex) and other targeted underrepresented populations.

The campus community is encouraged to attend an open forum with each candidate. (All forums are from 2 to 3 p.m.).

The candidates' vitas and an evaluation form are available on the vice president for diversity and inclusion website.

"We reviewed the market to see what other employers and universities were doing, and we found that many allowed for four or more sessions," said Ed Holland, director of benefits. "We requested additional market and cost information, and presented a proposal to the university benefits committee."

Iowa State's EAP, administered by Employee and Family Resources (EFR), is a free, confidential benefit available to employees and their family members to help with a variety of problems, from health concerns, to anxiety and depression, to legal and financial issues.

Licensed professional counselors work with individuals to determine how to resolve their situations.

EAP-eligible participants include benefits-eligible employees, family members living in their homes and legal dependents who may live elsewhere. Family members may contact the EAP on their own and receive the same confidential services. More information about these services is available online.

Holland said less than 3 percent of eligible ISU employees contacted the EAP last year. But the rate at which the EAP helped those employees was more impressive.

"The resolution rate our provider (EFR) reports during the initial three sessions was almost 42 percent.  With the expansion to six sessions, we believe problem resolution prior to referral will improve even more, encouraging employees to utilize this tremendous benefit." 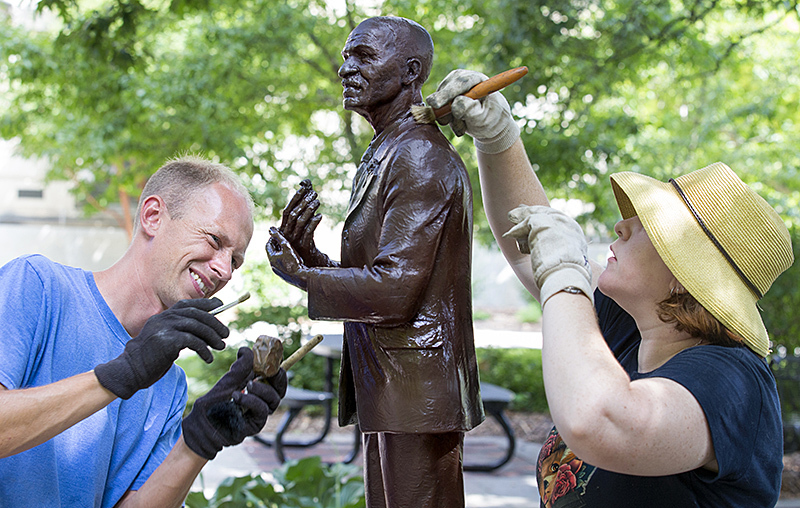 Conserve Art's Mike Donovan and university museums' Erin O'Malley work to apply a protective layer of wax to the sculpture that serves as the centerpiece of George Washington Carver Plaza. Photos by Christopher Gannon. 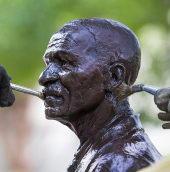 While a selection of works from university museums' Art on Campus collection are the focus of Iowa State's state fair exhibit, several more are getting some TLC in Ames. Representatives from Connecticut-based Conserve Art have visited campus over the summer months, tending to the regular maintenance and care of ISU's public art collection. This week, a bronze cast of Christian Petersen's George Washington Carver sculpture was among the items on the conservation to-do list. Other art works getting attention include the Jack Trice statue north of the football stadium and bas relief murals in the Food Sciences Building. The Fountain of the Four Seasons also will have conservation work done.