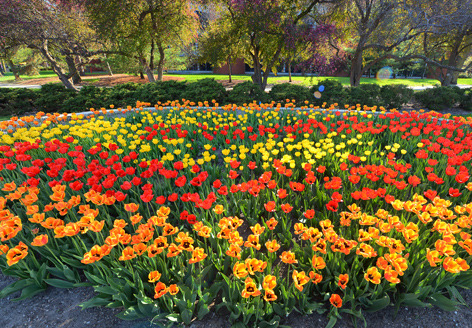 Early May typically makes for a colorful, photographable corner where Wallace and Osborn meet on the east side of campus. The agronomy department and Agronomy Club members maintain this large flower bed. Photo by Bob Elbert.

By Diana Pounds
May 15

When he announced his initiative for interdisciplinary research during his fall 2012 inauguration, President Steven Leath had three goals in mind:

Here are a few highlights of the teams' brief progress reports on the past year.

This worldwide initiative, centered at Iowa State, addresses the challenge of feeding a growing population. Scientists will tackle food security issues at every step in the food chain value chain. Research will focus on both plants and animals.  Eight land-grant universities, four international research institutes, many companies and the Heifer International charity are part of the consortium. A recent two-day symposium brought 185 speakers and attendees from all over the world to Ames.

This systems approach to vaccine design merges advances in nanotechnology and materials sciences with advances in immunology to create a new class of nanovaccines for humans. Led by ISU, the team includes six universities (four in the U.S., two international), several research and government labs and several companies. In one project, researchers hope to develop vaccines that can be kept at room temperature, which would be particularly beneficial in developing countries.

Thirty investigators from five scientific disciplines are taking a multistage approach to vaccine development. The initial focus will be on HIV, influenza and porcine reproductive and respiratory syndrome virus. As of January 2014, the team had secured $8 million in grants and contracts with $12 million pending.  It will hold an international symposium in Ames in June.

The team's vision is to bring together engineers and plants scientists to design and breed better crops that tolerate climate change, produce bigger yields and feed more people. A workshop in Des Moines in late April drew international experts as well as representatives from agribusiness companies and government agencies.

The language of writing in STEM disciplines

The project lays the groundwork for creating a national center of scholarship for the study of language in academic and professional writing in science, technology, engineering and mathematics (STEM) disciplines.  The cross-disciplinary team has applied for two National Science Foundation proposals, the first-ever NSF grants submitted by ISU linguistics.

The team's long-term goal is to establish Iowa State as a leader in developing novel RNA-based therapeutic approaches to treat infectious diseases. Researchers will combine new biophysical and data-driven computational approaches to overcome some of the difficulties involved in determining the structure of RNA-protein complexes.

Through the initiative, the first four teams (above) collectively will receive up to $4.5 million over three years to pursue competitive grants to fund large-scale, multidisciplinary research efforts.

The remaining three teams each received up to $100,000 to pursue funds in emerging areas.

Members of the Professional and Scientific Council heard from Stephanie Downs at their May 8 meeting. Downs was hired as ISU's first wellness coordinator this spring and told the council she is on a "discovery tour" of the university during her first few months.

"What I'm hoping to do now is to get out and meet as many people, departments and services as I can. To really find out what you want, what you're looking for -- what is the culture, what's happing, what are some of your wants and some of your wishes," Downs said.

She plans to develop a three- to five-year plan in late July and August.

"I use 'wellbeing' instead of 'wellness,'" Downs said. "Most people end up with the jogging and broccoli concept. What I want to do is start to think about wellbeing -- as far as a well organization and engaged employees -- and move it to a bigger picture. You can program, program, program, but if your culture isn't supporting it, no one can go to your programs anyway and people can't embrace that."

"This is the framework I want to set, to have the conversations to learn more about what you want," Downs said.

Fifteen council members who won their seats in the general elections were introduced. They begin their terms in June. Council members also elected their 2014-15 officers: 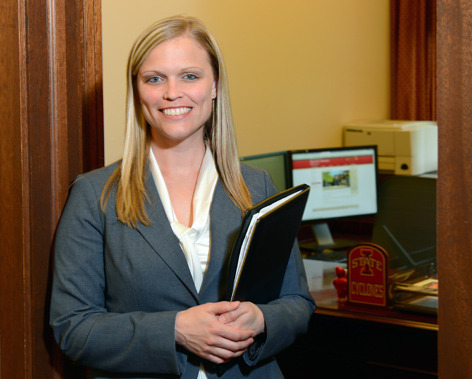 Megan Landolt has been serving as assistant for communications to President Steven Leath since April 21. Her responsibilities include speech writing, preparing press statements and letters, and developing other correspondence and communications for the president.

Landolt comes to Iowa State from KCCI-TV, Des Moines, where she worked for 10 years as a producer. She is an Iowa State alumna; her degree is in journalism and mass communication.

Landolt's office is in 1750 Beardshear. Contact her by phone at 294-1508, and by email at mlandolt@iastate.edu. Photo by Bob Elbert. 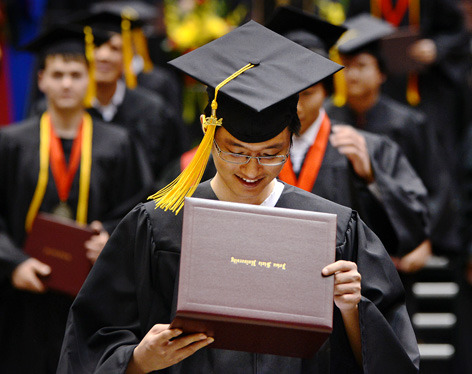 Undergraduates from the College of Liberal Arts and Sciences return to their seats after crossing the stage to receive congratulations from President Steven Leath or Provost Jonathan Wickert during the Saturday afternoon commencement ceremony at Hilton Coliseum. One new alumnus couldn't help but take a peek at what was inside. Photo by Amy Vinchattle.

Alumni, by the numbers

By Diana Pounds
May 15

They're the largest college or university alumni group in Iowa. They live in all 99 Iowa counties, all 50 states and 115 countries. Here's a quick numerical glance at the people who call Iowa State their alma mater.

Longtime alums are back

Alumni celebrating their 50-year reunion and "upperclassmen" who've passed that milestone are on campus today and tomorrow for Alumni Days. Some 70 alumni from the class of 1964 and another 200 visitors, including alums from earlier classes and spouses, are back.

They have a full class load over the next few days. Events include college receptions; tours of the Campanile, State Gym and campus art; and the traditional banquet at which 50-year alums receive medallions.

Special Olympics Iowa is hosting a community picnic on Friday, May 23, to celebrate the summer games' 30th year at Iowa State.

The Special Olympics Iowa Summer Games return to the Iowa State campus May 22-24, marking the event's 30th year in Ames. More than 2,700 athletes will participate in bocce, cycling, developmental sports, soccer, tennis, swimming and track and field events. An estimated 3,000 volunteers -- including coaches and chaperones -- also will take part in the event.

Access to some roads and parking lots will be limited or closed, including:

While Iowa State student numbers drop noticeably in the summer, our campus visitors data spikes. Here's a quick rundown of some of the larger groups heading our way -- and when.

If you have a large group (100+) coming to campus this summer, send a note to inside@iastate.edu and we'll add it to the list.

Here's a first look at who's coming to campus this summer -- and when.