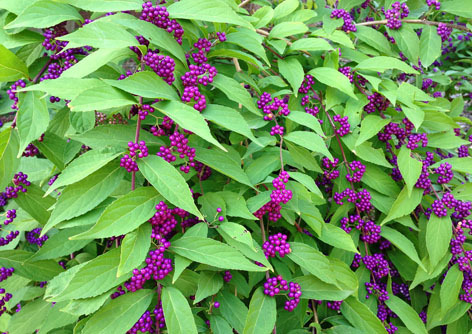 As the leaves turn red and yellow this fall, a rare glimpse of purple can be found northeast of Sweeney Hall. Beautyberry shrubs (Callicarpa dichotoma "Issai") are found primarily in southern states. Only six are listed on facilities planning and management's campus plant inventory, and are used as teaching plants. According to the USDA's Natural Resources Conservation Service, the shrub can grow up to eight feet tall (three to four feet in the north). The purple berries are attractive to birds and animals, and early farmers used crushed leaves as bug repellant for them and their livestock. Photo by Rhonda Martin, FPM landscape architect.

By Rob Schweers, Office of the Senior Vice President and Provost
October 24

Twenty-nine new faculty positions have been approved in the first year of funding for a presidential initiative to hire faculty in targeted areas.

The initiative will be funded with $1.5 million in new state appropriations and $500,000 gained from efficiencies within the academic affairs division. Hiring units will provide matching funds.

The new faculty posts include 20 interdisciplinary positions in the areas of big data and translational health, and positions that expand capabilities in areas like communication, policy analysis and real estate economics, or address Iowa State's record enrollment.

"I am excited to see how faculty are planning to work across colleges, and across departments, to expand our capabilities in areas important to Iowa's future," Leath said. "If we combine this initiative with the 85 faculty we already were planning to recruit this year, that means we're looking for more than 100 outstanding faculty to join Iowa State."

Senior vice president and provost Jonathan Wickert praised the colleges and units for the quality and collaboration of the hiring proposals.

"The $2 million central investment will be matched dollar-for-dollar by the academic colleges and extension and outreach," Wickert said. "The growth in the tenure-track and tenured faculty ranks resulting from this initiative will make a real difference."

The 29 high-impact hires are listed below. Visit the provost's website for a full listing of this year's open faculty positions.

A new way to distribute the dollars

A task force asked to review how the state's General University appropriation is allocated each year to the three regent universities began its work last week and hopes to present recommendations to the state Board of Regents in June. It's unlikely that the recommendations would be applied to next summer's state appropriation.

Art Hauptman, a Virginia-based public policy consultant who specializes in the financing of higher education, led the task force's first discussion. Hauptman told the group that "it's very important to have a formula, some mechanism, for taking a politically derived number and allocating it. A formula sends messages to the institutions on where/how to spend the money.

"In Iowa, you've been sort of on auto pilot in that sense," he said.

About half of state legislatures reward their public universities for good performance, most commonly based on graduation rates, Hauptman said. Noting that graduation rates can be manipulated with selective admission practices, he encouraged the task force to consider graduation numbers as a better marker. Within that might be sub groups, such as low-income graduates, minority graduates or graduates with specific skills.

Board of regents staff member Patrice Sayre showed task force members that little has changed in how state funds are allocated since 1946, the earliest year for which she could find records. Since post-World War II, the three regent universities have received general instructional funding in roughly a 40-40-20 split (University of Iowa-Iowa State University-University of Northern Iowa).

Sayre said there aren't guidelines in either the Iowa Code or the board's policy manual on allocating state appropriations among the three schools.

In the 1960s and 1970s, some states began basing at least part of their appropriations on student enrollment, but Iowa has never done that, she said.

Former regent David Miles chairs the five-member task force. He's joined by current regent Katie Mulholland and an appointee from each of the schools:

When former board of regents president Craig Lang announced the task force last April, he asked it to look at the current formula for distributing General University appropriations and find "an agreed-upon set of measurements that may help rebalance the equation and link dollars more directly to priorities."

The task force's work this winter will include discussions with the three university presidents, a higher education leader from a state that uses performance-based funding and staff with the Education Advisory Board, a provider of research outcomes and practical advice in higher education. During April and May, the group hopes to focus on a metrics set and develop its recommendations.

At Iowa State this fiscal year, the General University allocation is about $174 million, or roughly 28 percent of the operating budget. It does not include about $55 million in state funds appropriated directly to ISU units such as the Ag Experiment Station, Cooperative Extension, Veterinary Diagnostic Laboratory and the ISU Research Park.

Faculty, professional and scientific staff and supervisory merit employees have an opportunity to review and change their ISU Plan benefits during the annual open change period, Nov. 1-22.

Rates for Avesis vision coverage also are increasing slightly. The 2014 monthly costs are:

There are no plan changes or cost increases for the basic and comprehensive dental plans.

Employees may continue to insure children up to age 26 on their medical, dental and Avesis vision plans for 2014. To qualify, children must be under age 26 on Jan. 1, 2014. Children may be covered even if they are married or have a job with health care benefits. If children already have benefits, the ISU coverage would supplement their primary health plans.

If children turn 26 in 2014, coverage must end Dec. 31, 2014. However, if children are unmarried and enroll as full-time students during the year, they can remain on their parents' ISU health or dental plans until they either get married or stop being full-time students. There may be tax implications for employees who insure students over age 26.

Nonsupervisory merit employees may review and alter their benefits through 5 p.m. Nov. 19.

How to change your benefits

ISU Plan participants may update their medical, dental, flexible spending and Avesis coverage online through AccessPlus. Some changes may require paper forms, which are available on the benefits website or from university human resources (UHR). If you are making no changes, there's no need to update your benefits; your current choices will carry over to 2014. However, the UHR staff asks that you look through your benefits statements to confirm your dependents' information.

UHR is hosting an interactive webcast for ISU Plan participants on Nov. 11 from 10:15 a.m. to 11:15 a.m. To participate, log on to https://connect.extension.iastate.edu/benefits. At the login page, enter your name under the "Enter as a Guest" heading, then click "Enter Room."

University human resources (UHR) prompted the change to efficiently manage the use of temporary staff. As a result of new language in the collective bargaining agreement between AFSCME and the state of Iowa as well as compliance with the Regents Merit System Rules, only temporary employees hired for positions covered by the AFSCME collective bargaining agreement are impacted by this change.

Employees designated as non-AFSCME, including P&S temporary, supervisory or confidential merit, seasonal, or employees classified as helpers or clerical helpers, are not affected. For those employees and for student workers, supervisors should continue to contact UHR.

UHR has created a detailed FAQ (PDF) for ISU supervisors on its website, which covers everything from parking passes to payroll. In addition, the site contains a price guide (PDF) for each position as well as a temporary employee request form (PDF). For additional information, supervisors should contact UHR at 4-3753, your college or unit's human resources liaison or Michele Morales, 233-4333, at Advance Services Inc.

*Designation for which a degree isn't awarded

Source: Office of the Registrar 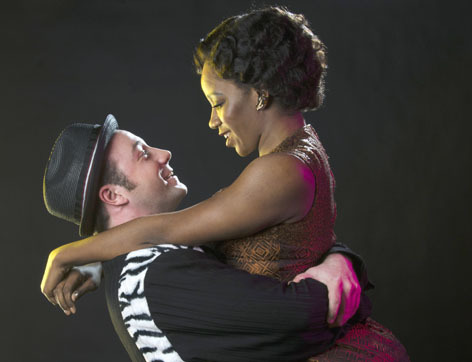 The Tony Award-winning, rock-and-roll Broadway musical Memphis brings high-energy dancing, powerful songs and a tale of forbidden love to Stephens Auditorium Oct. 24 (7:30 p.m.). Vist the underground dance clubs of the 1950s to follow the story of a black singer and a white radio DJ with careers on the rise, inspired by real events. Tickets are $46-$50 ($25 for ISU students, $28 for youth), available at the Stephens ticket office or through Ticketmaster. Tickets include admission to a Celebrity Café presentation by John Pemble, arts and culture reporter for Iowa Public Radio. Guests also may purchase a preshow barbecue dinner ($15) at Stephens' Celebrity Café, catered by Hickory Park. Submitted photo.

Follow a story of fame and forbidden love in the Tony Award-winning Broadway musical Memphis.