Deferred maintenance is a mounting concern 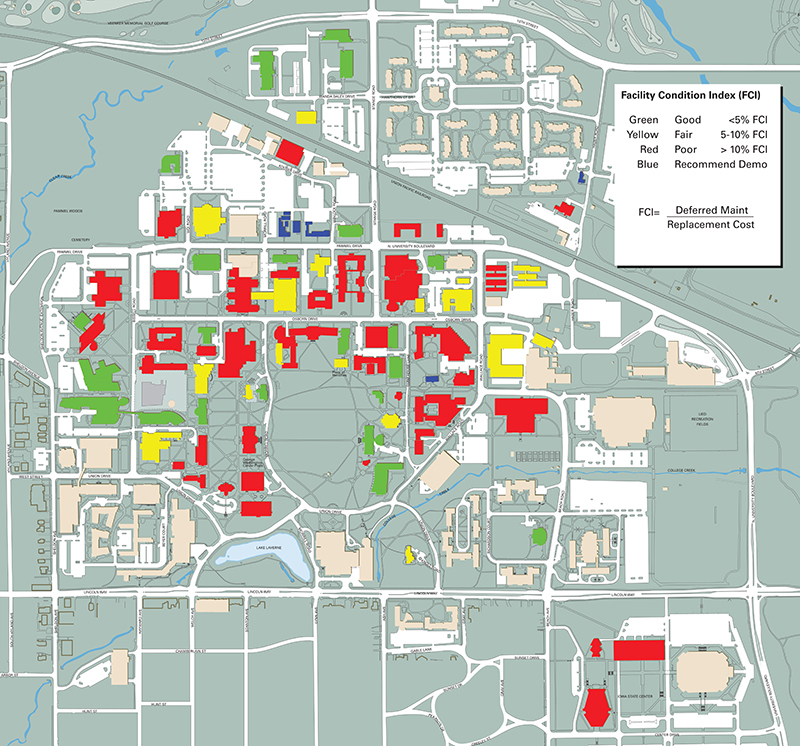 This facility condition index map shows how much deferred maintenance is estimated in general education buildings relative to their replacement value. Courtesy of facilities planning and management.

That staggering estimate is the result of years of underfunding both typical upkeep and recurring replacements and repairs, Fuligni said as he presented a report on deferred maintenance titled "State of Elegant Decline."

Cost of keeping up

That's not likely to change, Fuligni said. It would cost an estimated $42 million per year to stabilize the condition of Iowa State's 7.3 million square feet of general fund facilities, which doesn't include self-supporting units such as the athletics and residence departments, according to the report. To trim the deferred maintenance bill in half over 10 years would take an additional $23 million per year.

"That's a lot of money. The university can't afford it, nor could we get access to enough buildings every year to do that kind of work," Fuligni said.

In FY18, FPM spent about $12.3 million on maintenance and repairs. It plans to spend about $16.3 million in FY19. Iowa State would need to spend about $25.2 million per year to match the average for research universities, according to data from APPA, a professional association for higher-education facilities managers.

"I don't recommend doing that all at once, but it's just something to think about as the university revisits its budget process and thinks about allocations," Fuligni said. "We're relying on this old infrastructure to do what we do every day."

Other state Board of Regents institutions also face climbing deferred maintenance needs, with the backlog for campus buildings and utilities across the system doubling in the last decade. The total outstanding building maintenance at regents institutions was $772.3 million as of this fall, according to a report presented to the board this week. APPA data shows Iowa State's 2018 backlog, at $60 per square foot, is lower than the $66 per square foot average for a research university as of 2017.

The university's maintenance and improvement committee helps prioritize limited repair funds, triaging long-standing and pressing needs like the work being done now on the Beardshear Hall air-handling unit -- a project that's replacing a 110-year paddlewheel that exceeded its expected lifespan by 70 years.

But those choices are difficult because of the length of the to-do list. More than 40 campus buildings have deferred maintenance that would cost more than 10 percent of the price of replacing the building. Gilman Hall has the biggest backlog, at $28.2 million, according to the report. It also was tops in service calls in FY18, with 315.

Despite the daunting accumulation of work to be done someday, Fuligni said FPM staff don't ignore fire protection or other life-safety concerns. And he urged P&S Council members to continue reporting maintenance issues, even if they're not fixed immediately.

"We'll get there eventually," he said. "Please don't give up on us."

The FPM report detailed the FY18 deferred maintenance estimates and service calls at a dozen academic buildings most in need of repairs:

President Stacy Renfro shared a list of personnel data the council's executive committee is asking university human resources to provide on an annual basis to assist in council decision-making. The data includes information on turnover (such as reasons for leaving and time taken to fill the position), at-will employment and performance evaluation completion rates by unit.

Nearly 60 faculty and staff will be honored at a Sept. 14 university awards ceremony.