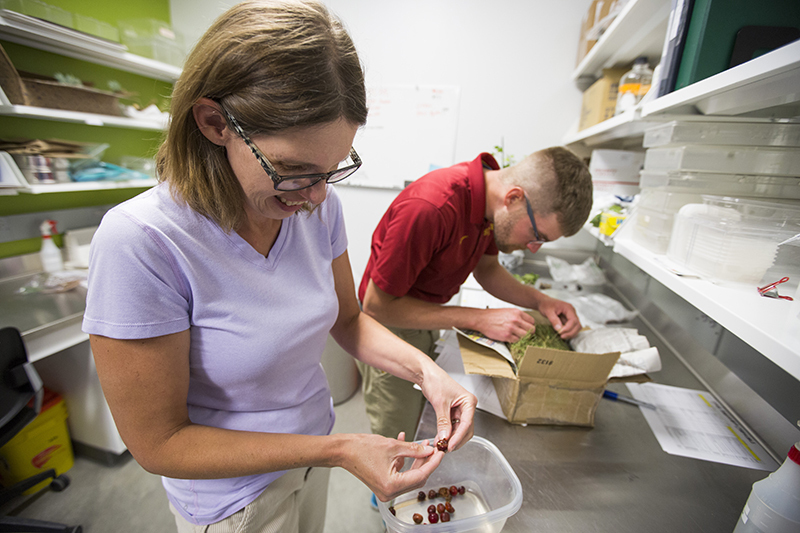 Laura Iles, left, and Ed Zaworski examine plant samples in the intake area of the Plant and Insect Diagnostic Clinic in the Advanced Teaching and Research Building. Photos by Christopher Gannon.

Yes, Laura Iles' team of diagnosticians at the Plant and Insect Diagnostic Clinic spend the bulk of their time studying nonhuman problems. But their jobs really are about helping people, said Iles, the clinic's director.

Their clientele are growers, crop scouts, landscapers, gardeners, county extension agents, homeowners -- any Iowan with a plant disease or pest concern. The clinic's recommendations for managing plant pathogens and unwanted insects are typically focused on prevention, which can require some garden bedside manner in cases of ailing specimens with special significance -- a tree planted as a memorial for a loved one, for instance.

"That's a hard conversation to have. People really have an emotional connection to the plants in their yards," Iles said. "And then, of course, the farmers have a lot of money on the line."

With the clinic's move in May to its new home in the Advanced Teaching and Research Building, those occasionally difficult discussions haven't gotten any easier. But day-to-day operations in the clinic are much improved, as is its public accessibility. Clients dropping off samples can drive directly to the building. Previously, the clinic was in Bessey Hall. 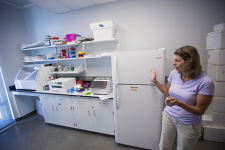 Director Laura Iles inside a lab room at the Plant and Insect Diagnostic Clinic.

"Now they don't have to talk themselves through the Osborn Drive gate," Iles said.

Inside the new, larger space are separate rooms for receiving and examining samples, growing bacterial cultures and conducting tests. Isolating "dirty" and "clean" rooms was an important upgrade from the prior single-room setup, especially for a lab geared toward public interaction, Iles said.

The new facility opens as the clinic's caseload is on the rise. Last year, it processed nearly 2,600 samples, the most in about 15 years. Three diagnosticians -- including Iles, an entomologist -- are assisted by a handful of undergraduates in detecting and suggesting treatment and management options for diseases and insects that damage plants. They also survey crop and turfgrass soil samples for nematodes (roundworms) and identify unknown plants, insects and mushrooms.

"A tomato is lovely because we can get the whole sample," Iles said while pointing to a recently received tomato plant that included the root ball and surrounding soil. "When people have a dying tree, they can't send us the whole tree."The first step upon receiving a sample is triage. While the clinic aims for a turnaround time of less than two weeks, urgent requests move to the front of the line. That includes immediate health concerns, such as possible bedbugs or a tick found embedded in skin, Iles said. Submissions are documented thoroughly, including any observations or photos provided by the client. Anything could end up being a clue. 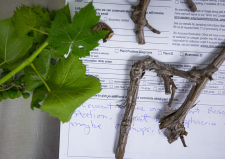 A submission to the Plant and Insect Diagnostic Clinic.

The issues the team deals with vary wildly. In 2017, 49 percent of diagnoses were plant disease, 29 percent were insect damage, 13 percent were environmental factors and 9 percent were identifications. Sometimes they can spot the problem from a photo. Or they may need to make bacterial cultures and run DNA tests. Often, they consult with Iowa State faculty with specific expertise. Once in a while, they get stumped.

"I always joke plants can't talk. We don't have a blood test for plants. That 'don't know' happens a lot," Iles said. "People envision we're like 'CSI' and can do a DNA test over the commercial break."

The clinic was established in the 1950s in response to Dutch elm disease, using faculty and graduate students to handle cases before the first full-time staffer was hired in 1989. Some diseases are constants -- Rhizosphaera needle cast on spruce trees, for instance -- but every year can bring new challenges, said Ed Zaworski, one of the clinic's two plant pathology diagnosticians, along with Lina Rodriguez-Salamanca.

In 2016, the emerging threat was bacterial leaf streak on corn, one of Zaworski's favorite set of cases he's worked on at the clinic. The disease was new to Iowa and could be confused with some lookalikes, he said. The clinic identified 336 instances of it that year.

"We were at that forefront of processing samples for the state," Zaworski said. "It was important."

Simply relaying common tips can be satisfying, too. Iles said learning straightforward facts about the bugs seeking refuge in their homes often settles down concerned homeowners.

"Those are the best days because people are so nice and so happy to have basic information. People don't know that much about insects, and it can be very upsetting," she said.

Iowa State units are hosting public activities and events as part of RAGBRAI's stop in Ames.