'This could be you': ISU faculty, staff of color help Ames students harness passions 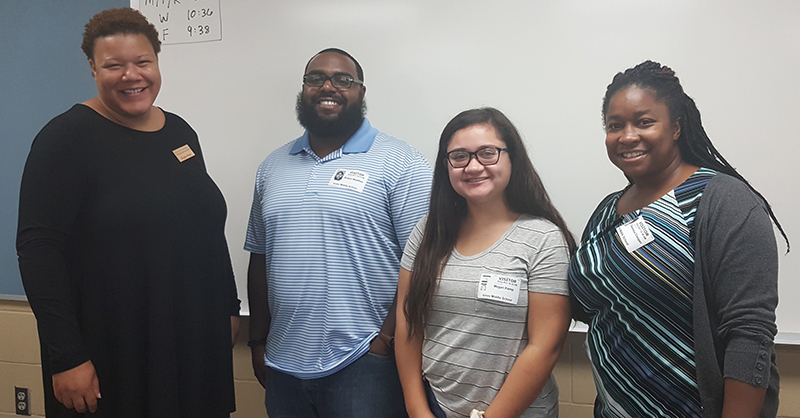 To help students of color -- including her own kids -- grasp the challenges they face in a largely white school, Angela Shaw describes it with bikes. It's like plodding down the road on a winter bike with thick grippy tires, riding alongside white friends with sleek, thin-wheeled racing bikes. Everybody's heading in the same direction, but they need to pedal harder. As an African-American woman on faculty at a predominantly white university, Shaw feels that, too.

"The difference between my child and me is I've learned strategies to cope," said Shaw, an associate professor of food science and human nutrition. "These kids need strategies. By the time they get to me, they've been beat up since preschool. And they haven't understood why they feel beat up."

With volunteer help from dozens of Iowa State faculty and staff of color, a new program called Passion Academy founded by Shaw provided those strategies throughout the school year to more than 50 Hispanic and black students in the sixth and seventh grades at Ames Middle School. While guiding students on how to navigate white spaces, Passion Academy encourages them to think of their interests as the launchpad for their education and career.

In weekly lunchtime sessions from September through April, Iowa State employees volunteered to talk to students about their career journeys and lead presentations on skills essential to success in the classroom and the workplace. More than 40 black and Hispanic faculty and staff from 18 units and departments participated, including extension specialists, hall directors, professors, program staff, scientists, librarians and top administrators.

"We brought people in so they could see: 'This could be you,'" Shaw said.

One of the volunteers was Connie Hargrave, an associate professor in the School of Education and former director of Iowa State's Science Bound program. She said middle school is an ideal age to urge students to recognize their potential and how to achieve it.

Sessions on skill development covered concepts ranging from making eye contact, shaking hands and speaking up, to identifying preferred learning styles, managing time and dealing with difficult people. Volunteers who returned in the spring were impressed by the progress students made, as were their teachers, Shaw said.

"Teachers have noticed differences in our students -- how they behave, how they talk, how they react. We're teaching them, 'Yeah, the teacher's giving you attitude, but it's how you respond,'" she said. "Make that teacher take responsibility for you. Ask more questions. Ask for help."

Shaw, a food safety expert, was driven to create Passion Academy, which debuted last fall after a shorter pilot program last spring, in part to create a more robust pool of potential faculty. Diversity in hiring is difficult in food science and food safety, as it is in many academic disciplines, she said.

By the end of the year, students' career goals were far more varied than at the outset, Shaw said. Mechanical engineer. Ag biosystems engineer. Therapist. Chemists who want to create cosmetics and coders who want to build video games. One was even interested in food safety.

"We just really want to empower the next generation so we can get them here," she said.

Helping address the achievement gap for students of color in Ames schools was also a chief motivation for founding Passion Academy. Shaw said programs to help support minority K-12 students often don't focus on predominantly white districts. That students of color still lag behind academically in Ames, a resource-rich university town, speaks to the potency of the systemic failures in education, Hargrave said.

Though it needs better financial support, after getting by its first year on a $500 grant from the office of diversity and inclusion and Shaw's incentive fund, the program will continue next year with some adaptations, she said. This year's seventh graders have the opportunity to move on to a district college-prep program called CONNECT. A similar Passion Academy curriculum to this year's will be provided for incoming sixth graders, though Shaw may expand the volunteer base to include trade professions that don't require a four-year degree.

But for this next fall's incoming seventh graders who already have been through one year of the program, Shaw plans to develop new lessons focused on research and learning that connects to students' individual career goals.

Hargrave said creative development in areas that interest them will help students realize they have value and can contribute now. It also emphasizes the benefits and joys of striving for what you want, she said.

Thousands of campus visitors for the Special Olympics Iowa summer games May 17-18 will close lots, roads.