The Professional and Scientific Council added a third category to its CYtation awards list, this one created to honor long-time council member and ISU employee Dan Woodin, who died last year.

Lindsey Wanderscheid, chair of the council's awards committee, said development of the award began soon after the council passed a memorial resolution to recognize Woodin's service, including four terms as president.

"It's amazing how much he did for P&S Council," Wanderscheid said.

The committee developed the criteria and initiated the process to establish the award. The group met with Woodin's family, who endorsed the award, and partnered with the athletics department to provide a pair of skybox tickets to the 2015 football home opener.

One Woodin CYtation Award will be presented this spring to a P&S employee who:

Nominations for all three P&S CYtation categories -- individual, team and Woodin awards -- are due Dec. 1. Information about the awards, including criteria and nomination forms, is available on the P&S Council website. Recipients will be recognized at an awards banquet in spring 2015. 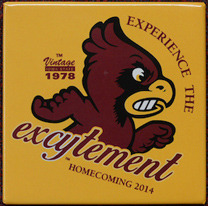