Summer school takes on many shapes 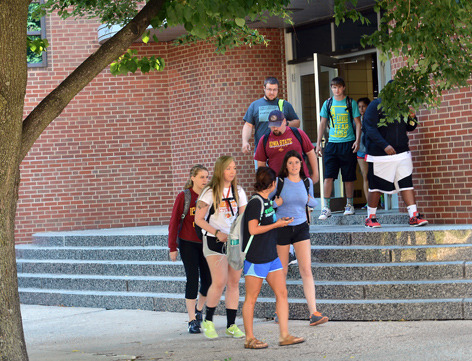 Summer session students have been hard at it for nearly six weeks now, so it may be a bit of a surprise that Iowa State will take its official count on Friday. As it turns out, June 27 is the 10th day of the second summer session. From mid-May through early August, Iowa State offers two 8-week sessions, a "full" 12-week session and lots of other, shorter options for earning course credits – close to 30 in all, according to assistant registrar Shawna Saad.

Depending on the length of the class period and the credits earned, classes also might meet for a day, two days, two weeks, four weeks or something in between. Departments set the start and end dates; it's up to the registrar's office and, if appropriate, the room scheduling team, to make it happen. What's consistent is the hours-credit ratio – roughly 13 hours per credit.

"Flexibility is really important in the summer for students," Saad said. "They go home for all or part of it, they have internships and co-ops. Some of them are studying abroad. So I think our colleges are trying to make it easier for students to pick up a few credits in the summer – even with other things going on."

If this summer is like past summers, student enrollment will be roughly a third of fall and spring enrollments. And, if it's like last summer, on-campus students who enroll in distance education or online course sections will outnumber their place-bound classmates.

Ruth MacDonald, chair of the food science and human nutrition department, said her department's summer courses all are offered online, with the exception of an introductory course that has both an online and campus offering.

"The decisions about what courses to offer in the summer are strictly based on student demand," she said. "We provide summer online options for students who cannot fit them into their schedules [in the fall or spring] or who would like to have a summer option."

Psychology professor and associate chair Veronica Dark said summer enrollments are a numbers game, but she's learned which courses will fill – and then they experiment with a few other offerings. There are a few patterns the department tries to accommodate, such as seniors who missed May graduation by a few credits and need an upper division course to finish by August, or the introductory course that fills with current underclassmen during the first session but May high school graduates during the second session.

Dark said her department also uses the summer sessions to give needed teaching experience to graduate students who completed a master's degree and a 600-level teaching course and will seek academic positions down the road.

Chemistry chair William Jenks said his department's summer offerings have been stable for several years, though sections have been added as enrollment climbed. He said his department loads up the first eight-week session – eight weeks because "we think chemistry is hard enough that the eight-week summer session is as quick as we'd want to work through an introductory chemistry course" and first session because "we perceive that both faculty and students (on average) are more available in the early summer than later in the summer."

For planning and predictability, he said the department tries to be consistent from year to year about when summer courses will be offered.