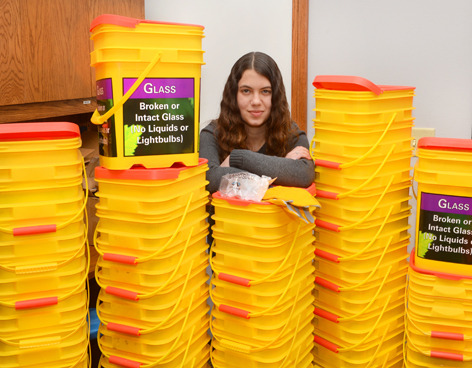 Aware that the City of Ames wants glass removed from its waste stream (it damages and limits the lifespan of machinery at the Resource Recovery Plant), Romano, who is a student liaison for the Department of Residence Green Team, spearheaded a new glass recycling program for on-campus residence halls using the cat litter bins.

"I thought adding glass recycling to the pre-existing paper, wet board, plastics and redeemables recycling would be a good project," Romano said. "They already use the Tidy Cats bins for glass recycling in the labs across campus so I thought it would be simple enough to translate that effort to the residence halls."

She pitched the idea to the GreenHouse Group's sustainability coordinators, who in turn, presented the initiative to their respective residence hall councils. All agreed the idea should move forward.

So far this spring, approximately 90 of the 35-pound bins have been placed in residence halls, including:

Romano said additional bins would be placed in Maple, Willow, Buchanan, Wallace and Wilson halls by fall semester. The bins are located with the halls' other recycling receptacles, usually in dens or restrooms. All glass, broken or intact, may be placed in the bins; light bulbs and sharps (needles, syringes, etc.) are not allowed.

The cost of the Tidy Cats bins was free, thanks to donations from cat owners and other green enthusiasts. The City of Ames also donated the outdoor recycling receptacles. The sturdy vinyl labels affixed to each bin cost about $600, which was funded by the residence department. Other incidental costs amounted to about $50.

How you can help

If you'd like to donate yellow, 35-pound Tidy Cats bins for campus recycling, drop them off -- clean with lids intact -- at director of sustainability Merry Rankin's office, 108 General Services Building, or at the front desk of the Environmental Health and Safety Services Building.