Some changes are coming to ISU budget model

Following his review of a May report (PDF) by a task force asked to analyze the effectiveness of Iowa State's now 5-year-old budget model, president Steven Leath has decided Iowa State will continue to use the model. He will, however, implement changes – some recommended by the task force, some he has identified – aimed at making the model work more effectively and efficiently for this university.

Leath said he intends to name soon a small group that will develop an implementation plan for those changes.

Iowa State first used the Resource Management Model to build budgets for the fiscal year that ended June 30, 2009. The model is designed to link resources with responsibilities, offer better flexibility as priorities evolve, and build in incentives to support university goals and strategies.

The University Budget Advisory Committee (UBAC) will be noticeably smaller, reduced from 18 designees and seven ex-officio members to nine designees and Lackey. Biedenbach also will assist UBAC. The Faculty Senate, Professional and Scientific Council, Graduate and Professional and Student Senate, and Government of the Student Body each will retain a representative on UBAC. Slots for the divisions of both student affairs and business and finance are upgraded from their former ex-officio status. The academic affairs division will have three representatives, one each of whom should have expertise in extension/outreach and research/economic development. Leath will chair both the president's budget cabinet and UBAC.

Leath directed that the other five advisory committees within the budget planning structure be discontinued. Library dean Olivia Madison, chief information officer Jim Davis and associate provost for academic programs David Holger should continue to solicit advice from key stakeholders on the best ways to serve the campus, Leath said.

"I believe there is value in gathering input from the campus on matters pertaining to budgets, but I don't believe the current structure is the most effective means of accomplishing this," he wrote in a memo to Hill, Madden and Wickert last week.

One of the recommendations in the review committee's report was a revision of the advisory committee structure. The report noted that some of the committees' size curtailed effective discussion and that the emphasis was on broad representation rather than on tapping individuals who could offer the most useful or timely insight.

Leath directed his senior vice presidents to develop another appropriate mechanism for "collecting broad-based input and advice about [your] division's budget planning and resource allocation decisions," beginning this fall with the FY14 planning process. They have a Sept. 10 deadline to propose a new structure for accomplishing that and an Oct. 15 target to implement it. 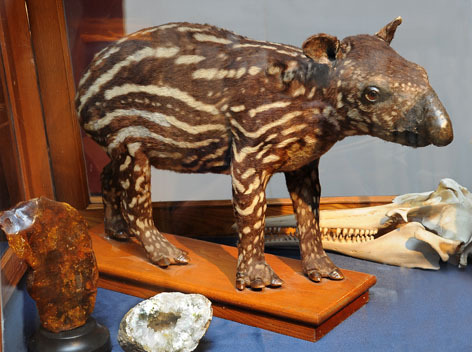 A collection of unique objects acquired from many parts of campus are featured in University Museum's "Cabinet of Curiosities" exhibit that opens Aug. 20.