How the iconic alumni calendar comes together 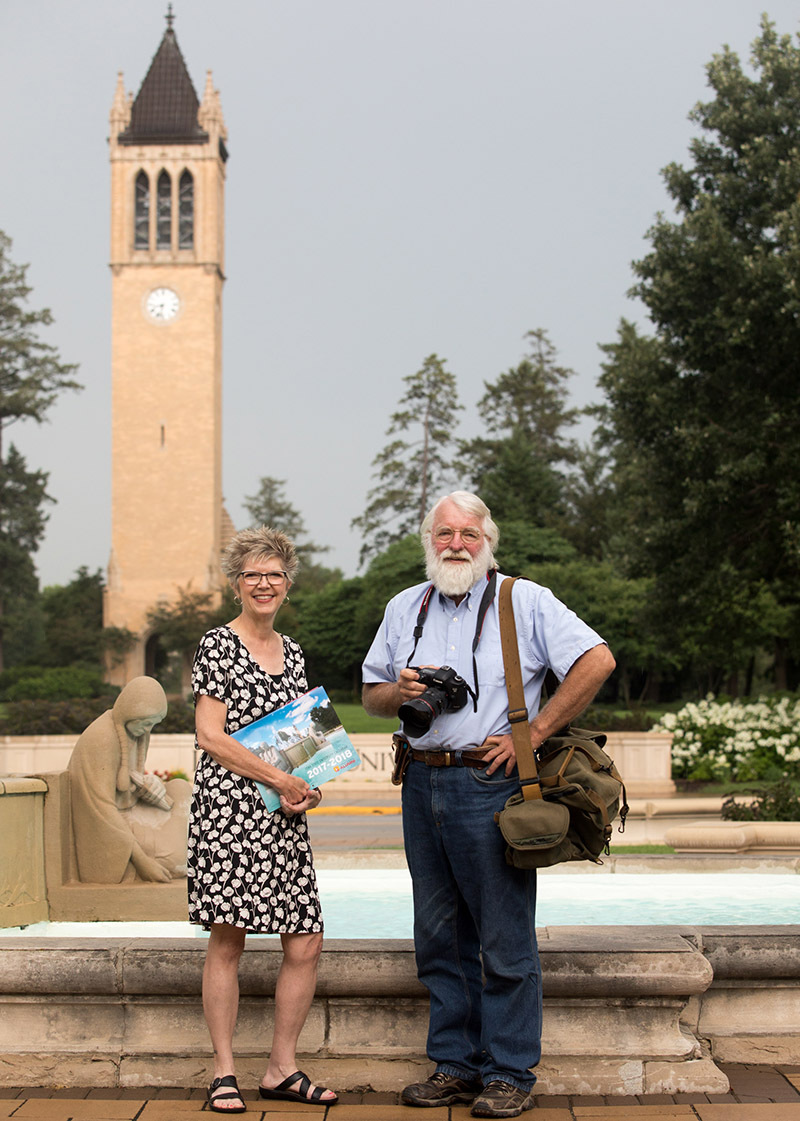 As a freelance photographer, Jim Heemstra's business travel often takes him across the country. When on assignment in a college town, he likes to walk the campus, asking himself about each school's buildings and grounds: Where are the 13 photos?

That's how many Heemstra photographs are published each year (one per month, plus one on the cover) in the alumni association's August-to-July calendar, a freebie for members and an annual showcase for the university's stately scenery. The Des Moines photographer has shot for the calendar since 1992.

In all those years, he said, finding new angles on Iowa State's most iconic buildings and spaces has never become tedious. But at nearly every other school he's visited, he can't imagine finding a year's worth of calendar-worthy beauty, let alone 13 every year for a generation.

"The campus is beautiful. It was beautiful when they were here, and it's beautiful now," said Gieseke, the calendar's editor.

But even university employees who work on campus every day appreciate a reminder. Of the roughly 38,000 calendars printed each year, 35,000 are sent to member households. More than half of the remaining sales are to campus units (1,560 in 2018-19), which could make the calendar the most common item on the wall of any given Iowa State office. Here's how it comes together.

The calendar is a 12-month project, as Heemstra shoots all year to ensure the scenes match the seasons. Sometimes the calendar follows a theme, like this year's then-and-now motif that includes an inset historical photo of each month's building or landmark. That requires some summertime planning on what to feature.

Otherwise, Heemstra takes a spontaneous approach to finding fitting photos. He tends to shoot much of his calendar work on meandering walks, especially in the fall and spring when colors are at their peak and the air is crisp. He used to jot down photo ideas in a notebook, but he's been doing it long enough that he doesn't need to anymore.

"It's a chance-favors-the-prepared-mind kind of thing. If I get too calculating, the pictures get stale," he said.

Less randomly, he does watch weather forecasts and satellite imagery, with a close eye on conditions that may create remarkable cloud formations or sunrises. Given the generally east-sloping contour of campus, its sunrises are much more impressive than its sunsets, he said.

"You have to have sky and light. They have to excite me. The buildings are almost kind of secondary. My main concern is the light and the sky and the composition," he said.

His least favorite time to shoot is midsummer, when humidity makes the air milky and the grass can get brown. Winter can be high stakes, as only wet snows with little wind are visually optimal. Depending on the year, there may only be a couple storms that qualify, Heemstra said.

Because the sunrises are better than sunsets, and most of the photos don't have people in them by design, he'll often visit campus at dawn on Sundays.

"It always reminds me of being in a really cool park," he said. "It's a morning campus."

By the time he turns in his discs of images each spring, Heemstra has captured several thousand photos -- 8,472 for a recent calendar, to be exact. He submits the full set to Gieseke, with several hundred marked as his favorites. She trims those down to the 13 that grace the walls of homes and offices for the next year.

Seasonality is a top consideration. September and October show fall colors. December can go the holiday route or be wintery. Snow or ice is a must in January and February. April and May need brilliant spring hues. June, July and August are full-bloom summer. March and November are the in-between months, a flexibility that allows for a new piece of art or a spectacular sky.

Setting is equally important. Gieseke tries to rotate what locations are featured, looking back over the last five years or so to jog her memory. She wants familiar buildings and places in photos that don't feel familiar. There are some constants. Nearly every calendar includes the Memorial Union. The campanile and Lake LaVerne, usually with swans, are every-year inclusions. The campanile is especially mandatory.

"There was one year we didn't have one, and boy, did I hear about it," Gieseke said.

"We have the discussion all the time. Yeah, that's a nice picture, but do I really want to look at it for a whole month? That squirrel is adorable, but is it a month's worth? It could be a squirrel anywhere," Gieseke said. "If there's not a recognizable landmark, it's not a successful picture."

There's more to the calendar than photos. It's also full of information. The pages after July are full of contacts and promotions for the alumni association and its programming, plus a directory of Iowa State colleges and offices.

The calendar itself contains extensive scheduling details. Gieseke puts out a call to university units for calendar information in the spring semester and incorporates much of what she gets: academic deadlines, performances, athletics schedules and public events of all sorts.

Numerous holidays are included, more so in recent years. After Reg Stewart was hired as Iowa State's vice president for diversity and inclusion, he asked if the alumni calendar could highlight a larger selection of holidays, reflecting a wider variety of faith traditions and ethnicities. His office provides a holiday list, which Gieseke said she is pleased to add.

"I think it makes it a more inclusive calendar, and it also opens the eyes of people who don't celebrate some of these things," she said.

Iowa State's alumni calendar is at least 52 years old. The alumni association's version dates back to at least 1982, based on back issues Gieseke has. An even earlier version was included with The Alumnus, the alumni magazine of its day, from at least 1961 through 1974, according to library archives.

Gieseke said she doesn't expect major changes in the future for the calendar. In a member survey a few years ago, about half of respondents said they wouldn't change a thing. She often hears from superfans.

"Some people have rituals where they won't turn the page until the next month. They want to be surprised," she said. (Spoiler alert, don't look at the back cover, which has a gallery of each month's photo.)

Heemstra gets his share of gushing calendar comments, too. He enjoys seeing it displayed so widely, and many people tell him they keep each year's version.

"It's always nice to have the place look prettier than it probably really was," he joked. "They can think of winter as pretty white snow on things."