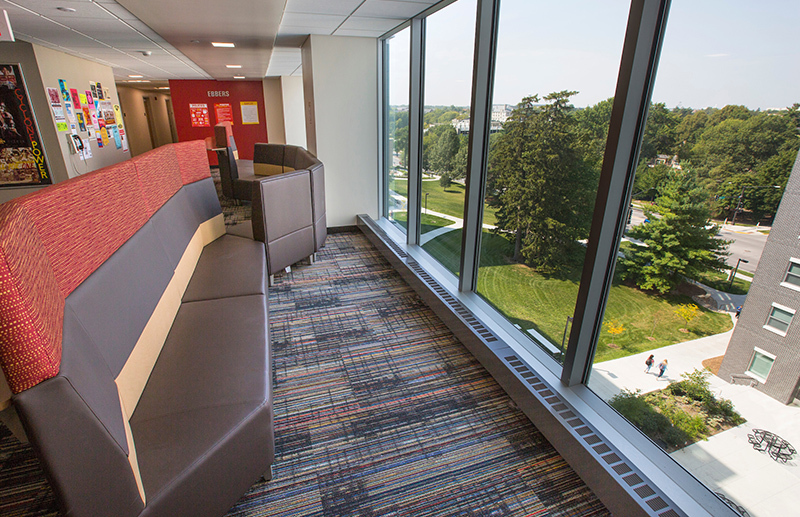 The 'front porch' adjacent to the elevators on every floor of Geoffroy Hall features floor-to-ceiling windows and -- the higher up you go -- a spectacular view of campus. Photo by Christopher Gannon.

The department of residence has earned its first LEED® certification, a gold award in new construction for the eight-floor, 784-bed Geoffroy Hall, which opened in January on Lincoln Way.

LEED (Leadership in Energy and Environmental Design) is a voluntary program of the U.S. Green Building Council that measures environmentally sensitive building design, construction, operations and maintenance. LEED measures achievements in five categories and awards a credit total. Credits also are possible for extra high marks in any category or for green priorities specific to a region. Since 2008, Iowa State has sought LEED certification on its construction and major renovation projects. Gold is second only to LEED's Platinum certification.

Decisions made throughout the design-build process reflect Iowa State's commitment to stewardship and sustainability, said assistant vice president for student affairs and director of residence Pete Englin. At the same time, the university built a residence hall that students love.

"We are grateful to the students who helped us design this building. They told us what they wanted and what's important to them. Geoffroy Hall reflects their input," Englin said. "The way students have reacted to it tells us we hit the mark."

Visitors to Geoffroy Hall perhaps are struck first by its daylit spaces and comfortable, bright activity rooms and study areas. In LEED language, 97 percent of "regularly occupied" spaces have views to the outside.

"There's a 'Wow!' associated with all the daylight and the spectacular views," he said. "Especially at the 'front porch' foyers off the elevator and the informal spaces at the ends of the hallways, there's a sense of bringing the outside in."

Geoffroy Hall also earned credits for many of the strategies Iowa State projects consistently have used over the last decade-plus. Those include:

Other green aspects of the Geoffroy Hall project are:

Kerry Dixon, a project manager in facilities planning and management who oversaw the certification process, said changes in the construction industry in the last decade make it less difficult -- and less costly -- to build environmentally sensitive facilities. For example, materials containing recycled products are easier to find, as are materials made closer to home.

Englin concurred. In addition to its warmth, brightness and energy efficiency, he called Geoffroy Hall "a tremendous value."

"To offer this quality and reach the LEED Gold standard, and to do it for $60,000 per bed, is exceptional," Englin noted.

Dixon said an energy consumption analysis of Geoffroy Hall in a few years will be especially critical because of the "plug load" in a student residence. Construction engineering students track the operating efficiency of LEED-certified buildings for FPM, she said, to see how the operation compares to its design. Most are at or below their anticipated energy consumption.

"Students come to college with so many devices (phones, speakers, printers, televisions, game consoles, refrigerators), so we have less control over the efficient operation of the building," she said. "How will we ensure that building is performing as we wanted?"

Public performances on the carillon, harpsichord, organ and piano (C-HOP) are part of the Sept. 15-16 C-HOP Festival.

Book sales, bake sales, picnics and auctions are among the planned activities.