Leath: Build a campus community that is respectful and inclusive 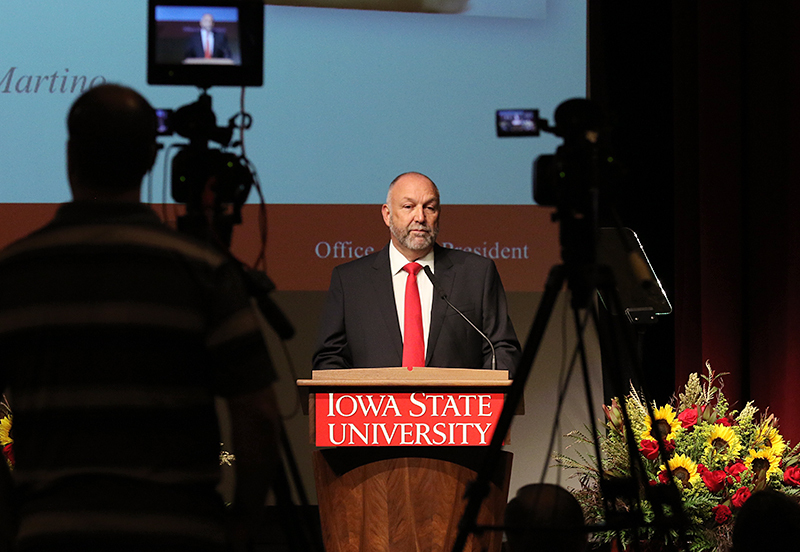 President Steven Leath's 2016 address was livestreamed for remote viewers. An archive of the speech is available online. Photo by Gary Clarke.

President Steven Leath shared these priorities and his observations on the year ahead and just past during his annual address Sept. 14.  Approximately 220 faculty, staff and students attended the event in the Memorial Union Great Hall; another 90 individuals watched the address via livestream video.

While Iowa State recently posted its eighth straight record enrollment, Leath said the "enrollment increase was at a much more modest rate. It's what we planned for and what we hoped for. We want to continue to make an Iowa State education accessible, but we want to grow at a pace that allows us to protect and maintain our quality."

Years of lagging state funding have put the high-quality ISU experience at risk, Leath said. "We have been unable to make meaningful improvements in our national ranking and our student-to-faculty ratio because of the tremendous growth we've seen," and despite hiring more than 400 new faculty over the past five years.

Leath added, "We definitely appreciate what the governor, the Legislature and the Board of Regents have done for us, and try to do for us, but the reality is -- it's not enough."

In 2008, when ISU's record growth began, Iowa State received about $12,700 in state funding per resident student. At that time, nearly 50 percent of the university's operating revenue came from the state and 50 percent from tuition and fees.

Today, Iowa State receives about $9,400 in state funds per resident student, shifting the budget revenue ratio to approximately 30 percent from the state and 70 percent from tuition and fees.

At the same time, "we must make adjustments to the revenue stream that we have the most control over, and, unfortunately, that's tuition and fees."

Officials will propose to the regents a two-tiered tuition structure in which freshmen and sophomores pay a lower rate than juniors and seniors. The rate for upperclassmen would reflect higher costs of more specialized coursework, experiential learning opportunities and personalized instruction. Under ISU's plan, the two-tiered structure would be eased in over a three-year period.

The proposed two-tier tuition structure, together with fee increases, "will help us maintain the quality our students expect and deserve," Leath said. He added that, despite the proposed increases, Iowa State would remain one of the most affordable universities among its peer institutions.

In 2012, Leath launched his Moving Students Forward campaign to raise $150 million in private gifts for student financial aid over five years. That goal, met and reset to $200 million, recently hit its mark, a year ahead of schedule. So far, more than 23,000 students have received support from the fund.

Student support will continue to be a priority as Iowa State kicks off its most ambitious fundraising effort -- a campaign to raise more than $1 billion, Leath said. The official campaign goal and theme will be announced at the public launch Sept. 30. More campaign details will be shared with colleges, departments and units in the weeks and months ahead.

Four years in, the presidential program to provide seed funding to research teams taking on grand, potentially world-changing challenges is going well, Leath said. Two of the original teams winning awards through the Presidential Initiative for Interdisciplinary Research -- one, at work on crop bioengineering, and the other, on design and manufacture of nanovaccines -- are ready to become interdisciplinary research centers, Leath said. These successes prompted the president to expand the program last year to provide funding for projects related specifically to data-driven science.

While expansion of biosciences facilities (the four-story addition to Bessey Hall and the new Advanced Teaching and Research Facility) continues, university officials are beginning work to secure funds for a new Veterinary Diagnostic Laboratory (VDL).

The VDL puts Iowa State on the map as a national leader in protecting animal and human health, Leath said. However, the 1970s-era facility is "now grossly outdated and overcrowded."

Leath said the university will launch a private fundraising effort and make a case to the state Legislature to provide $100 million over five years to help fund a new facility, projected to cost $120 million.

The new Economic Development Core Facility at the ISU Research Park, which opened over the summer, "is finally bringing together all of our economic development assistance efforts in one modern, attractive, easily accessible location," Leath said.

This one-stop shop supports expansion of high-value companies that attract top talent to the research park and state. Two such companies -- Boehringer Ingleheim and Vermeer -- recently opened new buildings at the park.

Over the past four years, the size of the research park has nearly doubled, Leath said, "but we're not done. "We'll be asking the Board of Regents next month to approve another 80-acre acquisition to the park."

A model for diversity

Leath said he believes Iowa State can become a model of diversity and a truly inclusive community.

"We took an important step last year by bringing Dr. Reg Stewart on board and establishing the office of diversity and inclusion," he said. "Now we're moving to expand that office. We are in the final stages of hiring our first LGBTQA+ program director. We're also going to hire our first Hispanic/Latinx program director."

Stewart and others will develop a comprehensive assessment to evaluate the campus climate and provide important information on the educational experiences of underrepresented students.

Leath called on the university community to read and embrace the Principles of Community, drafted a decade ago by student leaders seeking to inspire more respect, open-mindedness and community on campus.

"Racism, bigotry, discrimination -- these are difficult issues to talk about, but we need to talk about them," Leath said. "We're not going to always get it right. But if we can't talk about these things openly and respectfully, it's going to be a lot harder to address these issues and have good results. In fact, the only way we're going to make real progress toward a more inclusive, welcoming campus is if we have open, respectful conversations on these issues."

Iowa State's six-year plan, approved in July, won't become "an old document that just sits on the shelf that we don't really look at again -- or just bring out in six years," Leath said. To ensure follow-through, a group spent the summer developing an implementation and accountability strategy for the plan.

Progress will be tracked and the plan will be updated as needed during annual reviews, Leath said. Top administrators have been charged with managing the plan's four overarching goals. The goals and their managers are: