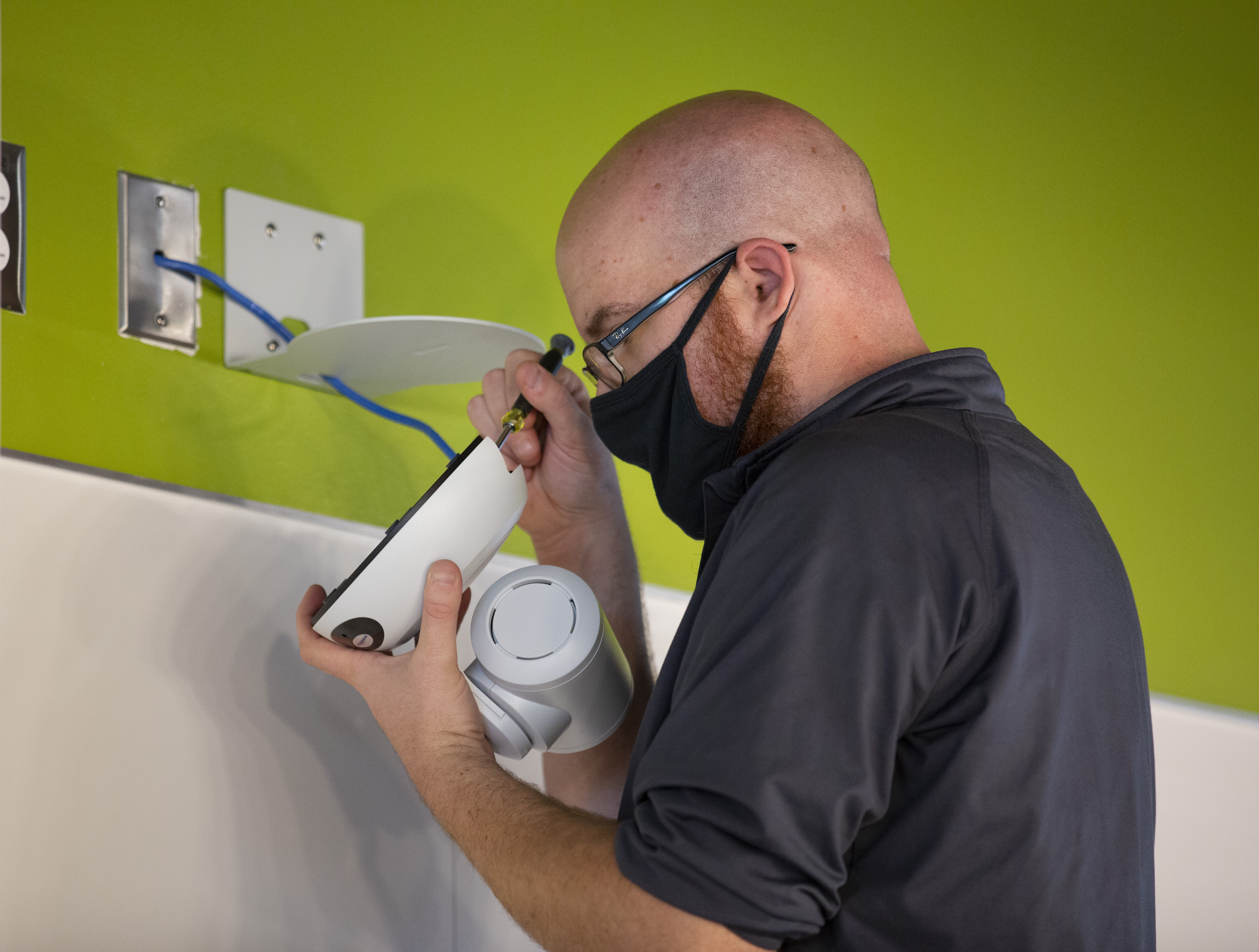 IT Services employee Phil Kuhlman installs a new camera in a classroom inside the Advanced Teaching and Research Building last fall. Photo by Christopher Gannon.

Before the pandemic, only 17 of Iowa State's largest classrooms were outfitted to record and livestream audio and video. As of this fall, all 214 general university classrooms have a video camera system, a rapid adoption of lecture capture technology that's especially useful for hybrid and virtual instruction.

The campuswide push to equip classrooms for video began in the summer and fall of 2020, as the information technology services (ITS) audiovisual experience team scrambled to outfit the general university classrooms large enough to be used despite pandemic-driven capacity limitations. That work continued this summer, when ITS installed camera systems in the 67 remaining smaller classrooms that returned to service this fall.

"This effort got us to the point where every general university classroom on campus has some form of hybrid or lecture capture technology," said Mike Pedersen, ITS audiovisual experience manager.

"We had already been planning for this in the largest spaces. The pandemic just dramatically accelerated that process," he said.

The majority of classrooms feature a basic setup ITS refers to as level two, with a wide-angle camera and a microphone installed at the room's teaching station. Instructors can connect a laptop to use videoconferencing or recording software.

In larger classrooms, ITS installs the more sophisticated level one system that includes a remote-control camera with pan, tilt and zoom capabilities and integration with existing handheld or lapel microphones used for in-room amplification.

ITS maintains an online list of which system is installed in each general university classroom. Forty-three classrooms currently have the more sophisticated technology, and upgrades planned over the upcoming winter and summer breaks will extend the level one system to 11 more classrooms. The level-one expansion will ensure all 31 general university classrooms with a capacity of more than 100 have the higher-end equipment.

Instructions for using the systems are affixed to classroom teaching stations and available online for both level one and level two.

It's not clear how many departmental classrooms are furnished with video systems, but Pedersen said he knows it's a common consideration in department-funded projects.

"I don't know how much effort is going in to retrofit classrooms, but I suspect as rooms are refreshed or constructed it will be a standard expectation," he said.

Expansion of classroom video capacity last summer and during the upcoming winter and summer breaks was funded by a grant from the Committee on the Advancement of Student Technology for Learning Enhancement (CASTLE), which recommends how to use money collected by student technology fees.

The CASTLE grant to ITS also paid for overall audiovisual upgrades in 35 classrooms, including new projectors, document cameras, touchscreen control panels, and HDMI and Solstice connectivity. That work is planned for this summer, including clusters of classrooms in Gilman Hall (10 rooms), Gerdin Business Building (7) and Physics Hall (6).

Two of the largest rooms on the list for an audiovisual refresh this summer are 101 Design and 101 Carver, auditoriums that hold more than 200 people. Facilities planning and management also will be refreshing those rooms this summer, including new seats and carpet, Pedersen said.

"We'll be making some good headway on keeping our classrooms current and up-to-date," he said.