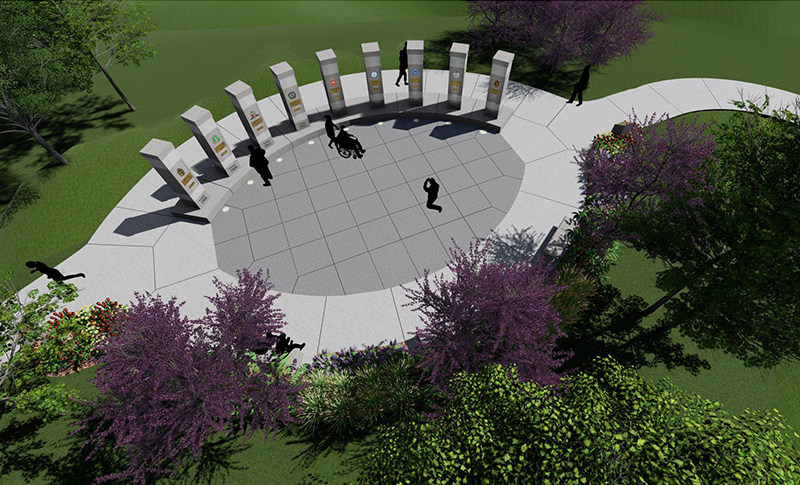 Sketch of the under-construction National Pan-Hellenic Council plaza on the Memorial Union lawn.

On the northwest lawn of the Memorial Union, poured foundations await nine columns at a plaza that will promote the historically Black fraternities and sororities of the National Pan-Hellenic Council (NPHC). On the current timeline, the plaza should be completed by Dec. 1.

Not to be confused with a similarly named umbrella organization for women's sororities (National Panhellenic Conference), the NPHC supports and promotes collaboration among chapters of nine African-American Greek-letter sororities and fraternities. Eight of the nine have chapters at Iowa State, and conversations with the ninth are in progress, said Billy Boulden, assistant dean of students and director of sorority and fraternity engagement.

He said the plaza is about representation and about creating a more welcoming and inclusive campus. He compared it to the large sorority and fraternity homes south of campus, many purchased by their alumni, and the "presence" they provide their organizations and student members.

"The work doesn't end with a plaza. There's a lot more work we can do to create equity and representation, but this is a step in the process," Boulden said.

The completed plaza will be a gathering spot, an events and celebrations place and a space for personal reflection, he said. The expectation is that those who use it will respect what it represents. Its prominent location on central campus will make it visible to many visitors and send a message, particularly to prospective students, that Black lives matter at Iowa State, he said.

Boulden said the plaza also is designed to teach. Each of the pillars will contain information about that organization's letters, purpose and ISU chapter charter date. At the two sidewalk entries to the plaza, visitors can read about the NPHC's history and purpose and the council's history at Iowa State.

You can support the plaza

As construction progresses this fall, anyone can contribute to the plaza project through FundISU, the Iowa State University Foundation's crowdfunding tool. Visit www.fundisu.com, locate the plaza project and click on "Make a Gift."

Dana Savagian, the foundation's associate director for annual and special gifts, said donors may opt to honor one of the nine sorority or fraternity organizations or give to the overall project. Either way, all gifts go to the same fund, she said. Giving options include one-time online, check by mail, recurring monthly gift and payroll deduction for university employees.

The crowdfunding site will close later this fall, though the NPHC plaza fund will remain open for gifts.

The student affairs division provided seed money to launch the project. The goal is to cover most of the estimated $400,000 cost with private gifts.

What is the National Pan-Hellenic Council?

The NPHC was founded in 1930 at Howard University, Washington, D.C., with five charter organizations:

Since then, the council added four organizations:

All but Iota Phi Theta have a chapter at Iowa State.

Boulden said a national network of outdoor NPHC plazas on university campuses "give space back" to students of color, a response to a time in this country when Blacks couldn't own property.

The idea for one at Iowa State was simmering when Boulden arrived in 2013. He said student government president Julian Neely (2018-19), also an Alpha Phi Alpha fraternity member, advanced the project significantly, including a campus tour with facilities staff to scout prospective sites.