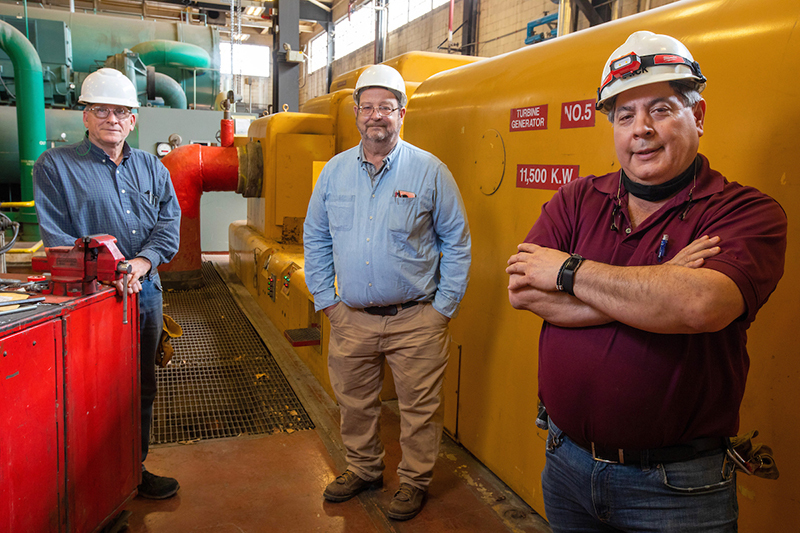 They're the kind of guys you'd probably like as neighbors. Smart troubleshooters who know their way around a tool cart and stay cool under pressure with an "it's nothing" demeanor. After three or four decades each of keeping campus boilers, turbines and chillers humming, there aren't many big problems or small hiccups they haven't faced down.

Which is why it's a bit sad Iowa State will lose all three to retirement this spring.

Power plant supervisors Pat Foley (43 years of service) and Rick Terrones (40 years) are part of the crew that operates the big equipment that heats, cools and provides electricity to campus; supervisor Jim Oberender (33 years) moved to the plant's maintenance/repair side 25 years ago for its consistent day shifts. The university's retirement incentive option (RIO) was too tempting to ignore, and Foley and Oberender will retire next week. Terrones will finish up the first week of June.

Assistant director of utilities Lindsey Wanderscheid, who oversees plant operations, is losing 20% of her 53-person team -- 11 employees with roughly 320 years of service -- to the RIO, but changing technology will make that attrition less bumpy than it sounds.

"There just are fewer things that can go wrong on the new machinery and it takes fewer people to operate it," she said.

Three of the power plant's five boilers were replaced with natural gas units in 2015, and this spring the university sent plans to the state Board of Regents to replace the last two. Coal boilers require more equipment, such as a conveyor system for the coal and a removal system for the ash byproduct. From both an operations and maintenance perspective, they require more attention, she said. Three of central campus' seven chillers, including the newest two at the chilled water plant next to the railroad tracks, are powered by electricity, not steam, also a much simpler process.

Wanderscheid is grateful the three supervisors shared their retirement plans last fall, giving her time to do competitive searches and them time to train their replacements. All three have been in trainer mode since January or February. Not that three months is nearly enough.

"We've been trying to download our knowledge of the plant as best we can to the new supervisors. They're having to learn quickly what took us 10 years or more to learn," said Terrones. A former employee union steward accustomed to supporting colleagues, he transitioned easily into his trainer role and has enjoyed it.

"With people with so much experience on the job, we didn't really use them," he explained. "But the new employees will have them for every boiler, turbine and chiller when they need them."

Come July, most of the team will have 10 years or less of ISU power plant experience, he noted, "but we have some good people coming up who will make this place run as smoothly as we did."

The power plant runs pretty well, Wanderscheid concurred, which is great for efficiency but slows training progress. "Training is about reacting -- and knowing how to react when there's a problem," she said.

How many employees are participating in the retirement incentive program this year?

The three supervisors have strong memories of the handful of times the power plant shut down -- "going black" they call it -- from something as small as a squirrel or as overwhelming as a 500-year flood (2010) or a derecho (August).

"It becomes especially apparent during those trials how the whole group steps up to get the utilities back to campus and the loyalty and pride they have in their work," Wanderscheid said.

Even with all hands on deck, it's a 14-hour process to start up a coal boiler.

Foley, who was on vacation last Aug. 10, reached campus by 11 a.m. and worked through to 7 a.m. to resolve some enormous stuck valves on boiler water heating tanks. Gas boilers typically can restart in an hour or less.

"That's the magic part: to know what to check and how to bring the system back online," he said. "I have enjoyed the ability to come in here and use the knowledge we pick up and actually do stuff, really work.

"When you can say 'Hey, we kept the place running for another day,' that's worthwhile."

Foley, who started shoveling ash full time while a student, is known for tracking the "why" behind all the "what" in the power plant.

Established in the early 1980s, the Valuable Ideas for Productivity program for state employees paid 10% of the savings realized (up to $2,500) to employees for their recommendations. Foley earned the highest award, $2,420 in 1983, for calculating heat loss in the boiler room, and followed up in 1987 with a patent on an electrical device that regulates air flow in a furnace for peak efficiency, what he calls "improving the art."

Oberender read his retirement contract four times before he was ready to sign it. And there was a tug of regret when he officially turned over supervisory responsibility March 8 to his successor.

"I hated to give it up, but I got over it in a couple of days. There still are plenty of questions to answer," he said.

As maintenance supervisor, Oberender's was the name called most frequently on the plant's intercom system. His team completes repairs or adjustments to keep the many parts of the big machinery running efficiently.

"I've always enjoyed working here. I like to stay busy and there's a lot of investigative stuff to do," he said. "I look at things, figure out how they work and what's wrong," a skill he attributes to growing up on a farm.

For example, he recalls recurring problems with a boiler fan. After some analysis, he realized the thrust and load bearings were reversed.

"Just because parts look the same doesn't mean they are," he explained.

In the late 1990s, he trained for five days in Richmond, Virginia, to use lasers to align motor and fan shafts, where the tolerance is 3/1,000 inch. Going from a dial indicator to lasers turned a day's job into an hour's job and resulted in sharper alignment and fewer breakdowns, Oberender said.

Wanderscheid said it's been a blessing to have the three men's leadership in the power plant.

"The utility production employees are like family. I'm sad to see them retire, but I'm excited for them to move on to the next chapter in their lives.

"We're so grateful for what they've done over the years to support Iowa State University."

ISU alumnus Michael Crow has turned Arizona State into a top innovator in higher education since becoming its president in 2002. He will discuss the drive to innovate and what's next during an April 2 forum.