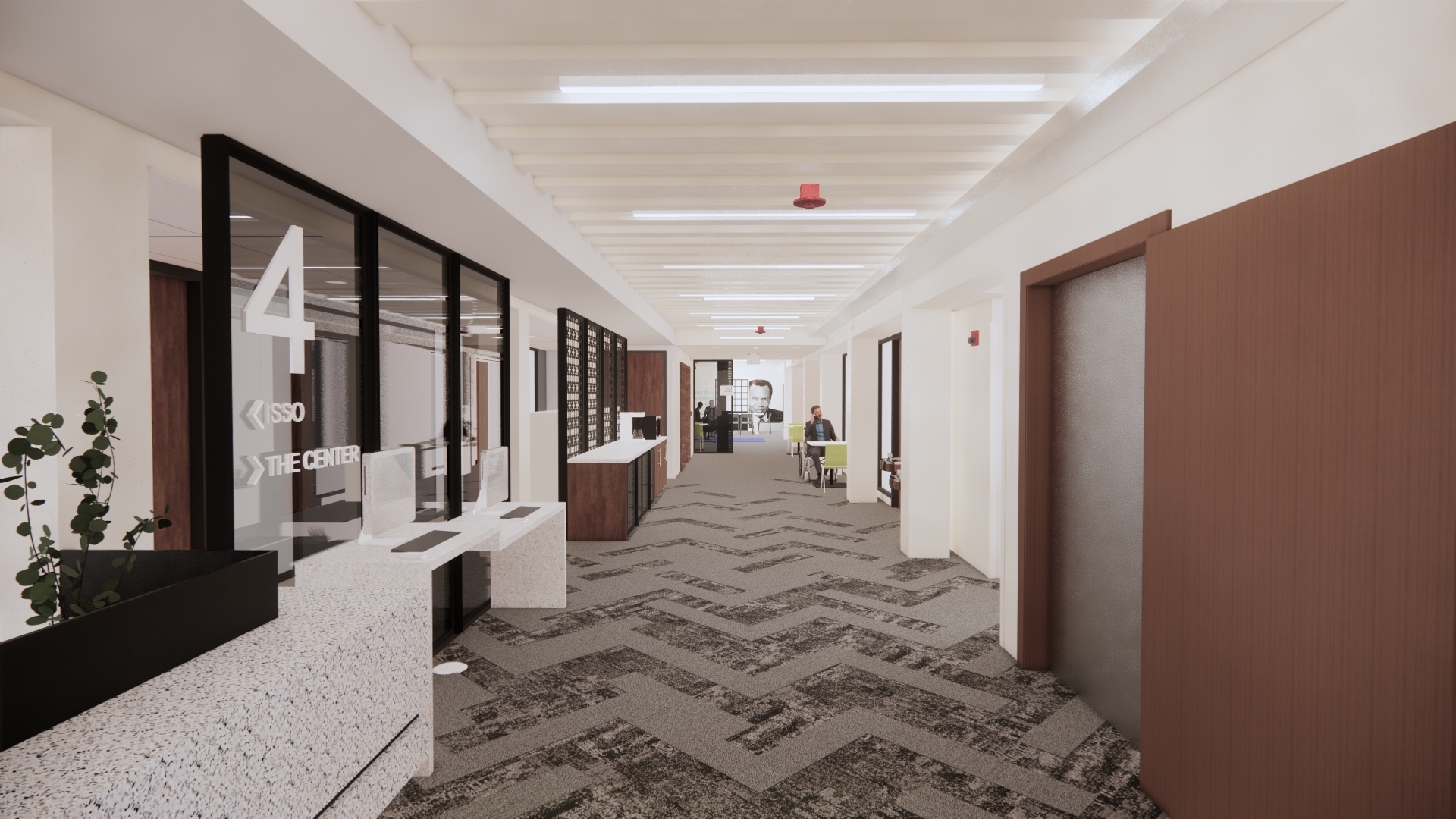 Sketch looks west from the elevators and reception area on a renovated fourth floor. Image courtesy of Invision Architecture.

The top three floors of the Memorial Union (MU), which have worked hard for 92 years -- as hotel rooms, student living space and most recently employee temporary offices -- are getting a major renovation beginning next month. Sometime around March 2022, seven student-focused service offices will move into modern, comfortable, daylit work spaces. The $10 million renovation will eliminate some deferred maintenance and replace the heating, cooling, plumbing, electrical, communications and security systems for floors four, five and six -- roughly 23,000 gross square feet total. But it also represents huge gains in getting more student-centered activities into the student union.

"With this project, we begin the process of expanding the services and spaces we're able to provide to the student body and the campus community," said MU associate director Brad Hill. "We're excited that the ISU student body has committed to investing in the MU through this renovation so we can continue to provide a safe, dynamic and welcoming environment for all."

Hill said many of the building's deferred maintenance issues aren't unusual in structures nearly 100 years old. But the list is growing, and he said it's critical to invest in remedies.

"This renovation also provides us the opportunity to take a small step in addressing the large amounts of deferred maintenance throughout the building," he said. 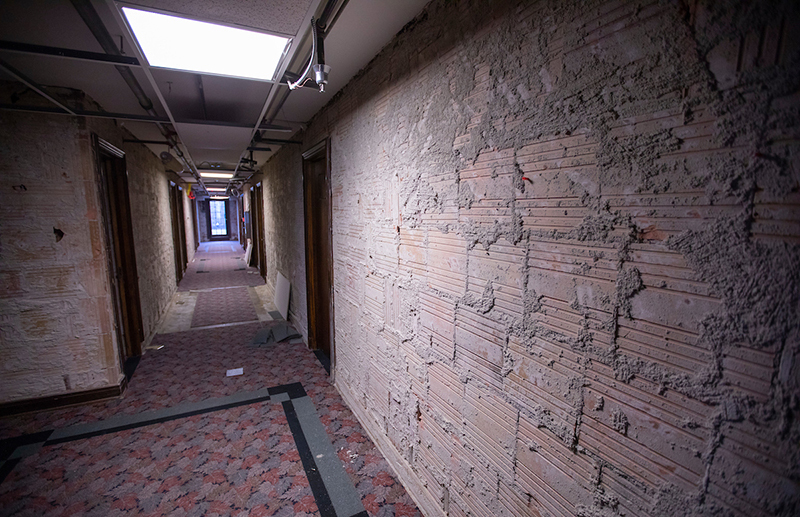 A demolition phase, which will begin the first week of January and account for about 10% of the project, will remove all interior walls except those surrounding two central elevators and southeast and southwest corner stairwells. Abatement, primarily of lead-based wall paints, is complete on floors five and six, and will continue on the fourth floor after the final Ivy College of Business tenants return to Gerdin offices this month.

Replacing narrow corridors and small rooms will be a brighter, open floor plan that provides central work and student collaboration spaces and distributes staff offices around the perimeter. Restrooms and a shared reception area will be centrally located on each floor, and the peak ceiling uncovered on the sixth floor.

While numerous additions to the Memorial Union created expansive lower levels, its top floors are noticeably smaller -- about 15 yards wide and 46 yards long on floors five and six, longer at 66 yards on the fourth floor. When the renovation is complete, tenant assignments will look like this:

"This project will improve the quality of everyone's experience," said project manager Kerry Dixon, facilities planning and management. "It's cleaner, brighter space for the staff who will work there, and students will have an easier time finding these services."

Dixon said features of the redesign respect the history and architecture of the Memorial Union while modernizing it "for the next 100 years."

All demolition materials and new building materials will go down and up the east exterior of the building, using a fifth floor outdoor patio as a staging area. Similar to when the MU's slate roof was replaced in 2016, the north entrance to the Memorial Union parking ramp will close later this month to make room for scaffolding and a crane and remain closed for a year. The ground-level east entrance to the MU will remain open during the renovation project.

The state Board of Regents, which approved the project a year ago, is scheduled to sell Memorial Union revenue bonds over two years to fund the project, and student activity fees will help repay the bonds.

In the spring of 2017, ISU students voted down a $65 million renovation proposal that would have tackled many of the building's deferred maintenance and programmatic needs. MU leaders opted to break down those needs into smaller projects, of which this is the first. The second floor (Great Hall level) and the third floor in the east Memorial Union are likely future projects, as funds are identified, to revive existing space and better serve students.

The Memorial Union opened in the fall of 1928 and has received 11 additions since then, including a parking ramp in 1967. The top two floors actually were left unfinished until 1937, when the fifth was completed as a second hotel floor and the sixth as a student dormitory with a central bathroom. In 1974, the sixth floor was renovated as a third hotel floor.

The Memorial Union hotel closed in July 2016, and for two academic years, 2016-17 and 2017-18, those three levels functioned as a student residence hall to help meet the demand for on-campus housing. For the last six years, many of the rooms also have served as temporary offices, including for faculty and staff whose home buildings -- Marston, Curtiss, Gerdin -- were being renovated. 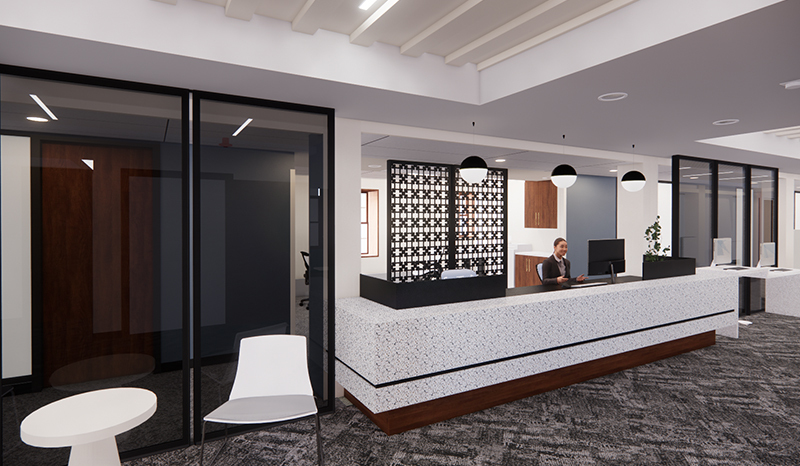 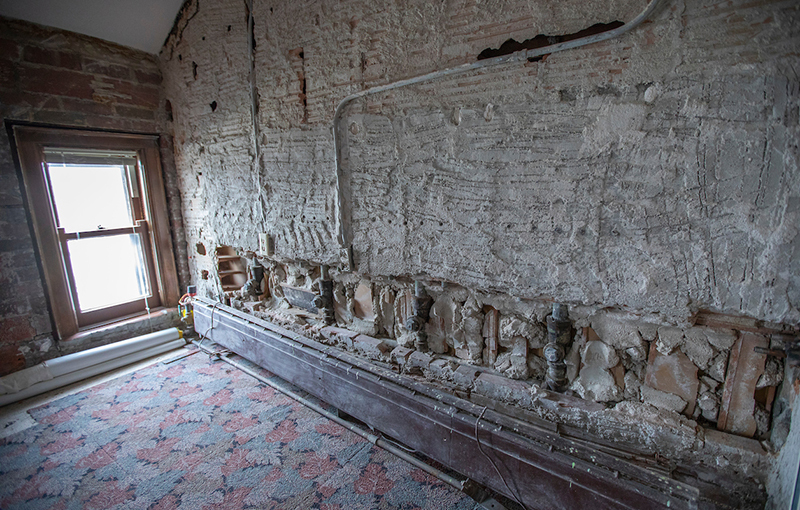 When crews removed wall plaster during abatement, they uncovered in this wall sink plumbing remnants from a dormitory-style bathroom on the sixth floor. Photo by Christopher Gannon. 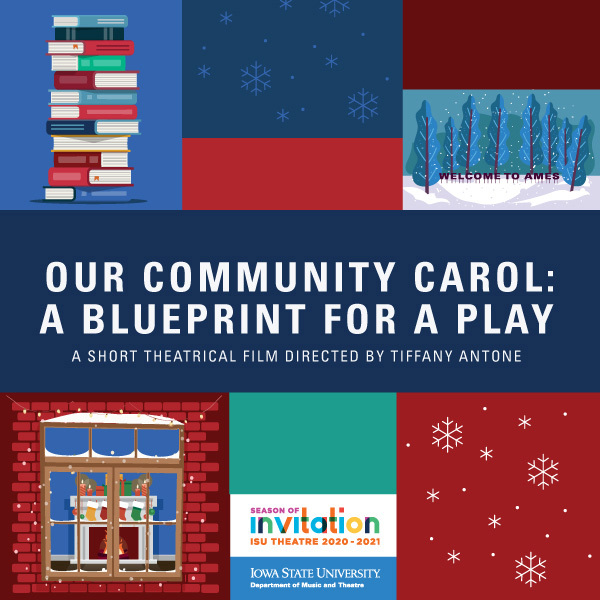