The athletics department has announced plans for the basketball season that will cap attendance at 1,373 fans per game, or just under 10% of Hilton Coliseum's 14,384-seat capacity. Only season ticket holders for the men's and women's programs will have an opportunity to purchase single-game tickets, about 75% of which will be in the arena's upper level.

"The safety of all participants and fans remains our top priority," Cyclone athletics director Jamie Pollard wrote in a Nov. 5 letter to fans, noting that community or campus COVID positivity rates could compel him to modify the fan plan during the season.

Mitigation strategies for basketball fans will include face coverings for everyone all the time, assigned seat pods that are physically distanced, hand sanitizer stations throughout Hilton and additional sanitizing of high-touch surfaces. Concession stands will only sell bottled beverages, though fans may carry in snacks in a clear bag. Eliminated for this season are printed programs, team posters, postgame autograph sessions, cheer giveaways for fans, T-shirt tosses and courtside seats. Fan venues at Johnny's (Hilton) and Stagedoor (Scheman) will remain closed. And as with volleyball home contests this fall, the seating ring closest to the court known as arena circle will be recessed to create more sideline space for the teams and score table officials and limit access to the main floor.

The men's basketball team is scheduled to play at home 14 times this season, including five nonconference games and nine conference games. The women's team is scheduled to play in Hilton 13 times, including four nonconference and nine Big 12 Conference games. Single-game tickets will be sold to interested season ticket holders Nov. 13-20 in a staggered schedule based on Cyclone Club donation levels. Depending on availability at the time of purchase, season ticket holders could buy tickets for up to seven home games spread across the three-month season. Ticket purchases will include single-game parking passes.

Pollard noted that regardless of whether they purchase single-game tickets this year, all 2019-20 season ticket holders will have first rights to their tickets and seat locations for the 2021-22 season.

According to the Hilton basketball seating plan, 904 seats will be reserved for season ticket holders or the public, 148 for ISU student fans, 84 for family and friends of ISU players and coaches, 50 for the pep band and spirit squads and 50 for fans of the visiting team. The rest (137 seats) are reserved for game operations, media, athletics department staff, guests of Cyclone Sports Properties and fans requiring accessible seating.

Pollard said fan plans at Hilton for the Cyclone gymnastics and wrestling seasons will be shared soon. 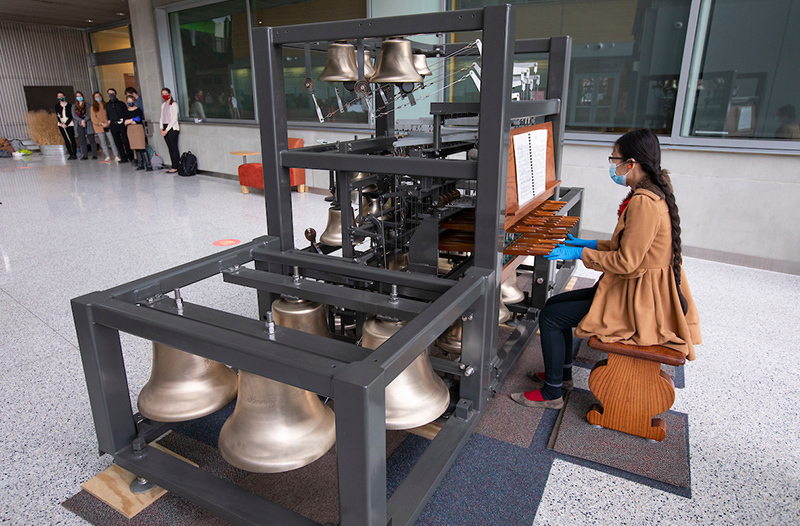 Class concert to be played on carillon model

Carillon students will perform at 12:30 p.m. Friday on the scaled carillon in the Sukup atrium.