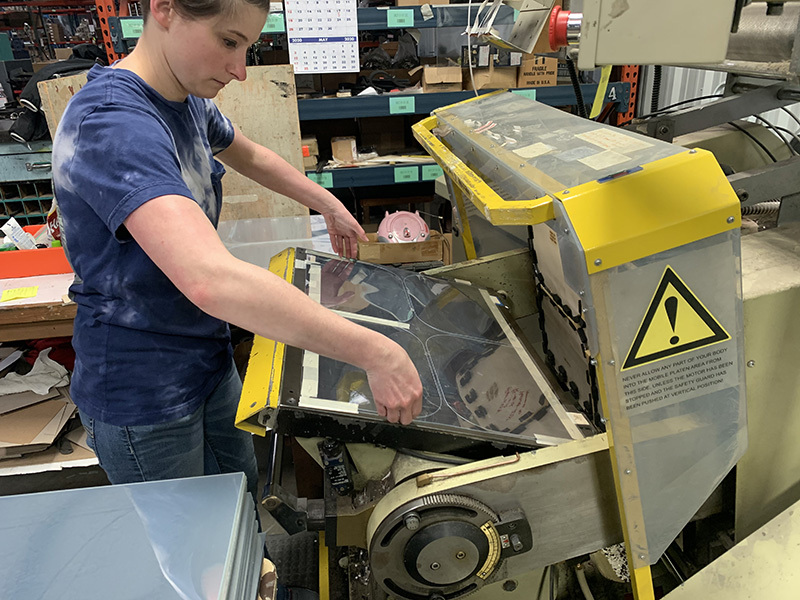 An employee of The Dimensional Group working on face shields at the company's Mason City plant April 15. The manufacturer began making the needed safety item last week after encouragement from Iowa State's Center for Industrial Research and Service. Contributed photo.

Many health care facilities are concerned about obtaining critical supplies, while orders for other goods are slowing down if not drying up. The pair of common coronavirus supply-and-demand issues suggests an easier-said-than-done answer: retool production lines to make what the health care industry and governments are desperate to buy.

ISU's Center for Industrial Research and Service (CIRAS) has been helping Iowa manufacturers go from said to done faster during the COVID-19 crisis, getting needed protection to health and safety workers while also protecting manufacturing jobs threatened by a severe slowdown. And reconfiguring factories to make front-line workers safer is just one of the ways CIRAS is supporting Iowa businesses in challenging conditions.

CIRAS is part of the College of Engineering and the office of economic development and industry relations, headquartered in the Economic Development Core Facility in the ISU Research Park though more than half of its 40-person staff is spread throughout the state. It offers a wide range of services for solving technical and strategic problems, connects companies with university expertise and resources, hosts statewide workshops, and administers several state and federal business development programs. It has contact, often in intensive ways, with about 1,700 Iowa businesses per year, with an emphasis on manufacturing.

Those relationships allowed CIRAS staff to quickly react when it heard from state officials March 27 about the expected shortage of personal protective equipment (PPE) in Iowa, including more than 500,000 each of plastic face shields, masks and cotton gowns. Only existing manufacturers would be able to provide that volume, said Mike O'Donnell, CIRAS manufacturing program director. CIRAS staff began calling companies that could help.

"Some of this we just have in our heads. Some is in our database," Cox said. "If we hadn't already had those connections, this might have taken weeks."

Instead, the calls took a few days, and about 100 businesses said they were interested, O'Donnell said.

Within a week, CIRAS assembled public lists of Iowa companies making or prepared to make PPE or hand sanitizer, O'Donnell said. In addition, CIRAS heard from dozens of companies who could assist in a partial way, such as providing needed materials, labor or expertise. It has helped some of those manufacturers coordinate their efforts.

"These are companies of every shape and size. For some, this is a world they've never imagined," he said. "Statewide, the best role we can serve is to connect companies that can move quickly and to solve focused problems when they come up."

Given that companies are making unfamiliar products and selling to new customers, the snags run the gamut. CIRAS staff who specialize in government contracting have helped break down communication barriers, while other CIRAS staff have helped companies sort out required specifications and standards with buyers, Cox said.

"We speak manufacturing. When a manufacturer wants to help out on something, we know what questions they're going to have," he said.

Some companies have needed advice on constructing bids because they don't know what their costs will be. "These companies are moving into this with no innate sense. Should they be assembling 10 units per hour or 1,000 units per hour?" O'Donnell said.

In other instances, staff have assembled partnerships. To encourage face shield production, CIRAS brought together The Dimensional Group and Angstrom Precision Molding. The Dimensional Group, of Mason City, makes many custom products and could create the shield. Angstrom Precision Molding, of Ottumwa, could make the halo that holds the shield but needed assistance designing and obtaining the molding.

"Over the course of a few days, we put together a process," said Adam Gold, owner of The Dimensional Group.

CIRAS technology program director Chris Hill was in on every discussion between Gold and Angstrom chief operating officer Jim Johnson and even coached them on product design.

"He was absolutely instrumental," Gold said.

CIRAS is coordinating manufacturing requests related to COVID-19 health care needs. Faculty and staff who receive such a request should send it to ciras.info@iastate.edu so it can be logged and reviewed. Faculty and staff who have a desire to help and the relevant research capabilities -- such as medical device manufacturing, rapid factory changeover or pursuing highly regulated markets -- should contact Mike O’Donnell at modonnll@iastate.edu.

Both companies are selling their product at cost, but it helps keep their workers employed at a time when business is slowing down. Gold said by the end of this week, they'll have delivered 65,000 face shields, and production capacity could reach 100,000 units next week. Based on the need and the downturn in other orders, most of Gold's 50-person staff likely will be focused on face shields by the end of the month, he said.

Beyond boosting PPE production, CIRAS has fielded hundreds of questions from businesses about how they should adjust operations during the crisis. Detailed guidance on many of those issues is offered in tip sheets on its COVID-19 business resources webpage.

They're also tapping university experts to work through complex problems that have emerged in the crisis. For instance, an ISU team that includes Thielen Student Health Center and environmental health and safety staff is exploring procedures to safely reuse and decontaminate N95 masks, Cox said.

CIRAS is working with the Center for Crops Utilization Research on ways to mitigate the disruption of the carbon dioxide supply caused when ethanol plants temporarily shut down due to decreased gas prices. The plants also produced carbon dioxide, which is used extensively by food manufacturers, O'Donnell said

"These are new problems that didn't exist a month ago. We've had to pivot to look for new information and new sources," Cox said.

If dealing with the public health emergency is part A, part B -- economic recovery -- is coming soon, O'Donnell said. In the past week, questions CIRAS has received from Iowa businesses have changed. The initial surge of inquiries about operations has passed.

"Companies are starting to say, 'What's my cash flow look like? What do my markets look like?'" he said. "That's what we're starting to get the first inklings of right now."

That also bears out in a rolling survey of Iowa businesses CIRAS began conducting in March that will continue in the coming months, O'Donnell said. When the survey kicked off, most businesses were operating at 80% at worst. About 40% have been running at half capacity or less in the most recent surveys, he said.

"Everybody's going to be impacted by this in some way," Cox said.

As CIRAS moves to help administer relief programs, additional student staff will be hired and outside consultants will be needed, O'Donnell said.

"That's an all-hands-on-deck activity," he said.

Most of those services will be free for businesses, as they have been in the response to the PPE shortage, he said.

Gold said he thinks CIRAS is well-positioned to help the state's industries manage the recovery, in part due to their pre-existing relationships and their response so far.

"From what I've seen, they've been extremely aggressive in engaging and asking if there's anything they can do to help," he said.

The front line
Instructors show their adaptability with online testing
CIRAS helping Iowa's factory lines shift to protect front-line workers
P&S employees are closer to learning their new job titles
Graduation weekend will be an online experience
By the numbers: The skyrocketing use of virtual meetings