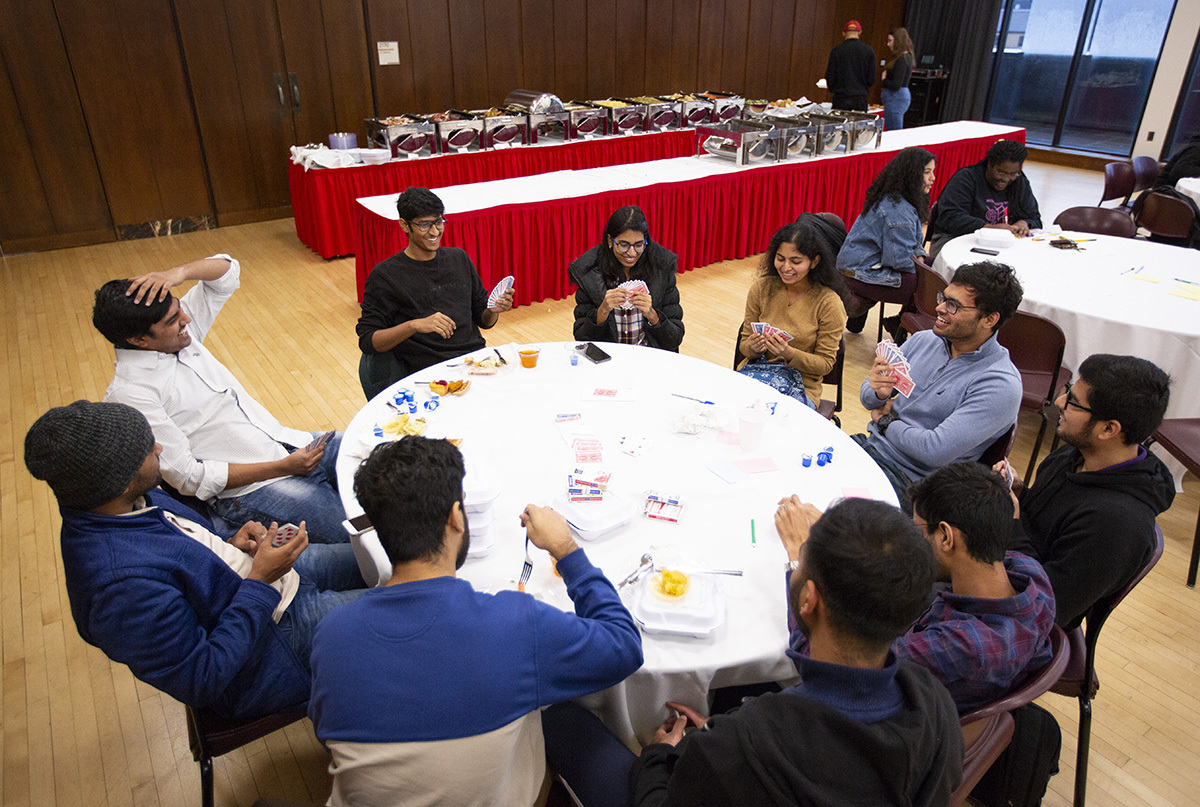 A tableful of guests enjoy card games after eating at a free community meal Nov. 26 in the Memorial Union Sun Room. Photo by Christopher Gannon.

Fall break wasn't a festive time for students like Masoud Salehi and Ali Tehrani, for a variety of reasons.

As doctoral students, they were grateful for a chance to concentrate on their research. As natives of Iran who remained on campus while many faculty, staff and students were spending time with family, their offices got lonely -- a common year-round lament for international students that's heightened when the university is out of session. 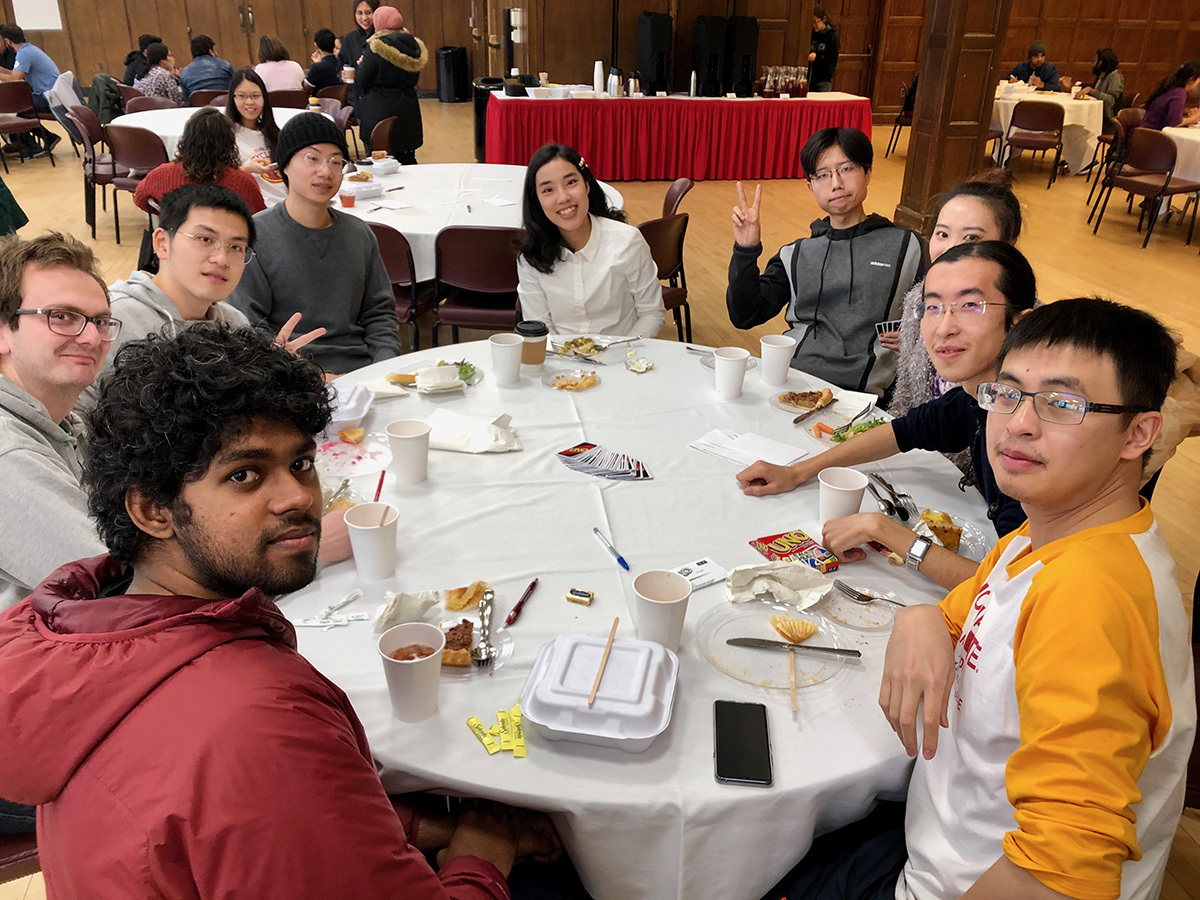 An annual community dinner held before Thanksgiving makes the break week a little less solitary for students still on campus. The 2014 inaugural event welcomed just a few dozen students at the Sloss House. It has grown quickly since, with this year's version drawing more than 450 students to the Memorial Union Sun Room on Nov. 26.

The free dinner is open to anyone but is especially important for international and multicultural students, said Navya Mannengi, orientation and engagement coordinator for the international students and scholars office (ISSO).

"It shows them we have a community here that they're part of," she said.

That's how Salehi and Tehrani felt after their first taste of a traditional Thanksgiving spread that included turkey, ham, stuffing, macaroni and cheese, green bean casserole, mashed potatoes and pie. They struck up a post-dinner Uno card game with a pair of students from Bangladesh.

"I wish we had more times like this," said Tehrani, a doctoral student in computer science.

ISSO and college multicultural liaison officers co-host the four-hour dinner, which features a buffet followed by games and conversation. Organizers ask students about their holiday traditions in the RSVP, some of which they try to incorporate, said Elizabeth Martínez-Podolsky, multicultural student success director for the College of Agriculture and Life Sciences. The music, for example, was an ISSO-assembled Spotify playlist.

"Some of those things make it a little more like home," Martínez-Podolsky said. 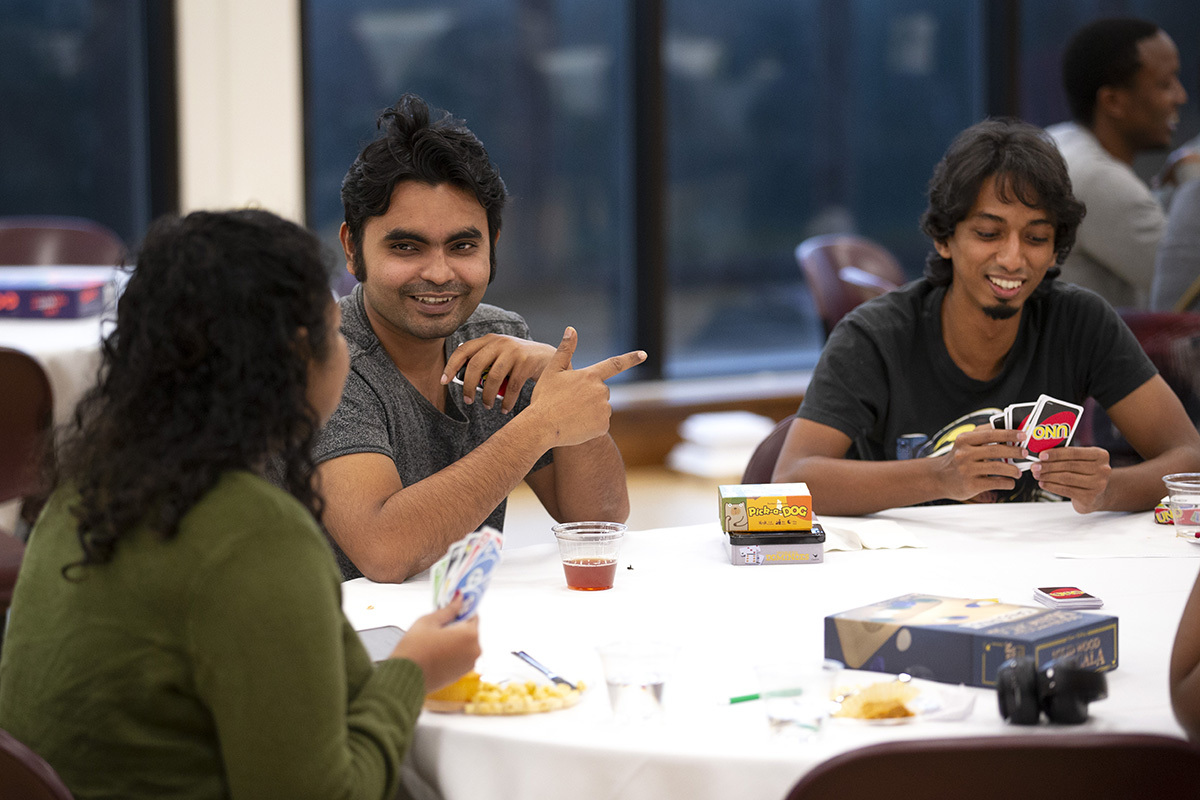 Beyond the organizing sponsors, the event gets support from the International Nest, the LAS International Student Network and ISU Dining. Earlier years sometimes included more diverse dishes before organizers settled on American Thanksgiving standards, which international students often are enthusiastic to try.

Sakhawat Saimon, one of the Bangladeshi students playing Uno, said while the food was more bland -- and the vibe less chaotic -- than at festivals back home, he enjoyed exploring other flavors and meeting more people.

"It's about getting to know new things. We have to accept the differences," said Saimon, a doctoral student in computer science.

Welcome back to central campus
Navigating gift policies in the season of gift-giving
Free feast connects students who remain over fall break
Students test communication skills at Science with Cy
What to do about spam calls? Let it go.