By Rob Schweers, office of the senior vice president and provost
October 17, 2019

Sexual assault and misconduct continue to be significant issues on college campuses across the nation, but awareness and bystander intervention are improving, according to Campus Climate Survey on Sexual Assault and Misconduct results released Oct. 15 by the Association of American Universities (AAU).

Last March, the web-based effort surveyed more than 180,000 students at 33 participating U.S. institutions, including 4,800 from Iowa State. The group included one of the largest sample sizes of respondents who self-identified transgender, nonbinary, genderqueer or questioning.

An estimated 13% of respondents nationally experienced an assault (defined as nonconsensual penetration or sexual touching involving physical force or incapacitation) during their college careers. At Iowa State, the comparable figure is 11.3% and, while lower than the survey average, it is an increase of 1.6% from the AAU's 2015 survey.

Iowa State leaders say the incidence rates remain too high and addressing these problems will continue to be a high priority.

"Even one incident is too much," said President Wendy Wintersteen. "These results provide valuable information that will help us refine our training programs and move us closer to our goal of preventing sexual assault and misconduct on our campus.

"It's critically important that we come together, not only as a campus community, but as an entire state, to look at the causes of sexual assault and misconduct, to encourage victims to come forward, and to intervene when individuals are at risk."

Five other forms of sexual misconduct -- coercion, harassment, stalking, intimate partner violence, and sexual activity without active, voluntary and ongoing consent -- also were included in the survey. Overall, 5.5% of students reported they had been victims of incidents that occurred without active, ongoing and voluntary consent.

Among ISU respondents, 16.5% of female victims and virtually no male victims contacted a university or community resource regarding their experience. The most common reasons for not reporting included feeling embarrassed or ashamed, thinking the incident wasn't serious enough to report, not feeling injured or hurt, the event happening in a context that began consensually, and feeling (s)he could handle the situation themselves.

While reporting remains low, awareness of university resources has increased since the 2015 survey, with 36.1% of students reporting they were very or extremely knowledgeable about university definitions of sexual assault and misconduct, and 35.9% knowing where to seek help in such cases. More than three quarters of students perceived it was very or extremely likely the university would take a report of sexual assault or other misconduct seriously, also an improvement from 2015.

Friends and bystanders play an important role in preventing sexual assault and misconduct. Among the 12.6% of ISU students who have witnessed a situation they believed could lead to sexual assault or misconduct, 73% took some type of action, and 43.7% directly intervened by interrupting the situation, or confronting the person(s) engaging in inappropriate behavior.

"Students are taking action when they see situations they believe could lead to sexual assault or misconduct," said dean of students Vernon Hurte. "These actions may seem small at the time, but they can make a profound difference in the lives of potential victims."

Alcohol use is a common thread among victims

"Let me be clear, no victim is responsible for their own sexual assault, including if they have been consuming alcohol," said Margo Foreman, assistant vice president for diversity and inclusion and Title IX coordinator. "However, because alcohol is such a prevalent risk factor, it is critical that we focus some of our educational efforts, including bystander intervention training, on bars and nightclubs, parties and other environments where alcohol consumption is common."

Iowa State has an amnesty policy for students who report incidents of sexual assault in which alcohol is involved. First-year students entering Iowa State from high school also are required to complete AlcoholEdu, an online training program focused on responsible alcohol use.

ISU efforts to prevent sexual assaults and encourage reporting and bystander intervention since the first AAU survey results (2015) include:

A history lesson from George Washington

Fasten your seatbelts for a wild ride through history with ISU Theatre's musical production of "Chasing George Washington: A White House Adventure." 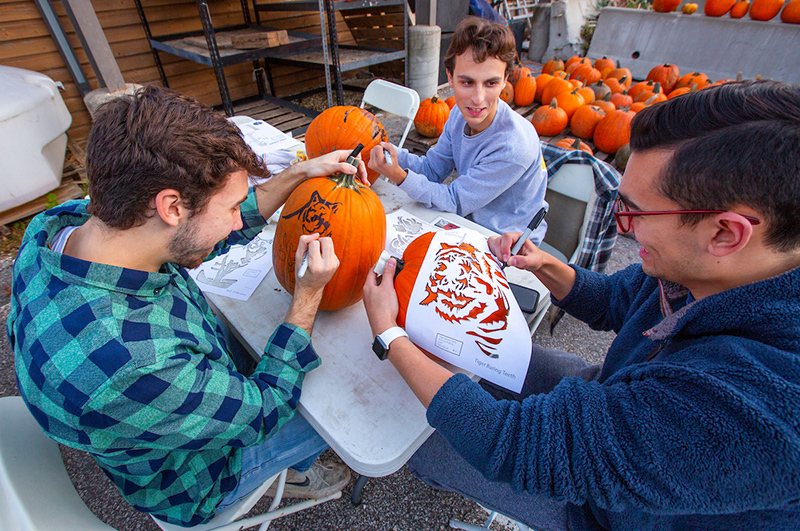 One pumpkin at a time

Hundreds of volunteers are preparing jack-o'-lanterns for this weekend's "Spirits in the Gardens."

Young adults are not getting treatment for substance use disorders
Model of campanile and carillon to be unveiled Oct. 27
Design programs rank among top 25