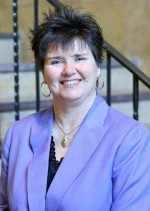 Carolann Jensen, chief operations officer for the Iowa Finance Authority, Des Moines, will become the state relations officer for Iowa State on Aug. 26. Officially, she is a state Board of Regents employee, and this was a collaborative hire between the board office and the president's office.

Jensen has worked for the IFA since 2011. Her service included time during 2018 as interim executive director and chief programs officer. Previously, she spent 24 years as a senior research analyst for the Republican caucus in the Iowa Senate.

Jensen succeeds Kristin Bauer, who joined the legal staff in the board office.

Influences on diabetes risk, management for African Americans
Predicting when a machine will fail