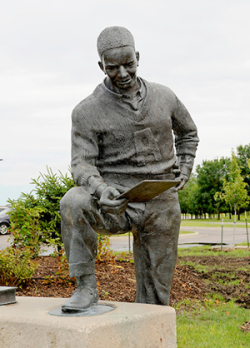 The Jack Trice statue was moved from central campus in 1997 when the football stadium was named for Trice. File photo.

The Jack Trice statue, which has been located outside the north entrance to the football stadium since 1997, will be returned to central campus.

The statue needs to be relocated from Jack Trice Stadium due to the construction of the new Sports Performance Center. Rather than temporarily relocate it during construction, a committee of campus and student leaders proposed permanently returning the statue to central campus and using the construction project as an opportunity to develop additional visible ways to recognize Trice's legacy in and around the stadium.

Jack Trice was Iowa State's first African-American student-athlete. He died from injuries suffered in a 1923 football game. The Jack Trice statue originally was located between Beardshear and Carver halls from 1988 to 1997.

The committee, consisting of leaders from the student affairs division, athletics department, office of diversity and inclusion, facilities planning and management (FPM), university museums and Student Government, consulted with the academic affairs division, the Black Faculty and Staff Association, Professional and Scientific Council and Faculty Senate before sending the proposal to senior leadership and the president for approval.

"Moving the statue back to central campus is a wonderful way to lift up the prominence and recognition of Jack Trice's legacy to the entire Iowa State community," said President Wendy Wintersteen. "I appreciate the careful thought and wide input that helped us arrive at this important decision. We plan to convene another committee to help decide how we can further share Jack Trice's story."

Consensus on a central campus location for the statue is between Beardshear Hall and the Hub, a high traffic area that provides visibility. The athletics department is working with FPM and university museums to move the statue in the coming weeks to a short-term holding area until the new site is ready this summer.

"Returning the statue to central campus provides an opportunity to significantly expand awareness of Jack Trice's story beyond athletics," said director of athletics Jamie Pollard. "We look forward to working with a committee to help identify how we can further enhance Jack Trice's legacy in and around our facilities."

Student Government president Julian Neely said moving the statue is important in two ways. "First, relocating it to central campus honors Trice's scholastic excellence as a student-athlete. Second, it provides an opportunity for a new Jack Trice tribute that we hope will be a larger display as part of the new plaza and sports performance center," he said.

Plans to further celebrate Jack Trice's legacy will be incorporated into the overall planning for the Student-Athlete Sports Performance Center. The $90 million center project, funded by private support and athletics funds, began this month and will take two years to complete. 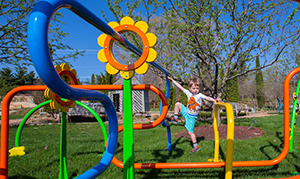