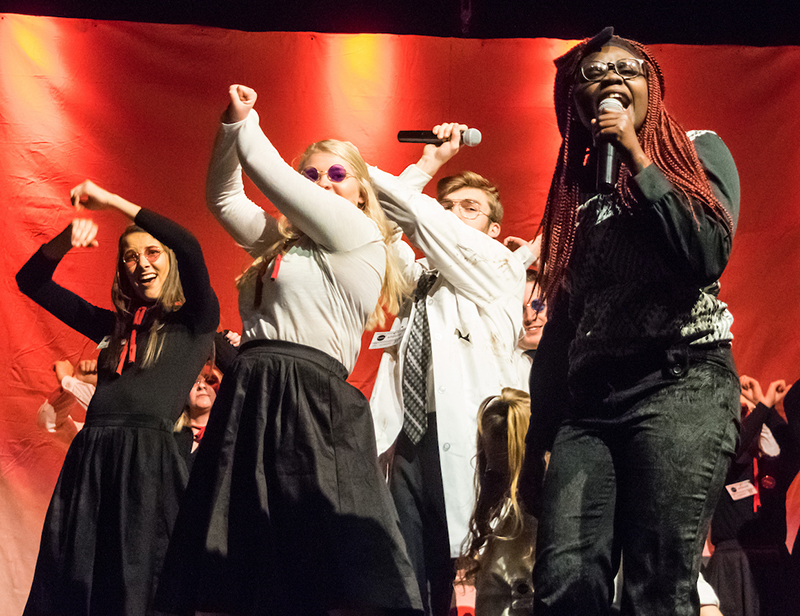 Student actors in the "Space Jam" mini-musical captured third place in the finals of the 2018 Varieties. File photo by Joe Kastner.

The Varieties format includes 20-minute mini-musicals involving several dozen actors and original song lyrics and choreography, separated by shorter performances -- solo or small group -- featuring talents such as comedy, magic, dance or instrumental music. Student emcees will introduce all of the acts, although Varieties' third competition -- among emcees -- was removed. "Tradition Lives On" is the 2019 theme students try to weave into their performances.

Two student groups will perform their mini-musicals Friday evening and three at Saturday's semifinal show. All five move on to finals. Five vignette acts will perform Friday and four on Saturday, with just four advancing to finals.

Tickets, $10 for the public and $6 for ISU students, are available through Midwestix or at the Maintenance Shop box office (11 a.m.-5 p.m. weekdays) on the MU ground floor.

Two "finals" performances will be held Friday-Saturday, Feb. 22-23 (7 p.m.), also in the MU Great Hall. Judges will use a cumulative points system across all four Varieties performances, and winners will be crowned after the Saturday performance based on total points. Finals tickets are $12 for the public and $8 for ISU students, also via Midwestix or the M-Shop box office.

Varieties semifinals are this weekend; finals set for Feb. 22-23.