MU's top floors housing one last round of temporary tenants 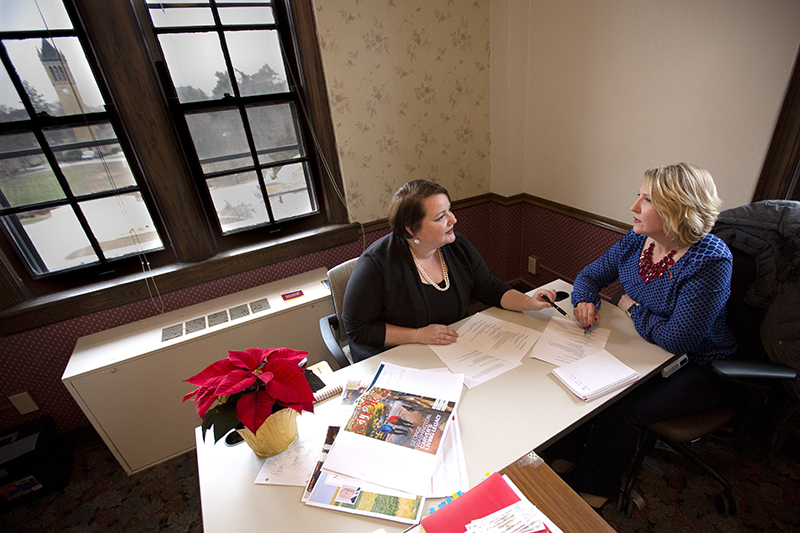 One last time before a major renovation, the top three floors of the Memorial Union are serving a new but temporary purpose.

For roughly their first 15 years, the MU's fourth, fifth and six floors were home to students when the residence halls were filled, with an interlude housing Army and Navy personnel during World War II. Beginning in the early 1950s and continuing for about 65 years, the three floors of guest rooms were a hotel.

With enrollment surging and Geoffroy Hall under construction, the hotel closed in the summer of 2016, and students again called the MU home. Students lived in the guest rooms for two academic years, but the residence space no longer was needed after the addition of Geoffroy's nearly 800 beds.

This summer, the state Board of Regents approved an $11 million project to renovate the floors into student services offices and study space, upgrading aging utilities in the process. But planning for that project will take much of 2019, MU director Steve Winfrey said. That gave the facility's ever-changing guest-room floors one more opportunity for reinvention, making use of available space and helping the MU continue to recoup some of the revenue lost when the hotel closed.

On the fourth floor, more than two dozen faculty and doctoral students from the Ivy College of Business are using the former hotel rooms as offices pending construction of a $28 million addition to the college's Gerdin Building, a project the regents approved this summer with expected completion in 2020.

Last month, development and communications staff in the College of Agriculture and Life Sciences moved to the MU's fifth floor, displaced until late next summer by a $2.3 million renovation of Curtiss Hall's third floor.

The study abroad center moved this fall to the sixth floor, leaping at the chance for more space and windows, Winfrey said. Study abroad had been in the east wing of the MU's third floor, which temporarily will house the Center for LGBTQIA+ Student Success beginning spring semester after it moves out of the Student Services Building.

It's not the MU's only recent turn taking in university personnel displaced by construction. The fourth floor held the College of Engineering administrative offices when Marston Hall was renovated from 2014 to 2016.

When the top three floors are renovated, the LGBTQIA+ and study abroad centers will be among the student-focused units relocating there from other MU offices, along with the veterans center, student legal services, the international students and scholars office, and the office for the National Conference on Race and Ethnicity/Iowa State Conference on Race and Ethnicity.

The project, funded by student fees, will gut all three floors -- more than 18,000 square feet -- replacing the segmented room layout and long-outdated electrical, water and mechanical infrastructure. While formal design is just underway, the initial plan is office spaces along the perimeter with collaborative and study areas in the center of floors, Winfrey said. The project may devote an entire floor to a lounge area ideal for studying or just hanging out, he said.

"If you look at the building, there's no major lounge space," Winfrey said. "It's supposed to be the living room of campus, as they say."

The renovated floors should be finished and occupied by February 2022, after about a year and a half of construction, he said.

A friendly kiss
What are you using that's moving to Workday?
CELT announces its first faculty fellows
MU's top floors housing one last round of temporary tenants
Institutional research director search has begun
Budlong joins Inside staff
Holiday packages should be going home