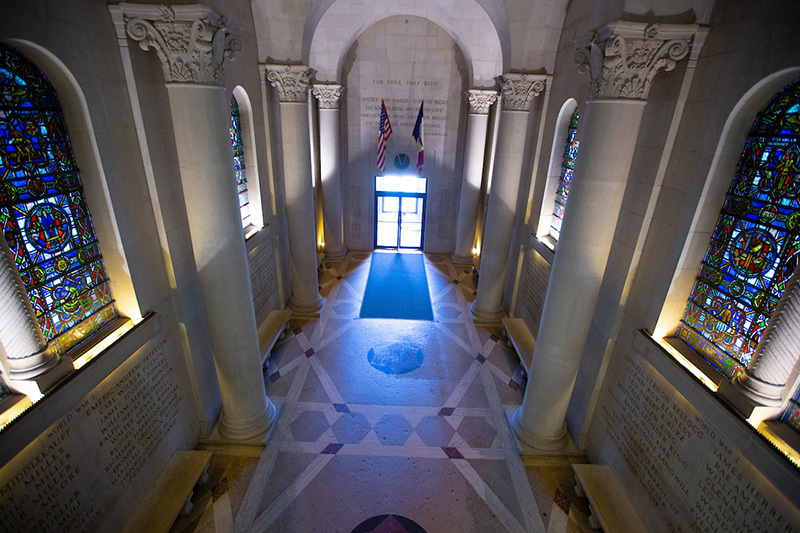 In 1914, Iowa State College student Floyd Wambeam penned an editorial in the student newspaper calling for a student union building on campus.

Fourteen years later as construction of the Memorial Union was completed, Wambeam's was one of 117 names of Iowa Staters killed in World War I engraved on the limestone walls of Gold Star Hall.

As we mark the 100th anniversary of the end of World War I this year, the 2018 Gold Star Hall ceremony will include the story of how the Memorial Union came to be following the deaths of more than 100 Iowa State students and alumni in WWI.

The annual Gold Star Hall ceremony honors Iowa Staters who lost their lives in war. Former students' names are engraved on the Gold Star Hall walls if they attended Iowa State full-time for one or more semesters and died while in military service in a war zone. As names become known, they are added to the wall and the service members are honored in the university's Veterans Day observance.

This year's Gold Star Hall ceremony will begin at 3:15 p.m. Monday, Nov. 12, in the Memorial Union Great Hall. Three servicemen who died in World War II will be remembered:

William Howard Butler, Indianola, studied agricultural engineering at Iowa State in the 1940s. He enlisted in the U.S. Army Air Force three months after the attack on Pearl Harbor, in 1942. He was killed when his plane crashed shortly after takeoff in China in July 1945.

Robert Vance Rannells, Dunlap, enrolled at Iowa State in 1936, studying agronomy. A month before receiving his degree, he enlisted in the U.S. Air Force Reserve. He died in April 1945 when his B-29 bomber went down in the Pacific Ocean near Japan.

Richard Wayne Suesens, Burlington, came to Iowa State in 1937 to study mechanical engineering. He enlisted in the U.S. Navy Reserve in 1938. He was announced missing in action during the Battle of Midway in June 1942, and a year later was declared killed in action.

While their names already are engraved on the wall, these men have not yet been honored in a Gold Star Hall ceremony.

Today, Gold Star Hall includes the names of the nearly 600 Iowa Staters who have died in war: World War I, World War II, Korea, Vietnam, Somalia and in the Global War on Terrorism.

This ceremony is part of a week of events dedicated to honoring veterans.

A full schedule of events is online.