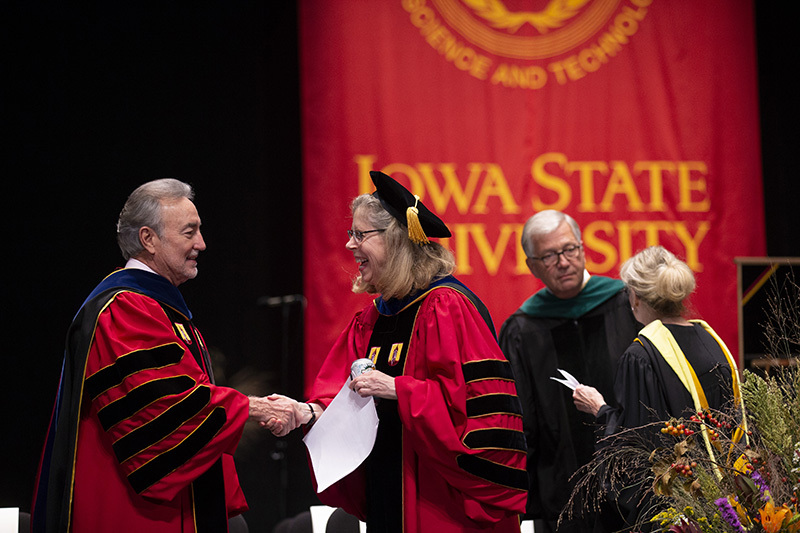 Former President Gregory Geoffroy called some old friends at Iowa State looking for choice anecdotes about President Wendy Wintersteen to sprinkle in his introduction of her at her Sept. 21 installation ceremony -- quirks, funny stories, tidbits that would surprise a campus where she has worked for four decades.

"But alas, I learned very little," said Geoffroy, who served as Iowa State's president from 2001 to 2012. "President Wintersteen is really a straight arrow."

Instead, Iowa State's 14th president heard what he already knew about its 16th, who he appointed to lead the College of Agriculture and Life Sciences in 2006 and encouraged to seek the presidency when he retired. Geoffroy said colleagues described Wintersteen as hard-working and thoughtful, a sincere listener who is disarming and humble, yet cordially decisive.

"She has a way of telling you 'no' and somehow making you feel really good about the decision when you leave her office," Geoffroy recalled Distinguished Professor in Agriculture and Life Sciences Max Rothchild telling him.

"Quarter and Dime were just too rich," he joked.

Wintersteen's tenure at Iowa State includes time as an extension staff member, graduate student and faculty member before rising through the administrative ranks. The love she has for the institution is clear, Geoffroy said. The university is fortunate to have her leadership, which is ideally suited for the challenges at hand, he said.

"President Wintersteen is exactly the right person to be at the helm of Iowa State at this time in its history," Geoffroy said.

Geoffroy was one of several speakers to offer greetings or remarks during the ceremony. Here are highlights from what others said about Wintersteen:

"Your compassion and concern for others is contagious. You've made a tremendous difference for students, faculty and staff for nearly 40 years at Iowa State University. Moving forward, I have no doubt your influence will continue to serve as a catalyst for improving people's lives."

"The day I announced that Dr. Wintersteen would be the Iowa State's 16th president, and its first woman president, will always be a highlight of my own presidency as well as for many of my fellow regents."

"In the time that we have worked together, I have recognized the passion you have for improving the student experience and reminding us that students are the heart of this university."

"President Wintersteen, you are, and you have been for a long time, one of us."

Center for Excellence in the Arts and Humanities, Oct. 4

A compilation of auctions and events to support the local United Way campaign.