The kitty poster rule and other free speech reminders

"I know in my heart that the First Amendment is a fundamental principle upon which our government and our society is based. But also, I see on a daily basis the impact of the First Amendment on individuals on campus," Norton said in a recent faculty development workshop on free speech and academic freedom. "That's a tough position to be in a lot of times." 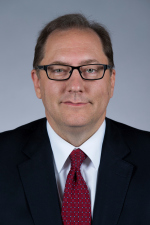 Despite the discomfort, Norton said university officials should resist the temptation to "begrudgingly" defend free speech rights as merely following the law.

"We ought to willingly accept and champion the fact that we are a campus that adheres to and believes in, as one of its founding principles, the preservation and advancement of the First Amendment. It's critical. It's important to higher education," he said.

In the Feb. 23 workshop, "The Public Classroom," Norton outlined how speech protections come into play on campus. Here are some of the basics from his presentation:

At a public university such as Iowa State, faculty and staff are agents of the government. Actions ISU workers take to limit or punish expression are government restrictions on speech. The First Amendment bars the government from restricting most speech, though some rules can be established. Those rules can't consider the content of the message.

The university -- i.e., the government, you -- can set reasonable restrictions to limit the time, place and manner of speech. The rules must be consistently applied, regardless of the views expressed. What's reasonable? Consider how most people would regard the rule if they read about it on the front page of the Des Moines Register, Norton said.

There are a handful of exceptions to the broad constitutional protection of viewpoints, but they all are narrow. For instance, speech inciting imminent law-breaking or violence can be regulated. But courts have rejected arguments that racial slurs and cross-burning are fighting words, Norton said. True threats aren't protected speech, but they must be believable, specific and targeted.

Harassment isn't protected, but it must be severe and pervasive conduct creating a hostile environment that substantially interferes with the target's employment or education. A single incident alone typically wouldn't amount to harassment, Norton said. "It's a tough area," he said. "Typically, restricting speech is not how we do it. We address impact."

Norton often has to disappoint students who expect the university to be able to regulate hateful speech. "Hate speech is protected speech," Norton said.

"If you've been taking down the kitty poster, then you can take down the white supremacy poster," he said.

For more on disruptions

An instructor can set speech-restricting classroom rules to prevent disruptions as long as they're reasonable, content-neutral and uniformly enforced. Consistency is key.

"They tend to only be applied when you also have a problem with the content of the speech," Norton said.

Talking about your political beliefs is fine, as long as you allow students who don't agree with you to speak and don't grade them lower for their views. While the university's academic freedom policy, found in the Faculty Handbook, offers wide latitude in teaching, discussing, researching and other academic pursuits, it does not protect inappropriate classroom conduct that's not germane to the subject at hand.

"The institution can have rules about how you teach and what you teach," Norton said.

Though Iowa State is a governmental body, it also is an employer. Public employees' First Amendment rights can be limited in the course of their official duties. Workers can be disciplined for what they say or do.

Outside of that context, university employees are afforded the same constitutional free speech rights as anyone else as long as you're speaking as a private citizen about a matter of public concern. That's true even if your opinion runs contrary to the university's institutional views, Norton said. Public discussion about private matters related to your official duties isn't protected speech, however.