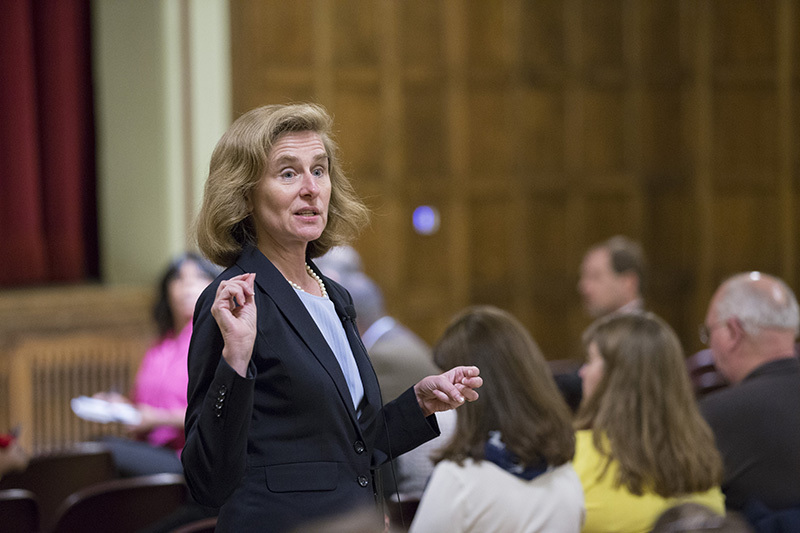 Pamela Whitten, provost and senior vice president for academic affairs at the University of Georgia and a finalist for Iowa State's presidency, speaks at an open forum Oct. 10 in the Great Hall of the Memorial Union. Photo by Christopher Gannon.

Iowa State is at a critical juncture that demands bold, ambitious goal setting to elevate the university from excellent to exceptional, the University of Georgia provost said in the second of four public forums for Iowa State's presidential finalists.

"The university is very good, and it's really moved up in a lot of ways, and yet it's at a crossroads," she said.

Whitten outlined specific metrics that would indicate enhanced stature and educational quality. She said Iowa State should aim to:

Citing a desire to be "direct and candid," Whitten said she was concerned about Iowa State's continued inclusion in the American Association of Universities, the prestigious 62-member group of top U.S. and Canadian research universities. "Iowa State needs to do a little bit of work to put itself in a place where it doesn't have to worry about that," she said.

She endorsed a new initiative at Georgia that offers more than 100 programs for simultaneously earning bachelor's and master's degrees as a "large-scale, difference-making" opportunity for students entering a workforce that increasingly requires a master's degree.

After 20 minutes of prepared remarks, Whitten took questions for about 40 minutes. Here's what she said on a handful of topics:

In explaining the motivation for encouraging timely degree completion, Whitten noted extended time in the classroom hurts students by delaying their careers and saddling them with more debt.

Given the rising cost of higher education, fundraising for need-based scholarships is a high priority, as is establishing an emergency fund to make sure students don't drop out over a cash shortage of a few hundred dollars.

"We have discovered that's more common than people are willing to admit," she said.

Mental health also is a booming concern for college students, said Whitten, who has an academic background in communication technology in health care.

"It is ramping up so quickly that everyone is struggling, frankly, to keep up with the need across the board," she said.

Flagging state funding is a challenge for nearly all public universities, Whitten said, and she doubts that will change.

"Creative revenue generation is just part of standard operating procedure for higher education today. We really live in a different time," she said.

An important strategy to create revenue opportunities is to do a better job communicating the university's return on investment and public benefit, she said -- an impact well-known on campuses that over time have become too insular.

"We smiled, and we felt very good about it, but we forgot to make sure everybody else knew about it," she said.

Given the sharp increase in Iowa State's enrollment in the last decade, Whitten said it makes sense to "catch our breath now" and study the impact of a much larger student body. Faculty-student ratios might be of particular concern in specific programs, she said.

"It sounds like that's a really significant issue in engineering," she said.

Asked how she would bolster educational quality despite dwindling state support, Whitten acknowledged that tuition at Iowa State is "the lowest I've seen it," though she added she wouldn't take a position on tuition rates without a thorough examination.

Proactive conversations among students, faculty and administrators are key to making a campus welcoming and inclusive, Whitten said.

As a provost, Whitten said she hires two undergraduates to identify and create situations where she can interact with students. As a former resident assistant in a dormitory, she especially likes meeting with RAs, she said.

Programs to assist students who are historically disadvantaged are important, she said, but so is getting the word out about those resources.

"We're such big places, a lot of times there's a lot of noise and we don't even understand all the activities and services that are going on," she said.