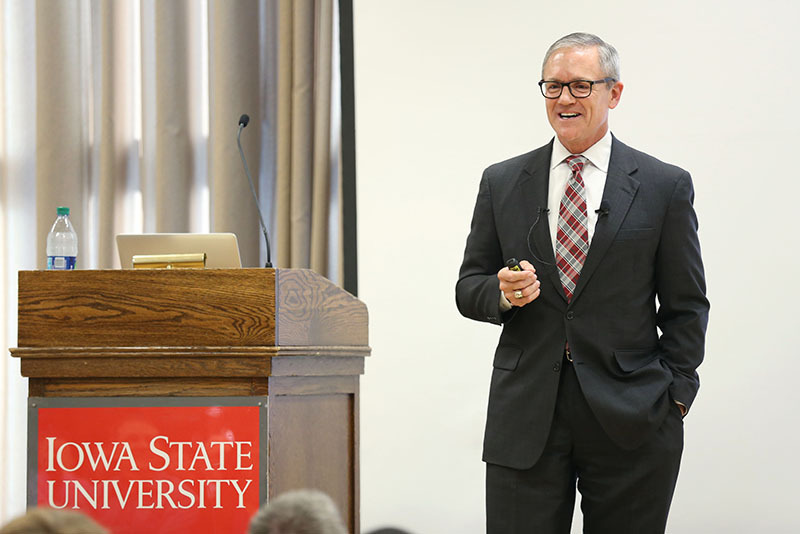 Dale Whittaker, provost and executive vice president at University of Central Florida and a finalist for Iowa State's presidency, speaks at an open forum Oct. 11 in the Sun Room of the Memorial Union. Photo by Christopher Gannon.

Building on existing strengths, Iowa State should tackle world hunger and improve the availability of its high-quality undergraduate education, the University of Central Florida provost said at the third public forum for Iowa State presidential finalists.

One of Whittaker's three broad university goals is ending world hunger and creating a sustainable future, a challenge he said Iowa State is uniquely qualified to take on.

Though many of its fellow top research universities in the Association of American Universities have paid less attention to undergraduate learning in recent years, Whittaker said Iowa State has "magically" maintained that focus while remaining devoted to research. One of his three aims for Iowa State is to provide the best undergraduate experience of any AAU school.

Whittaker spoke for about 35 minutes before taking questions for about a half hour. Here's what he said on a handful of topics:

At Central Florida, Whittaker said it was a struggle to increase first-year retention rates over 90 percent, despite numerous support programs. To exceed that mark took improvements in the classroom, which meant hiring more professors, he said.

"The role of talent and intellect and passion and drive in a research-based university is so dominant that focusing on our faculty and strengthening faculty becomes a high priority," he said.

Schools are just beginning to realize how often small financial obstacles can derail a college education, Whittaker said. At Central Florida, officials now reach out to students who have course registration holds due to unpaid bills. A program that offers small bridge loans to students also is important, he said.

"It has to be done with compassion, discretion and on an individual basis," he said.

"It's an excellent proposal," he said, though he acknowledged it would shift a greater burden to students' families.

Being a voice for the value of higher education as a whole is the best approach to advocating for greater public investment in Iowa State, Whittaker said.

"I think it's doable, and I've seen it done at other institutions," he said.

If a university does work that has impact, reputation and rankings will follow, Whittaker said. Efforts to increase a school's rankings for that sake alone often are short-lived, he said.

"In order to do big work and make heavy lifts, at least in my experience, it has never been done alone," said Whittaker, whose academic background is in agricultural engineering.

Wider perspectives are also a natural product of diversity, which leads to better decision-making, he said.

"It's why every company -- every knowledge company -- focuses on diversity," he said.

In Whittaker's three years at Central Florida, the university has hired about 230 new tenure-track faculty. But it also has been careful to keep up with staff positions, hiring 25 professional and scientific employees for every 100 faculty, he said.

Without promoting inclusion, efforts to increase diversity are hollow, Whittaker said. A modern land-grant university must be inclusive, he said.

For university leaders, inclusiveness requires engaging and supporting students without marginalizing them, he said.

While campuses must allow divergent ideas to stimulate intellectual growth, they also must have plans and act quickly if they expect speech could lead to violence, he said.

"I believe that at the end of the day, inclusion will always win," Whittaker said.