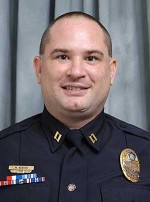 Michael Newton will be Iowa State's next chief of police, an expanded role that also includes an assistant vice president post that reports to senior vice president for university services Kate Gregory. His appointment is effective April 3.

Newton has served in the University of Wisconsin, Madison, police department since 1998, climbing the ranks to captain in 2010. He has experience in emergency management, patrol, and planning and development. Newton currently oversees the field services division, which includes approximately 100 officers and employees.

"Michael brings strong experience in community collaboration and emergency response to Iowa State," Gregory said. "We had a diverse, broadly experienced and talented group of candidates from across the U.S., and the search committee had a very hard job. ISU has an outstanding police force and Michael's background and experience will make it even stronger."

Newton will oversee the public safety department, which includes the police and parking divisions. In addition, his responsibilities will include community engagement and outreach; emergency planning and management; threat assessment and response; and Clery Act compliance.

Newton earned a criminal justice degree from Mount Senario College, Ladysmith, Wisconsin; a master's degree in administration of justice from the University of Louisville, Kentucky; and a Ph.D. in business administration from Northcentral University, Prescott Valley, Arizona. He succeeds former police chief Jerry Stewart and Aaron DeLashmutt, who has served as interim chief since Stewart's retirement in 2015.