Iowa State will ask the state Board of Regents next week to consider differential tuition for juniors, seniors and graduate students in five programs: animal science, biology, computer science, industrial design and natural resource ecology and management. The proposed differentials -- $1,600 in the undergraduate programs and $1,124 in the graduate programs -- would be implemented over three years. The differential tuition in 2017-18 is a proposed $534 for undergraduates and $374 for graduate students. The increases reflect higher instruction costs of special laboratory, studio and other hands-on styles of learning. In the case of animal science education, the additional tuition will help pay for livestock purchase and care expenses.

The board meets Oct. 19-20 in Cedar Falls. The agenda and supporting documents are online. Audio of all open portions of the meeting will be streamed live on the board's website.

The 2017-18 year also is the second of three years that tuition for all international students will increase an additional $500 per year above nonresident tuition increases.

Iowa State is proposing to name the nearly complete "Buchanan II" residence hall for former president Gregory Geoffroy (2001-12). The naming would recognize Geoffroy's role in the expansion of the university, including a dozen major building projects, a capital campaign that raised more than $800 million and doubled endowed faculty positions (to 150), and record enrollment and sponsored funding levels. Geoffroy also launched a grassroots fundraising effort to save and renovate Morrill Hall. The proposed Gregory L. Geoffroy Hall will add 784 beds to the residence system when it opens spring semester.

Iowa State also proposes to sign new five-year leases (Aug. 1, 2017-July 31, 2022) with Jensen Properties (for 828 beds in southwest Ames) and American Campus Communities (299 beds in Legacy Tower on Stanton Avenue), for a total of 1,127 beds in off-campus apartments. This is down from the 1,462 beds the residence department currently leases from the two firms; those leases expire next summer. The residence department would continue to furnish and staff these apartment locations as it does its on-campus apartments.

The proposed leases contain a 15-month opt-out clause for either party, giving Iowa State the option to terminate a lease if demand for university student housing decreases.

The board staff will report on two bond sales, for which bids will be opened the morning of Oct. 20. The first is an estimated $16.5 million of dormitory revenue refunding bonds. They'll replace refunding bonds sold in 2006 to refinance bonds sold in 1999 and 2000 that financed phase two of the Frederiksen Court student apartments. Lower interest rates on the 2016 bonds could save the university more than $2 million.

The second is an estimated $23.4 million of utility system revenue and refunding bonds for two purposes: to partially fund a $22 million project to increase chilled water capacity on the west side of campus and to refund 2006 bonds issued for a chilled water project at the College of Veterinary Medicine. Lower interest rates could save the university an estimated $0.5 million.

In other board business: 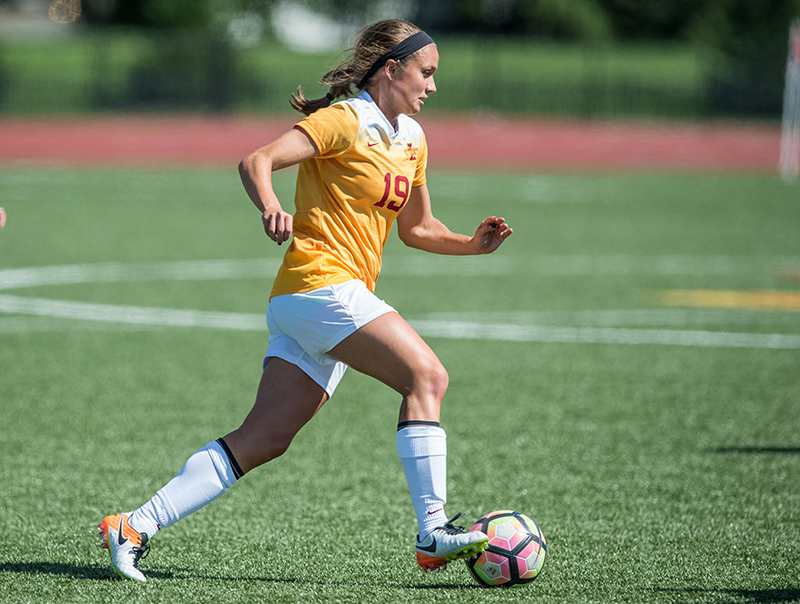 The Cyclone soccer squad has just two more home games in its 2016 regular season -- both this week.