"The Iowa State University Faculty Senate strongly believes in the principles of shared governance and the importance of faculty input in the management of university affairs. We wholeheartedly reaffirm our commitment to openness and transparency. These fundamental principles should unite the Board of Regents of the State of Iowa and the three Regents universities. We support ongoing dialogue between the University of Iowa Faculty Senate and the Board of Regents to re-establish trust and confidence that faculty input is important and respected."

The Faculty Senate launched the 2015-16 academic year by affirming the importance of shared governance and "faculty input in the management of university affairs."

In a statement introduced by secretary Annmarie Butler, the proposed language established the senate's support of "ongoing dialogue between the University of Iowa Faculty Senate and the Board of Regents to re-establish trust and confidence that faculty input is important and respected."

Senators approved the statement on a split vote. It will be sent to Iowa's Faculty Senate, state Board of Regents president Bruce Rastetter and President Steven Leath.

Provost Jonathan Wickert opened his report with remarks about an incident outside Jack Trice Stadium on Saturday. A video captured an individual intentionally ripping a sign held by a member of a student group protesting presidential candidate Donald Trump's immigration statements.

"We're still in the process of gathering information about exactly what happened," Wickert said. "But what we know is that these people that broke up the peaceful demonstration were flat-out wrong and very hurtful in the actions they had. What they did works against what all of us work toward every day -- to make our campus a better, more inclusive place that respects people, regardless of their backgrounds, ethnicity, gender, religion, sexual orientation,or their political views."

Wickert encouraged faculty to read President Steven Leath's statement and use the incident as a "teachable moment" to further the conversation about the issues.

Discussion on proposed Faculty Handbook changes to PRS (personal responsibility statement) guidelines will continue. Revisions introduced and debated last spring prompted a motion to postpone a vote until this fall.

She said most objections and concerns raised about the changes include:

Dark said many more issues with the proposed changes have been received and she welcomed more input.

"It's quite clear that there is still a need to communicate some of this back to your departments, to discuss this with your colleagues, bring back additional concerns," said senate president Rob Wallace.

"The hope is, in October, to come back with a revised set of recommendations that we can use to effect changes in the Faculty Handbook," he said.

Three docket items were introduced and will be voted on next month: 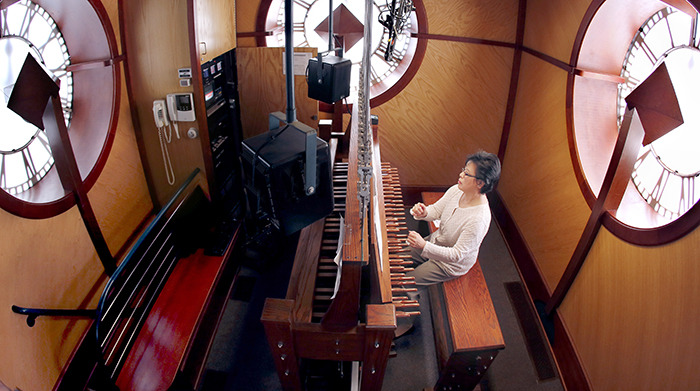 Music in the air

A collaborative concert will kick off the Midwest Carillon Conference on Friday.