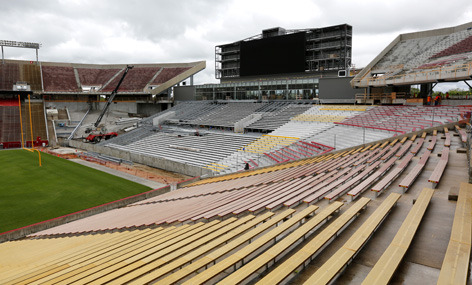 An interior view of the bowled-in south end zone at Jack Trice Stadium. Work is on schedule to wrap up by Sept. 5. Photos by Christopher Gannon.

Work on the south end zone addition to Jack Trice Stadium is on schedule to be completed in time for the Cyclone football squad's first home game on Saturday, Sept. 5.

"We're now to the point that – unless something out of our control comes up – we feel comfortable with the remaining construction schedule," said Chris Jorgensen, senior associate athletics.

The club facility is enclosed, most of the interior framing is complete and some finishing work is underway. Jorgensen said getting the first-floor kitchen completed and operable is "probably our biggest challenge" this summer. The new kitchen will serve not only Sukup End Zone Club members, but also guests in the stadium's other suite and club sections.

Crews have begun installing seats on both the upper and lower levels of the south corners. Paving was scheduled to begin this week on the exterior south plaza and sidewalk ramps from the plaza up to the east and west concourses will be poured in June.

Four restroom buildings are being added on the stadium's concourse level. Including interior restrooms in the club facility, Jorgensen said the stadium will have an additional 200 toilet or urinal fixtures.

Jorgensen said fans have purchased more than 2,000 of the available 3,000 season tickets in the Sukup End Zone Club section, "and we're very excited about that start."

The expansion "bowls in" the south end of the stadium, creates a new south entrance and continuous permanent seating on the lower level, and adds upper-level seating in the south corners. It replaces the former south bleachers and two hillside areas with 13,000 permanent seats, which includes the end zone club seats. End zone club ticket holders have access to a two-story, indoor club facility, the top level of which will overlook the field.

The project also includes a new south video board and an electronic ribbon board around the stadium.

Next phase is still a concept

Jorgensen said that a companion entry way project to replace what now is mostly parking lots separating the stadium and Reiman Gardens, still is in the design phase. He said south stadium lots will be available for fan parking this season. The two phases, totaling $60 million, will be covered by a February $32 million bond sale and $28 million in athletics department private gifts and annual revenues. 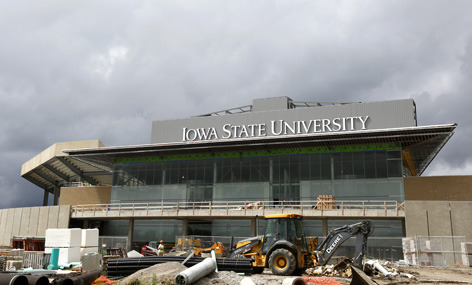 The south exterior of the club facility. 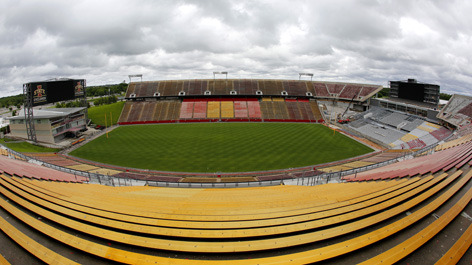 Jack Trice Stadium, shot from the west upper level with a fisheye lens.

CSI: Ames
A pig that could benefit human medicine