Leath: FY16 budget will be shaped by four priorities

Iowa State's operating budget for the year that begins next July will be shaped by the four broad priorities President Steven Leath first presented two years ago during his installation: Ensure a successful experience for students, enhance the university's research profile, support state and regional economic development, and ensure a welcoming, safe and inclusive campus environment. Leath noted then that the priorities would be multiyear, requiring repeated investments of money and effort.

In a memo last month, Leath reiterated the four priorities to the three senior vice presidents who are developing their division budgets in the next few months.

"My focus since coming to Iowa State primarily has been on raising the profile of the university. Over the past couple of years we have made great strides and established a lot of momentum in moving Iowa State to the next level," Leath wrote.

Preliminary budgets are due in the president's office on Feb. 5, 2015, with updated proposals due April 10. The 2015 Iowa Legislature goes to work on Jan. 12.

In his memo, Leath also referenced the May reports of the Student Experience Enhancement Council (PDF) and the Committee on Enhancing Institutional Excellence (PDF), groups working since November 2012 to develop strategies that reinforce the broader priorities. Leath told his senior VPs that their FY16 budget proposals should include investments in items from those groups' action plans. These include proposals for more academic advisers, further development of the library's digital repository, additional faculty positions in high-demand programs, staff positions to support larger, more complex research projects, efficient use of classroom spaces, IT upgrades and more student support services, among others.

Most of the new dollars in the FY16 operating budget will come from two sources: state appropriations and tuition increases. Tuition rates for the 2015-16 academic year, approved last week by the state Board of Regents, will generate estimated additional revenue of $3.5 million at Iowa State.

For the fiscal year that begins July 1, Iowa State has requested the following increases in state funding:

The state Board of Regents has requested an additional $6.3 million for Iowa State (and $6.6 million for the University of Northern Iowa) next year as part of a three-year phased implementation of its new performance-based funding model. University leaders plan to use the additional funding to better serve a growing student body, with a focus on two goals:

Iowa State's largest single capital request to the state is $8 million to begin work on a proposed $80 million student innovation center that would facilitate large-scale student interaction, experiential learning and co-curricular activities across all colleges. The funding proposal for the center includes $32 million more in state funds over the subsequent three years (FY17-19), leveraged with $40 million in university funds and private gifts such as the anonymous gift announced Dec. 3. 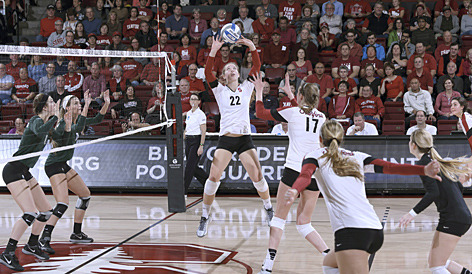 Top-seeded Stanford is among the field of four teams participating in the Ames Regional.

Stephens is the site of three Nutcracker Ballet performances this weekend.